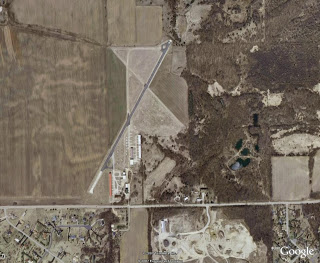 I was scheduled to fly on Tuesday but, the winds were gusting over 30 knots so we pushed the flight to Wednesday at 3PM. The plan was to go to Westosha for some more landing practice.

On the way there, I was under the hood. Actually, I bought a pair of foggles and used them this time. I like them better than the hood but, I noticed that there was more glare from the sun than there is with the full hood. When flying west, it was just a little harder to read the instruments because of that glare.

The wind was favoring runway 21 so it was an easy pattern entry from the east. Like last time, my first couple soft field ladings were pretty good while the next three were a little harder. It is because I am experimenting with different flare heights and attitudes which, while educational, don’t necessarily result in the softest touchdown. Don’t get me wrong, none of these landings were hard, they just weren’t as soft as the first two.

On the way back to Waukegan, we practiced with the KAP 140 autopilot. Mostly it went as expected except that neither of us could get it to level off at a preselected altitude. I have to re-read the manual section about altitude preselect. I have another flight scheduled today and we can try it again then.

This flight was in 408ES which only has a single axis autopilot so, we couldn’t try the altitude preselect again.

We went back to Burlington for some more short filed work. I got still more hood time on the way there. Sandy piled on more distractions this time but, I managed to keep up OK. Once at BUU, we did four short field landings on runway 29 then switched to the turf strip for one soft field. No big problems with any landings today. It was mostly just refining my speed control on final.

On the way home, Sandy pulled the power at 3200 feet. I trimmed for 65 knots then hit the nearest button on the GPS. It told me Westosha was 4.7 miles away so I turned toward that airport. I didn’t think we would make it that far so, I picked out fields between us and the airport to use as alternates. As it turned out, I was so worried about coming up short of the runway that I ended up way high on final. I would have landed very close to the far end of the runway or overshot it completely. I have to get better at judging those long power off descents. As Sandy said, it is a matter of experience and, we just don’t get a lot of practice doing it.

One more flight Sunday then the re-test on Monday – weather permitting.