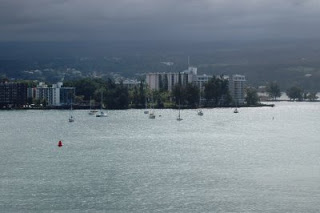 Hilo, Hawaii – After our five sea days, we made our first port call at Hilo. I was out on the balcony as the ship entered the harbor and tied up to the pier. I wanted to see the mountains inland but, a moderately dense layer of vog limited visibility. This cloud of sulfurous volcanic gas would be with us for most of the trip. Usually, the gases from the Kilauea volcano blow out to sea on the trade winds. A few times a year though, the islands get a Kona wind which blows from the south east and spreads the vog up the island chain. That is what we had for the first several days of our visit.

Georgia and I had an early breakfast then got off the ship. Our excursion wasn’t until 10AM but, because of the same Jones act that had forced us to board the ship in Mexico, everyone on board had to report to the Pharaoh’s Palace theater, with photo ID in hand, to clear U.S. immigration. We presented our passports and were given a sticker to wear where it would be visible when we again presented our photo ID upon exiting the ship. Bureaucracy in action.

As soon as we got through the immigration line, we went directly to the gangway and off the ship. Both of us were anxious to get our first close up look at Hawaii. There is no passenger terminal at Hilo but local crafters and merchants had set up sales tables in the warehouse building that was being used a temporary terminal. This was also where our first greeting by hula dancers. Before we knew it, it was time to check in with Blue Hawaiian Helicopters for the Circle of Fire tour. 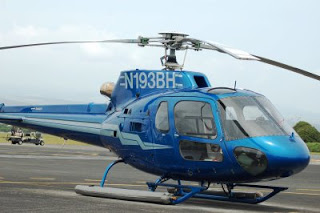 A van took us to the Hilo airport where we got a short safety briefing and then were led out to the ramp to join our pilot and one other couple in the helicopter. I lucked out and got the front seat which not only gave me a good view outside but also of the aircraft’s panel. It was fun to follow along on the instruments and GPS.

After takeoff, our flight took us over the city of Hilo, and the harbor where our ship was docked. We saw streams and waterfalls, fields of banana, guava and coffee and much more. 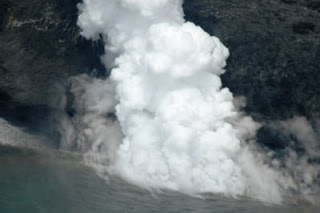 The main attraction of the tour was the volcano and the lava fields and that is where we spent the most time. It is a pretty bleak place with clouds of volcanic gases escaping through vents in the black lava. We saw the former location of the town of Kalapana and the Royal Gardens subdivision which were buried by a 1990 eruption. A paved road just ends at a ledge of lava with nothing but the new rock beyond. The only house now remaining in the area is a Bed & Breakfast owned by Jack Thompson. The consensus is that, sooner or later, his house will also be lost to the hot lava.

Our volcano tour ended at the coast where we got a close-up look at the columns of steam and gas that we had seen from the ship the day before. From there we followed the coastline back to Hilo and the airport. After we exited the aircraft, our pilot Wes invited me to try out his seat. It is awkward to get in around cyclic stick but, once in, the seat is roomy and comfortable.

Back in the office, we purchased a video of our flight then were taken to the pier in the Blue Hawaiian Helicopters van. 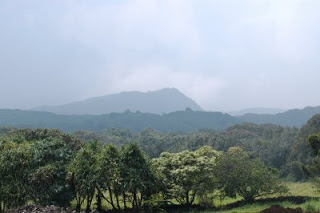 Kahului, Maui – Our second full day in the islands brought us into the port of Kahului on the island of Maui. We had to make an early start because our tour for the day would last for over nine hours and started at 8AM. We were taking the Heavenly Hana tour along the road to Hana and beyond. The road to Hana has over 600 sharp curves and 54 one lane bridges. Once past Hana the road gets even worse. It is very rough and even unpaved in some sections. The vog was with us here too so the visibility wasn’t the greatest. The haze obscured clear views of the mountains but the scenery was still spectacular. We had thought about renting a car for the drive but, in the end, we were glad someone else was concentrating on the tricky road so we could enjoy the scenery. 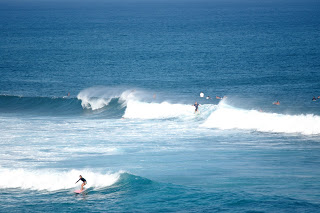 Even this early in the morning, the wind was starting to pick up and the surfers were out. We saw many of them as we passed the beaches near Kahului. Our trip was a little late in the season so, these were about the best waves we saw. The really big ones come in the winter. 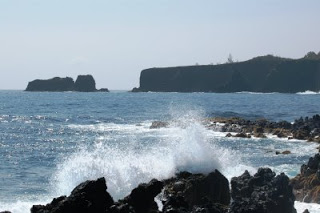 As our drive continued along the shore, we got away from the sandy beaches and came to more rocky shorelines. The contrast of the black lava rock and blue sea was striking. Shortly after this photo spot, the road started climbing and we got away from the ocean for a time. This is where the curves really started. 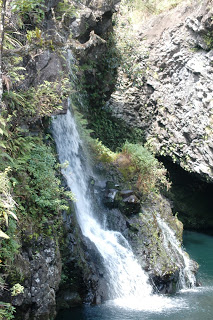 We kept our eyes moving from side to side to catch one beautiful scene after another. Small streams and waterfalls were common and the water action is what is carving this spectacular landscape. We made a stop at the Palapalo Ho’omau Church Cemetery in the little town of Kipahulu where we visited the grave of Charles Lindbergh. Just a few miles past that, we arrived in Hana itself and stopped for lunch at the Hana Ranch. 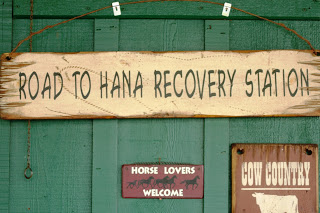 After lunch, our tour continued past Hana. In addition to several photo stops, we visited a flower farm, a winery and Ulupalakua Ranch Store before we arrived back at the pier in Kahului. We had made it back just a few minutes before dinner time and had considered skipping the dining room but, as we walked back to the gangway, Georgia and I heard someone yelling our names. We looked up to the seventh deck of the ship and saw our our dinner table mates, Paul and Sally, waving to us. We made a quick stop to drop off our cameras in the cabin and then went on to the Empire dining room where we were just a few minutes late but able to share the days activities with our companions. 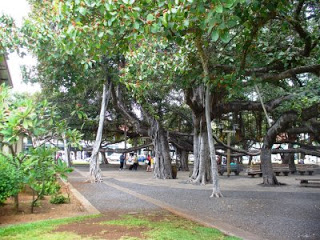 Lahaina, Maui – The main activity for today was whale watching. Lahaina was the first of two tender ports meaning that the ship anchored offshore and the ship’s crew used the life boats to ferry us ashore. Our tour would leave from the same pier the tenders docked at but not for a couple hours. We located the tour company slip and then did some exploring of the town. The courthouse square near the harbor is the location of Hawaii’s largest banyan tree and it really is impressive in size. The day was getting warm so a few minutes in the shade of the tree were welcome. 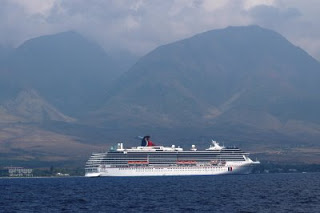 We made the short walk back to the pier and boarded the Lahaina Cruise Companies boat Kaulana Maui for our tour. Late April is the end of the whale watching season but, there were many of the animals still in the area. In fact, I had seen a couple from the ship that morning. From the whale watching boat, we saw ten or twelve. I was hoping to see some breaching but we only saw a couple babies jumping and tail slapping. Still, they were big enough to make quit a splash. A couple rain squalls came through while we were out forcing us inside the boat for a while. They were short though and soon we were back on the deck watching the whale show. The tour was over too soon and the captain turned us back toward shore. As we cruised back into the harbor, we got a good look at the Spirit anchored off the Lahaina shore.