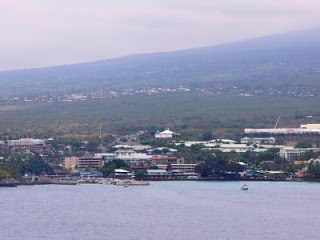 Kailua-Kona, Hawaii – We had no pre-planned tour in Kona so it was a shopping day. Getting off the ship proved to be more difficult than expected though. This was another tender port but rough waters were making getting everyone ashore a slow process. At one point, tendering was stopped while the crew switched the operation from the port side of the ship to the starboard side where the boats would be more shielded from the wind. Since we didn’t have to be on shore at any particular time, we just waited until the lines to disembark got shorter.
When we did get down to the tendering platform we could see just why the process was taking so long. The lifeboat tied to the platform was moving up and down with waves that were close to five feet high. The deck of the boat would drop to over two feet below the platform and then rise to more than two feet above it. We had to time our step so that we made it as the two surface came into alignment. Two crew members on the ship side and two on the tender were helping everyone make the crossing safely. They did an excellent job but, it was slow going as each passenger had to wait for just the right time to make the transfer. Everyone was understanding and patient with the process and eventually we left the ship. The landing on the shore side was much easier than the loading. The boat docked in a sheltered area where the water was almost flat.
Georgia had been looking forward to a trip to Hilo Hatties so we got onto one of the stores free shuttles just as soon as we got off the tender. After a couple hours at the store we, and our shopping bags, took the shuttle back to the pier. Our priority now was lunch so we asked around about a good place. Quinn’s seemed to be the popular choice so that is were we went. It is a friendly place with nice atmosphere and good food. If you are in Kona, I recommend you try Quinn’s Almost by the Sea Restaurant.
The area along the shore is lined with small shops so we did more shopping there after lunch. Kona was our shortest stop with the last tender going back to the ship at 4:15PM. We didn’t want to get caught in a long line so we caught a boat at about 3:30. The sea was much calmer by that time so the transfer back to the ship was no problem. 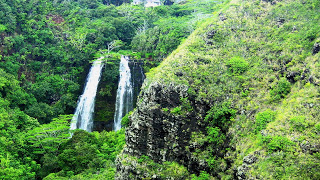 Nawiliwli, Kauai – Kauai was our third island of the trip. The tour for the day was a two parter. First up was a Wailua River boat tour. On the way to the boat dock, the tour bus made a photo stop at Opaeka’a Falls Lookout for a look at this double water fall. There is no boat or trail access to this waterfall so the lookout is the best spot for viewing it. 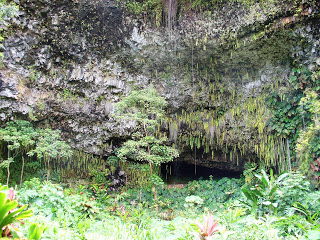 We continued on to the dock and boarded the tour boat. The trip is about thirty minutes from the dock to the Fern Grotto. A trio of singers and a lovely hula dancer entertained us on the way there. Once at the grotto, we got off the boat for a short walk from the dock to the actual site. The grotto is a popular location for weddings so, our entertainment group treated us to a performance of the Hawaiian Wedding Song while we were there.
The trip back to the boat dock was the narrative portion when we learned about the history of the area and about the plants growing along the banks of the river. Like so many places in Hawaii, we also heard about all the movie scenes filmed along the river bank. 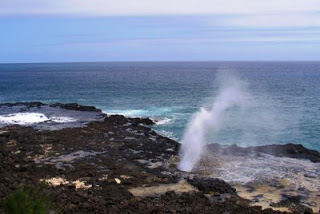 Part two of the day’s tour was a bus trip to Waimea Canyon State Park. Along the way, we made stops at the Spouting Horn blowhole, Koloa Sugar Mill (ruins of Hawaii’s first sugar mill), Captain Cooks monument, and a fantastic lunch stop. This buffet lunch was absolutely the best we had on any of our tours. After lunch, we continued on to the canyon lookout. 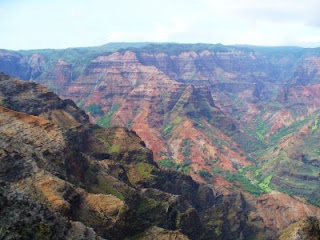 Waimea Canyon has been called the Grand Canyon of the Pacific. At 10 miles long, a mile wide and 3,500 feet deep, it is impressive. The wide spectrum of colors in the rock and vegetation makes for some spectacular views. We spent close to an hour at the look out but it still wasn’t enough time to take it all in.
Our driver was silent has he concentrated on the winding road back down to sea level and soon after we were back at the ship. Tonight was another elegant night dinner and tomorrow would be our last full day on the ship. 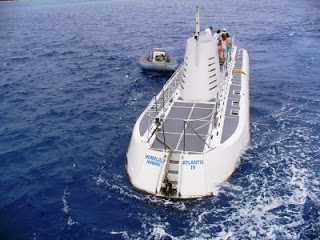 Honolulu, Oahu – This was our fourth island and our last port of call. The Spirit would be spending a few days here so debarkation wouldn’t be until the second day in port. For the first night, we could use the ship as our Honolulu hotel.

I tried, but I couldn’t convince Georgia that climbing down into a small, confined space that sinks to the bottom of the ocean was a good idea. So, I would be taking a ride on the Atlantis submarine by myself. I had wanted to try a trip in one of these subs for a few years so, I was looking forward to this excursion. 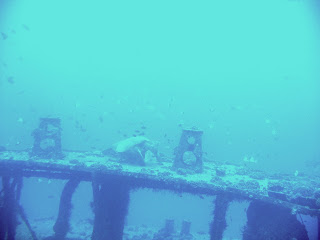 A trolley picked the group up at the pier and took us to Waikiki where we got on a boat for the trip out to the submarine. We watched the vessel surface and the previous group of passengers get off and board our boat. Then it was our turn to enter the sub. The seating is close but not cramped and each seat has a view port for good visibility. With everyone seated, we cast off and sank beneath the surface. By the time we got to the 50 foot level, almost all the color to the red end of the spectrum had disappeared so everything looked greenish blue. It is actually easier to see objects than it is to photograph them. The camera just doesn’t record as well because of the lack of contrast from the compressed spectrum. The human eye and brain do a better job of compensating.
We passed by several artificial reefs, two sunken ships and a couple sunken airplanes that were all swarming with sea life. These are not wrecked vessels but were sunk intentionally to provide underwater habitat. Without them, the ocean bottom off Waikiki would be pretty barren as we could see in the areas in between. When the submarine touched the bottom at 120 feet, there was nothing to see but sand and rock Near the structure though we saw fish, turtles, starfish, eels and more.
Back on the surface, we exited the sub and re-boarded the service vessel for the ride back to shore and the trolley trip back to the ship. While I was gone, Georgia had packed most of our suitcases. We would be putting them outside the door later so the porters could have them in the terminal when we exited the ship in the morning. Before that, we had one last dinner with Paul and Sally and caught our last show in the Pharaohs Palace. Our cruise was coming to and end but, at least, we still had more vacation to come.
Previous Post Hawaii Cruise – Part 2 Next Post Hawaii Cruise – Part 4