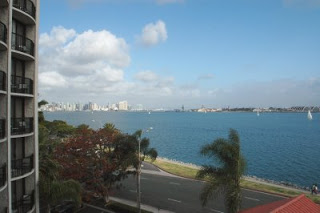 Chicago to San Diego – We left Chicago O’Hare for San Diego early on Saturday, April 11. Our cruise didn’t start until Sunday but we flew out a day early to avoid any airline delays that might cause us to miss the ship. Spending the night at the Hilton San Diego Airport/Harbor was our insurance policy. We checked into the hotel early in the afternoon and had time to relax and explore the harbor shore before dinner in the hotel restaurant. We spent the rest of the evening organizing and tagging our luggage for the cruise and just unwinding. I did get outside to take a few photos though.

San Diego to Ensenada and embarkation – I woke up early Sunday morning and saw that the Carnival Spirit was already in port. It was strange to have the ship we would travel on so close but know that, because of the Jones Act, we would not be able to board here in San Diego. Although Carnival is a U.S. company, it’s ships are flagged in Panama. For that reason, they cannot embark passengers at one U.S. port and disembark them in the same, or another U.S. port without a stop in a foreign country. So, we would have to travel to Ensenada, Mexico and board there.

About 10 AM, we watched the Spirit sail out of San Diego harbor and head for Mexico. Shortly after, a hotel shuttle took us to the San Diego airport where we handed our luggage over to the Carnival porters and made the short motor coach ride to the Port of San Diego. This was our first experience checking in for a cruise at an empty pier. Shortly after check in, we boarded the first coach out and headed for the Mexican border where we hit a short delay. 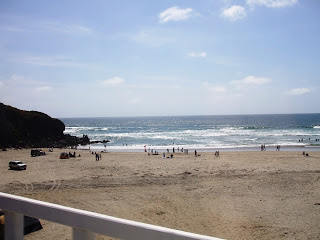 Three Carnival employees were on the bus with us. They would help with the embarkation process in Ensenada and then return to San Diego. Because they would be working in Mexico though, they had to get off the coach at the border and apply for temporary work permits. That held us up for about a half hour. By then two more buses had arrived at the border and, when we left as a group, we had an escort consisting of a Mexican army pickup truck and a Tijuana police motorcycle patrol man. The recent border violence between the drug cartels and the Mexican government called for extra caution. They stayed with us until we were out of Tijuana then left us on our own for the rest of the trip down the beautiful Baja coast.

Boarding the ship in Ensenada was a quick process and soon we had dropped our carry on bags in our cabin and were enjoying a very late lunch on the Lido deck. By 8PM, all the buses had made it down from San Diego and we set sail across the Pacific for the Hawaiian Islands. 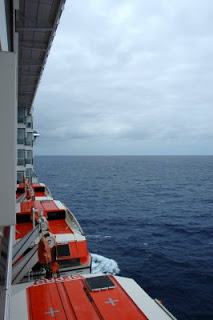 Five days at sea – For five relaxing days at sea we could do as much or as little as we chose. With nothing in sight from horizon to horizon, the ship was our whole world for those five days. The voyage started with seas running twelve to sixteen feet. Georgia and I weren’t bothered but many passengers did suffer from mild sea sickness. By late afternoon of the second day though, the ride became much smoother.

We divided our time between strolls on the open decks, shows and activities in the lounges and just kicking back in our cabin or on our balcony. I really enjoyed the talks by the ships naturalist. He gave a different one every day covering topics of interest to Hawaii’s visitors. The one on volcanoes was especially interesting but I liked them all. 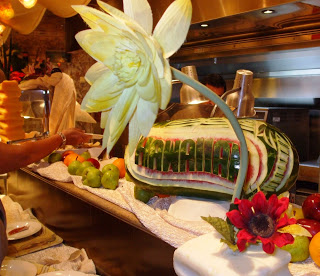 We went to dinner in the main dining room every night and got acquainted with our table mates Paul and Sally. We got along well with them and really enjoyed their company.

We had our first elegant night dinner and captains cocktail party on the second night and the past cruisers party on the third night. There were shows in the main theater every night and deck parties on the Lido on most nights. The highlight was a luau night with roast pork and traditional Hawaiin dishes. 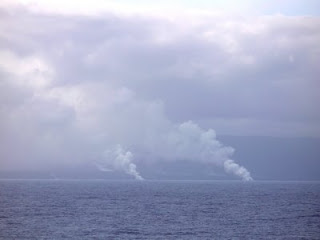 During the afternoon of the fifth day, the shoreline of the big island of Hawaii appeared on the horizon. As the island grew larger in our view, we could see the steam vents where lava from Kilauea was running into the sea. As darkness fell, we made our closest approach to the south shore of the island and could see the orange glow of molten rock through the skylights in the lava tubes. The captain stopped the ship there and turned it completely around so those on both sides could get a look. We turned in that night looking forward to our first port call in Hilo, Hawaii and to a closer look at the volcanoes.