Thanksgiving Trip to the Smoky Mountains 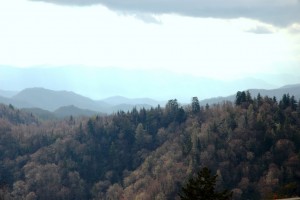 By taking just three vacation days, I could get nine days off of work over Thanksgiving week. With that much possible time, Georgia and I decided we should take a trip. Considering the time of year and the potential for winter weather, south seemed the only reasonable direction for a driving vacation. Georgia’s sister and her husband live in southern Indiana. We decided we would visit them and then continue on to Pigeon Forge, Tennessee.  So, Saturday, November 20th, we hit the highway. Traffic was lighter than we thought it would be and we made it to Greensburg, Indiana an hour earlier than expected. We had a very pleasant visit with Steve and Bonnie Saturday afternoon and evening.

Early Sunday morning we left Greensburg and drove the rest of the way to Pigeon Forge. We checked into our hotel then walked around the adjacent Walden Landing Mall and had dinner at the Smoky Mountain Brewery. The food was good but it was very loud in there since the Tennessee Titans football game was on the TVs and the place was full of fans. After dinner we went back to the room to unwind after the long day 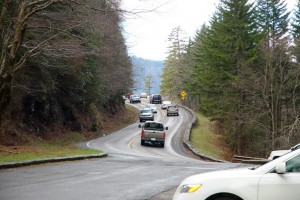 Monday morning the sky was mainly clear and the forecast was for temps near 70. One of the things we wanted to do was to drive through the Great Smoky Mountains National Park to Cherokee, North Carolina. With the fine weather, this seemed like a good day to make the drive. It is only about 42 miles from Pigeon Forge to Cherokee but, we spent the whole day on the round trip. The speed limit on the winding mountain road is 35 MPH with many slower corners and heavy traffic. We also made plenty of photo stops in both directions. The drive through the park if very scenic and should not be missed by anyone visiting the area.

Cherokee itself is home to the Cherokee Indians who remain in the eastern US. The town and surrounding are owned by the tribe and Indian shows, crafts shops and souvenir stores dominate the main road through the town. We had a buffet lunch at the local casino, lost a few dollars to the slot machines, then made the drive back through the park. On the way south, we took the bypass around Gatlinburg, Tennessee. Going back, we drove through the town. Traffic was lighter than it would be during the summer but still slow going along the parkway. It was late evening by the time we got back to the hotel in Pigeon Forge.

Tuesday was the only rainy day of the trip. We drove the eight mile loop around the Great Smoky Arts and Crafts Community of Gatlinburg in the morning. Not all the shops were open on this wet November day but most were. We looked often but bought little.

It was still raining in the afternoon so inside activity seemed called for. We chose the Magic Beyond Belief show since it had very good reviews and they had a matinee performance. While the magic might not be beyond belief – it is pretty much tricks we have all seen before – the act was well executed and the patter was funny. We were well entertained for two hours. 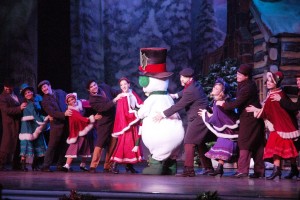 Dollywood is the big attraction in Pigeon Forge and Wednesday was the only day the park was open during our stay. The rain from the day before had been forecast to continue but, although the day started out foggy, it cleared up by mid morning and stayed dry. We got to Dollywood before the 2 PM opening time and made our way through the lines at the gate and into the park. The whole facility was decorated for the holidays and all the venues were doing their Christmas shows. We out started with the Christmas in the Smokies show since one of the park greeters told us it was the one show we shouldn’t miss. 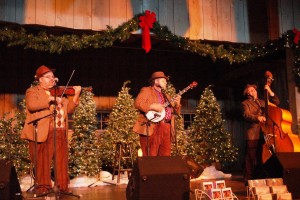 After the show, we walked through the whole park. We visited many of the shops and, like the day before, did a lot of looking but little buying. As darkness fell in the late afternoon, the holiday lights all came on making the buildings and decorations sparkle. This is a special time to visit Dollywood as the whole park looks and sounds different than it does the rest of the year. We closed out the day at the Appalachian Christmas show with the Smoky Mountain String Band then left to return to the hotel.

On Thanksgiving day, we had our dinner at the Dixie Stampede. Like everywhere in town, this was the Christmas show. If you are not familiar with the Dixie Stampede, it is an eat with your fingers dinner theater with seating around an arena full of entertainment. Horse riding stunts and musical productions are the usual fare but the Christmas show adds some special features to those. A living a nativity includes live sheep, goats, donkeys and wise men on camels. Santa closes the show when he arrives in a horse drawn sleigh. It certainly wasn’t the kind of Thanksgiving we are used to but it was a fun afternoon.

We left Pigeon Forge a little later than planned on Friday so we didn’t get back to Greensburg until late afternoon. Still, we had another very nice dinner and visit with Steve and Bonnie that evening.

Saturday we slept in a little and then finished our road trip when we arrived back home in the mid afternoon. Our good luck with the weather (every day, except Friday when we left, the temperature in Pigeon Forge was in the upper 60s to low 70s) made this a fantastic late fall/early winter getaway. We are both glad we decided to take the trip.