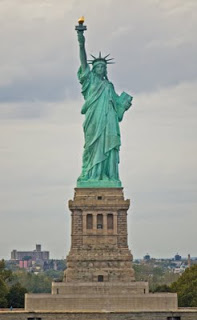 Our day started early. I was up at 3:30 AM and got Georgia up at 4:00 to be ready when our cab arrived at 4:45. Since Georgia broke her foot last December, she has had a problem walking. Detached tendons in her left foot make it very hard for her to balance properly. When we went to Hawaii in the spring, we used a wheelchair to get around on the ship and on shore excursions. After we got back, she bought a light weight mobility scooter to make travel easier. It worked well at Oshkosh and on short trips but this was the first time we took it on a cruise or on an airliner. Georgia had called the airline and made sure the TravelScoot could be gate checked. It would be fine but, we needed to be at the check-in desk two hours before the flight.

We got to O’Hare in plenty of time and, as promised, the scooter was no problem. Georgia rode it to gate before o it was placed in the cargo hold of the MD80. Our flight was right on time and a stiff tailwind even got us to LaGuardia Airport a half hour early. The scooter was waiting for us at the gate when we got off the airplane. Unfortunately, our luck with it ran out there. Despite assurances from the disability people, our cruise planner and the shore excursion people at Carnival Cruise Lines, the staff was using 10 passenger vans for the transfer from the airport to the Carnival Triumph and they told us they couldn’t take the scooter. We ended up waiting at the airport for almost two hours until they finally switched to a full size bus that had room for it and the many waiting cruisers. Still, it was worth the wait has it was a great help to have the scooter on the ship.

Once on ship, we got lunch on the Lido deck then went to out cabin. Our luggage was already there so we got unpacked before the ship sailed. We watched from our starboard side balcony as the ship left the pier and sailed out of New York Harbor. As we passed the Statue of Liberty, we heard faint singing from the forward part of the ship. It grew louder as voices joined in and soon we realized that the passengers out on the upper decks were singing “God Bless America.”

After the statue, we went down to the Paris Dinning Room where we met our new table mates Rodger and Denise. They were excellent company on those nights we all made it to the dinning room. Dinner was very good, as usual. After getting up early and spending a long day traveling, we were ready to relax in our cabin for a while and turn in early. 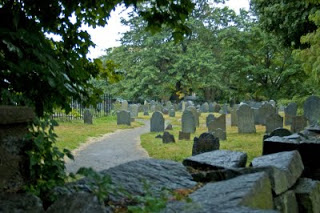 The ship wasn’t due to dock in Boston until 2 PM giving us a chance to sleep in a little on this first full cruise day. When we did wake up, it was to an overcast sky with rain in the forecast. We got breakfast on the Lido deck then attended the cruise director’s port talk. Jorge Salano is the funniest cruise director we have sailed with so far. He had everyone in the crowd laughing at each event he conducted. His previous life as a stand up comic is still serving him well.

After the port talk, we stopped at the shore excursion desk for one last check to be sure the scooter was going to be OK on the excursions. To our surprise, and despite everything we had been told before the cruise, the manager told us that no scooters were allowed on any shore excursion. We would have to take one of the ships wheelchairs. Even when we showed him that Georgia’s scooter took up no more space and weighed about the same as a wheelchair, he refused to even consider it. So, we hurried to guest services and got a chair for our afternoon in Boston and Salem. Carnival needs to get their information straight so that everyone on shore and aboard the ships is on the same page when it comes to access for the disabled..

Georgia and I both have Salem ancestry so, as avid genealogists, we were looking forward to a chance to see the old cemetery and look for family gravestones. Unfortunately, it was starting to rain as we arrived in the town. Georgia and some of the others were smart enough to stay on the bus at the cemetery. I, and a few others, decided to brave the light rain. That light rain quickly turned into a downpour discouraging any idea I had of inspecting the graves. A quick look around and then back to the bud was all we could do. Even that short stop left us soaked to the skin.

Our next stop was the Witch Museum. Salem was so ashamed of what happened during the witch hysteria of 1692 that, for over two centuries, the people of the town did everything they could to forget that part of their history. It was not until 1992, 300 years after the events, that a memorial was dedicated to those who were killed. Today the pendulum has probably swung too far the other way. The town is full of businesses capitalizing on the witch trials. There are some attractions that try be historically accurate though and the Witch Museum’s presentation, while dramatic, is pretty true to history.

On the way back to the ship, our driver and guide gave us a great bus tour of Boston. By the time we boarded the ship we were way to late for dinner so we grabbed a slice of pizza on the Lido deck. 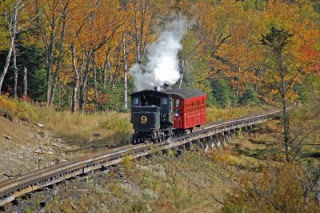 Today’s excursion was the longest of the cruise. Our group was the first off the ship in the morning and the last back on that night. We traveled from Portland, Maine into the state of New Hampshire and to the base of Mount Washington, the highest peak in New England at 6,288 ft. It known for it’s extreme weather, holding the record for the highest wind gust measured at the Earth’s surface, 231 MPH. The mountain is located in the Presidential Range of the White Mountains.

We saw the best fall colors of the whole trip on this tour. We were a week or so too early for peak color but what we saw was still good. The two and a half hour drive to mountain took us through some lovely Maine and New Hampshire countryside. Unlike the day before, the weather was beautiful. A mostly clear sky and temperature about 70.

We arrived at the Mount Washington Cog Railway station about 11:30 AM. The “Cog” was the world’s first mountain climbing cog railway and, as it has for 140 years, still carries passengers to the top of the mountain. Over those years the railway has switched from wood burning steam engines to coal fired steam and, while they still run a couple steam trains, is now making the conversion from steam to bio-diesel engines. The experience of riding up a mountain aboard a train is still the same as it always was though. Before boarding the coach, we were handed a box lunch to eat during the hour plus ride to the top. It is only a two and a half mile trip but the train climbs very slowly. At Jacob’s Ladder, the steepest part of the climb, the train is going up a 37% grade and the front of the passenger coach is twelve feet above the rear.

Once we got to the summit, we had an hour to enjoy the views and explore the mountain top. There is a visitors center with a snack bar and gift shop and the famous Mount Washington Observatory. A viewing platform is on top of the building and provides the best views on the Presidential Range and the sides of Mount Washington itself. The ride back down is a little quicker than the trip up but no less exciting. Here is where the brakeman earns his pay using the hand wheels to brake the coach and keep it on the tracks.

We made it back to the ship just before the sailing time of 6 PM so skipped dinner in the Paris Dining room again in favor of the Lido deck buffet. It was a long day but a wonderful excursion.