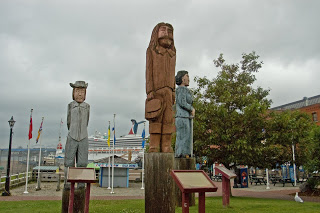 We pulled into the dock at St. John, New Brunswick early on Tuesday morning. The sky was overcast and threatening rain. We didn’t have a shore excursion planned for the day but, while Georgia slept late, I got off the ship for a walk along the waterfront. After seeing the sights and taking a few pictures I made it back to the ship just as the first raindrops were coming down.

We spent most of the day just relaxing on the ship and sightseeing from our balcony. The heavy rain finally stopped in the late afternoon and, with a couple hours left before we sailed, I made one more quick trip ashore to see more of the town. I wish we could have done more in St. John but the weather just wasn’t cooperating with us.

For the first time since the night we sailed, we made it to the dining room for dinner.

Day 5 – Sea Day
Wednesday was a sea day and a welcome chance to just relax and enjoy the ship. It was a full day of doing nothing and liking it. The only notable event was that we saw four dolphins alongside the ship while we having lunch. They made a few jumps, probably to look the ship over and then swam off again.We returned to the dining room for dinner but had the table to ourselves as Rodger and Denise didn’t come down.

Halifax, Nova Scotia was our last port of call for this cruise. Georgia and I spent a week in Nova Scotia on our honeymoon seventeen years ago. We were looking forward to our last shore excursion to Peggy’s Cove.

Our tour bus made the scenic drive along the coast to the small fishing village. Nova Scotia is a beautiful part of Canada and we were surprised at how little this area has changed since we last visited. Peggy’s Cove itself is virtually unchanged. No development is permitted in the village so it looks the same from year to year. Once you see it, you know why it should stay this way for as long as possible. It is the iconic maritime fishing village.

What has changed though is the number of visitors. When we were last here, we had the whole place virtually to ourselves. Now the town gets hundreds, maybe thousands, of visitors every day. The large number of cruise ships visiting Halifax is what has made the difference. There were three other ships in port the day we were there. Despite the crowds, Peggy’s Cove should be part of any visit to Nova Scotia.

We had a couple hours to walk around, take photos, and shop. The weather could not have been better. The blue sky with a few puffy white clouds was a lovely background for photos and the temperature, while only in the 60s, was just right for walking around. We thoroughly enjoyed our time there.

From Peggy’s Cove we rode a few minutes to the Whaleback Restaurant for a lobster lunch.I’m not a big lobster fan but this lunch was good.

Our last stop was at Acadian Maple Products for a talk about how maple syrup is made and a few minutes for more shopping. Then it was back to the ship for the last time.

This was the second elegant night of the cruise (we missed the first one when we were so late back to the ship in Portland) so we dressed up and went down to the dining room. Our table mates were there too so we had a pleasant dinner.

Day 7 – Sea day
Friday was our last sea day and our last full day on the Triumph. We slept in, had a late breakfast then went to the cruise directors debarkation talk. A last trip through the ships shops then lunch in the Paris dining room rounded out our morning.

We spent the afternoon relaxing and packing before, as Denise said, we had our “last supper” in the dining room. We rounded out the evening with final packing, put the luggage outside the cabin and turned in early. We would be in New York about 7 AM the next day. 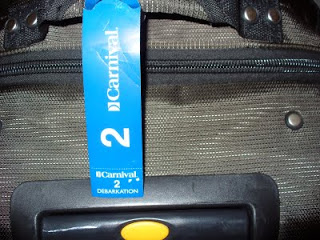 I was up early and watched from the balcony as we sailed into New York Harbor and tied up at Pier 92. I went up on deck to get breakfast then brought a tray down for Georgia. By 8:45 AM we were off the ship, through customs and in the terminal. The only problem was that I could not find our luggage. The bags were all arranged by zone numbers and we were supposed to be in Zone 2. Not only didn’t I find our suitcases in Zone 2, I couldn’t find any luggage with a number 2 tag on it. I looked over the sea of luggage and realized I was going to have to search it all. Almost an hour later, I found the first of our bags – in Zone 23. I found the second in Zone 24 and the last one in Zone 26. All three of them still had the Zone 2 tags clearly visible. Apparently, to these dock workers, any zone with a 2 in it was close enough.

With suitcases finally in hand, we left the terminal and located one of the Carnival provided buses to LaGuardia. We handed the luggage and Georgia’s scooter over to the bus driver and got on. After a short wait for the bus to fill up, we were on our way and soon at the airline terminal. Again, there was no problem with gate checking the scooter. Except for the shore excursions, the TravelScoot worked out very well for Georgia. We will certainly take it on other trips.

We had another shorter than scheduled flight and arrived early in Chicago. We called a cab and were home before 5 PM. Another wonderful cruise behind us and we are already planning the next one.