​Litchi is an app for DJI drones that ​can be very useful for automating flight paths. Often touted as a replacement for the DJI GO 4 app, I prefer to think of it as a supplement to that software. Both apps are good and both will have ​their place in my flying.

While the Litchi app can be used for manual flying, it's real strength is in the automation. It's several flight modes are able to command the drone without input from the operator - even if the connection to the remote is lost.

This post is just an ​overview the Litchi app. I will be posting more in depth looks at the various feature and how they work in the future.

​You can choose from six flight modes in Litchi as shown in the image below. ​Most modes have several variations and many options so there are an almost unlimited number of ways to get the results you want from each flight.

Credit goes to the Litchi help page for the descriptions below. I have taken the liberty to edit some of them for brevity. 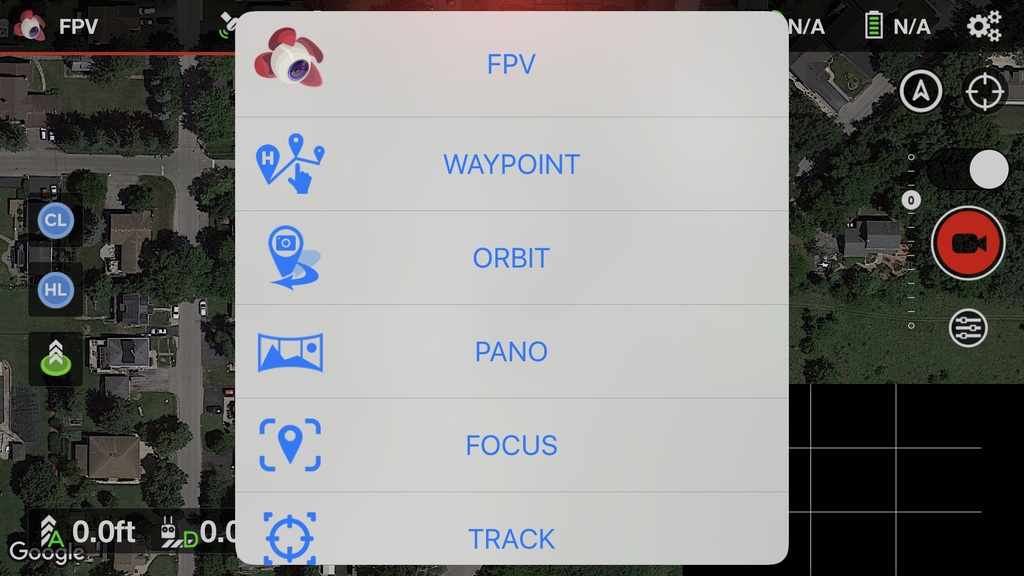 ​FPV mode is the default flight mode and allows manual flight of the UAV. When you enter this mode there are several options available.

​Litchi's Waypoint mode allows you to setup waypoint missions as well pre-program advanced camera moves such as ​video tours and Cable Cams. Waypoints were the reason I first wanted to try Litchi.

​​Place multiple waypoints on ​the map ​view and the ​drone will fly from waypoint to waypoint and complete the mission even if the remote signal is lost.

Waypoint missions can be planned without the drone connected. That saves battery and allows you to plan the flight before you even leave home! The Litchi website Mission Hub also let's you plan missions on your desktop or laptop.

​The overall mission and each waypoint can have many options set to get exactly the results you want from the flight.

This flight mode deserves a post of it's own. There are just too many options to go into them all in this​ short introduction to Litchi. 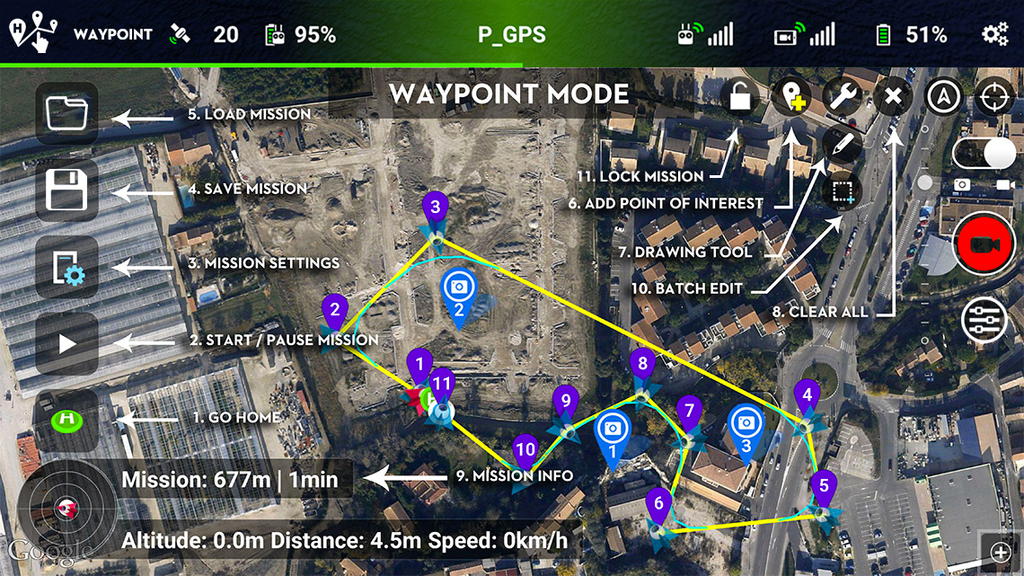 ​The orbit mode will fly the drone in a circle around a point of interest. The radius, altitude, speed and gimbal view are user ​configurable and can be changed during flight by using the joysticks and gimbal control.

Because the pilot has so much control during flight, this is a very flexible flight mode. I will certainly do a full post about orbit.

Here are the settings and options:

​Panorama mode has options for auto or ​user defined panoramic photos. They can be shot horizontally, vertically or spherical.

User defined panoramas allow the operator to set every aspect of the shot including width in degrees, height, linear or spherical, nadirs (bottom shots), columns, rows and more.

The ​panoramas can be stitched in the app after the flight ends so aircraft battery isn't used while stitching.

​Focus mode allows you to easily keep a ​point of interest or the mobile device in the video frame while flying the aircraft manually.

The aircraft rotation (yaw) and gimbal pitch angle are controlled by Litchi while the pilot controls speed, direction and altitude.​

Focus can be a very powerful tool for getting great video and photos. It is a mode I will be experimenting with for sure. 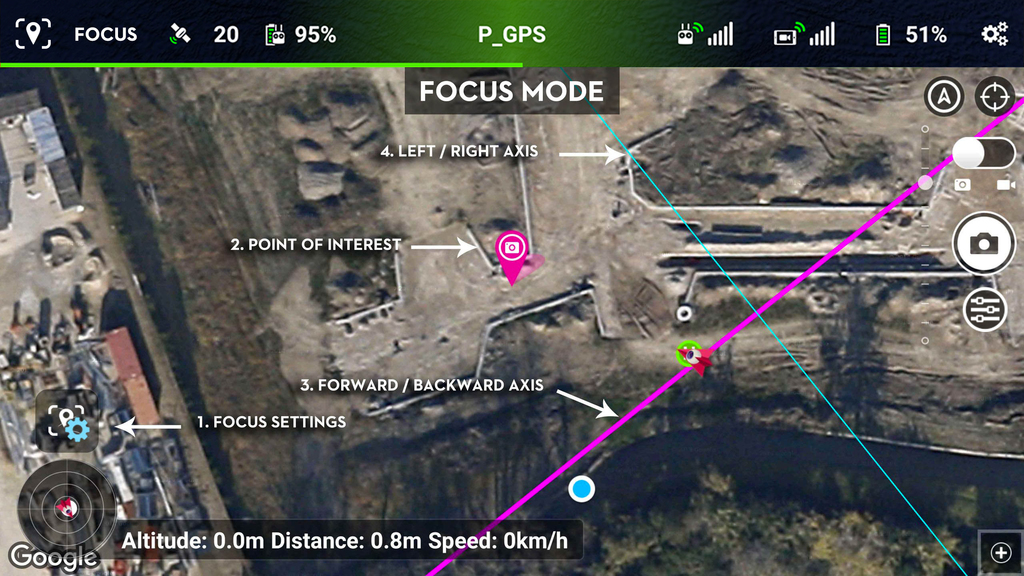 ​In Track mode, Litchi uses state of the art computer vision algorithms to track a selected object and keep it in the frame. You have the choice to either fly the aircraft manually while Litchi keeps the object in the frame, use the Orbit feature to instruct the aircraft to orbit around the tracked object as it moves, or start follow where the drone will autonomously follow the tracked object.  ​

​There is a seventh mode called follow which is only available on Android devices. I use an iPhone so this mode is not available to me. I do have a couple old Android phones laying around so I might try using one later.

​I addition to the flight modes, there are a few other features of Litchi that make it desirable for controlling DJI drones.

​Auto Flight Logging: Litchi automatically save flight data to a log on the mobile device and can optionally automatically sync flight logs to AirData.

Screen Recording: The Litchi app can record the mobile device screen with or without audio.

Auto Record: Can be set to start recording when the aircraft starts and end when it lands and shuts down.

These are just a few of many options that can be controlled through settings in the app.

I encourage you to take a look at the Litchi App and see if it will help you get more out of your DJI drone.  Just be aware that Litch is not free. Right now it sells for $22.95 in the App Store. For me it seem well worth the cost but you will have to decide that  for yourself.

​Your comments are always welcome. Let me know what you think about Litchi.

Great app. Note that some features are different on the iOS vs Android versions. E.g. the quality setting on Track Mode is only on the iOS version. 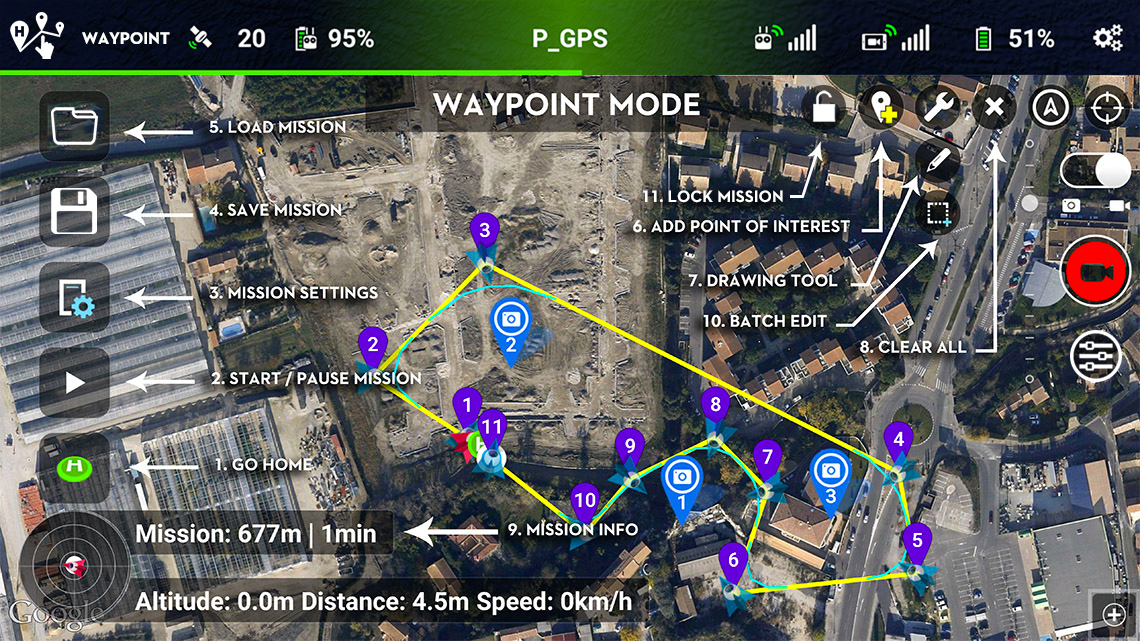