Lesson 70 – Back to Janesville 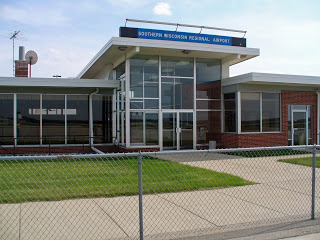 I finally got a day when the weather was good enough for a solo cross country so, I went back to Janesville, Wisconsin. When I went there for my first solo cross country, I had trouble finding the airport. This time I hoped to do better.

The most difficult part of the whole flight was dealing with FSS while on the ground. From what I have seen so far, the consolidation is not a good thing for pilots. When I called 1-800-wxbrief, I got the new voice prompt system. I asked for a briefer, gave my state as Illinois and then waited on hold for over 10 minutes. When I was finally connected, it was to Nashville AFSS. I asked for a standard briefing for the flight from Waukegan to Janesville and return. The briefer went away for a while then came back on to ask me if Janesville is in Illinois. I told her it is in Wisconsin and the designator is JVL. That helped her find it and I got my briefing. She gave me the winds aloft from Muskegon, Michigan so I had to ask for the ones from Joliet, Illinois. Over all, I was disappointed in the service. Up to now, the briefings I have gotten from Kankakee AFSS have been great. They know the airports and offer local knowledge about things like parachuting and aerobatic activity that might affect my route but that weren’t yet in the notams. Not having access to those briefers who know an area very well is going to be a great loss for pilots and, possibly, a safety issue too.

Once at the airport, I went over my plan with Sandy and got the log book endorsement for the trip. Everyone at Skill was complaining about flight service and they had posted the direct number for Kankakee over the phone. I called that number to file my flight planes but still had to wait several minutes to be connected. Janesville was part of the Green Bay AFSS area of responsibility but, Green Bay is now closed. After filing the flight plan from UGN to JVL, I asked who I should close it with when I got to Janesville. I was told to call the wxbrief number and close it with whoever answered. I should make my radio call to open the flight plan for the return flight as always. He wasn’t sure who would answer but, someone would.

I did my preflight and got airborne at 3:30. Once outside the class D airspace, I called Kankakee radio to open my flight plan. Talking to flight service on the radio seems, so far, pretty much the same as always.

I only had three check points selected for this short trip and they came up right on schedule. Before I knew it, I was on the radio with Janesville tower. I saw the airport right after I called which was much better than the last time. I entered the base for runway 22 and made a very nice landing.

As I expected, the terminal was closed. I parked and used my cell phone to call flight service to close the flight plan. Again, I had to hold for 10 minutes before I was connected. I used the time to take a couple photos of the terminal and of N35092 on the ramp. With the flight plan closed, I did an abbreviated preflight and got back in the airplane for the return trip. The takeoff, cruise flight and landing back at UGN were totally uneventful. When I called to open the flight plan I addressed it to Green Bay radio and whoever answered didn’t correct me. I’m not sure who I should be addressing but, I will have to find out.

With this trip done, I am back to planning for the long cross country. Weather permitting, I will get it done soon.