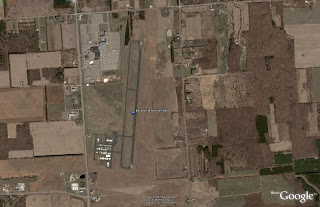 Well I finally got the long solo cross country done. If you have been reading this blog, you know I was working on it way back in January. I was beginning to think it would never happen. I had to cancel Tuesday because a line of thunderstorms was moving though the area. When I got up yesterday, the sky was obscured by a low overcast but, the forecast looked good. Sandy was not working yesterday so, one of the schools owners would supervise my solo.

When I met with Skip at 8 AM, the clouds were starting to break up but the wind was over the limits in my solo endorsement. The ATIS was reporting 16 knots gusting to 22 knots. The TAFs were calling for lower winds so, Skip signed me off for the trip. I called flight service to file three flight plans, one for each leg of the trip, then started my preflight.

The airplane was in the hanger so, it hadn’t been fueled the night before. There was plenty of gas left for my trip but, Skip suggested I top off the tanks at the first stop. I haven’t had to buy fuel yet so he thought it would be good experience for me.

I got airborne about 9:45 AM for my first leg, which was to Oshkosh. Wittman Regional Airport is one of the meccas of aviation and seemed an appropriate destination for a student solo cross country. I flew northwest to the Burbun VOR then turned north for OSH. Visibility was very good and I had no trouble seeing my check points. The wind was stronger than I planed for though so my ground speed was lower than expected. I originally planned to fly this leg at 6500 feet but, the winds up there were from 360 at 28 knots and, there were scattered clouds at 5000 feet. Rather than dodge the clouds and fight the head wind, I changed my plan to fly at 4500. The winds at 3000 were reported as 010 at 11 knots. I used 19 knots as my interpolated number but, I suspect the actual winds were much closer to the 28 knots than the 11. I landed on runway 36 at Oshkosh about 10 minutes later than expected.

The taxi from the turnoff on taxiway A2 to the FBO was a very long one. To top it off, I had to hold short of the crossing runway 9-27 for several minutes. By the time I parked, I was already at least 25 minutes behind schedule. When I went into the FBO to order fuel, I found out the truck was across the field so I would have to wait a little longer. I called Skip to let him know I was running late. He said that the schedule was clear until 3 PM so it was not a problem.
Next, I called flight service to close my flight plan. I reported on some of the problems that I have been having with them in my last post. Those problems haven’t gotten any better and, might be worse. I had a long wait on hold but was finally connected. I told the briefer I wanted to close my flight plan from UGN to OSH and I wanted to add 45 minutes to my takeoff times for the next two legs. He started to say he was doing that but, then he told me his computer screen suddenly went blank. He would write down the information and enter it as soon as he could get back on. I should have known that was going to be a problem.

I paid for my fuel, did an abbreviated preflight and called ground to taxi for departure to the southwest toward my next stop at Baraboo/Wisconsin Dells. I took off from runway 9, which was a much shorter taxi than 36, and was soon on course. The Oshkosh VORTAC was out of service so, I could not call Green Bay radio on that frequency. Once out of the Oshkosh class D airspace, I radioed them on the Dells VOR to open my flight plan for this leg. Nothing was said about any problem with my flight plan.

I stayed at 4500 feet for this leg and flew direct, which took me under the Volk East MOA. I knew the MOA was hot because I had asked when I opened my flight plan. The floor is at 8000 feet so I was well underneath but, I made an extra effort to keep my traffic scan up anyway. I matched a bend in a river and a highway curve to what was on the sectional and found the airport easily. I was coming in on the wrong side for the left pattern to runway 1 so overflew the field to the west and entered the pattern from that side.

I thought about just taxing back to get in the air again and make up some time but, I was on track to get home well before 3 PM so I parked and went inside the FBO for a few minutes. Again, I called flight service and was on hold for a few minutes. This time I was connected to Princeton AFSS and, again, nothing was said about any problem with my flight plan.

I bought a bottle of water then got back in and took off for home. While I was still on the UNICOM frequency, I got a call from the FBO. Flight service had called them to find out if I was there. They said that I had three flight plans open and I hadn’t closed any of them. I switched over to the FSS frequency and called them. I explained that I had called to cancel at each stop and the briefer promised he would straighten out the misunderstanding.

For this leg, I called Madison approach for VFR flight following. This was another first for me but was easy. I got my squawk code and was handed off when I crossed from west to east of the airport. Things were pretty slow so I only got one traffic advisory before I left the controllers area and radar service was terminated.

By now I was back in familiar territory and just followed my usual landmarks back to UGN. I parked on the ramp right at 2 PM and called Kankakee radio on the RCO to close my last flight plan. The briefer said he hadn’t heard about any problems with my plan so, the guy I talked to at the Dells must have kept his promise to straighten it out.