Lesson 45 – Review and Some Trickery 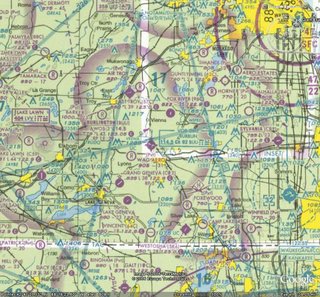 After fighting a cold for several days, I’m finally starting to feel better. I got in a long flying lesson yesterday. Even though I wasn’t feeling 100%, it went OK. This, and the next lesson, are supposed to be a review of everything I have learned so far in preparation for the Stage 3 check. We started out with basic maneuvers including slow flight, steep turns and stalls. I was a little rusty but did them within PTS standards. I want to get that to about half the limits before my check ride.

Sandy really piled on the distractions and simulated emergencies. She pulled the power after take off on runway 23 and asked where I was going to go. Not much choice about that, go for the open fields just to our right but watch for the power lines.

She did set up one trap that I walked right into. We were doing the maneuvers just north of Galt. After I did a power on stall, she told me to sit back and relax while she did one. She did a couple clearing turns and entered the stall heading north. When she was done, she gave the controls back to me and asked me if I could see Burlington. I looked north west where I thought it should be and saw an airport so I headed for it. She kept asking me questions about how I was going to set up for the right pattern to 29, when I would start descending, etc. I just kept flying along concentrating on getting positioned to enter the pattern until I was a couple miles out when I finally said things didn’t look right to me. The heading weren’t right and the runway wasn’t where I thought it should be. Finally, she asked if we could possibly be at the wrong airport and the light went on. This was East Troy – not Burlington. Sandy had flown us past Burlington while she was doing that stall demonstration and I fell for the trick. It was a very good lesson in positional awareness and I wont forget it any time soon.

I got us to the real Burlington and set up on the downwind where Sandy pulled the power abeam the numbers. This simulated emergency went very well and I landed without any need to touch the power.

We stayed in the pattern for a couple more crosswind landings and more tricks. Sandy left her window open as I was getting positioned for the first takeoff and I would have missed that if she hadn’t asked me what else I needed to check. She repeated that on the next takeoff but I didn’t fall for it twice.

By the time we headed back to Waukegan, I was watching for every little thing out of the ordinary. I got the ATIS then tuned to the tower about 20 miles out. We didn’t hear anything on the frequency for several minutes so I started to look for more trickery. The audio panel was on the right radio, I checked the volume but that was OK. I even pulled out my chart to make sure I really did have the right frequency. Finally, we heard another aircraft call in. Sandy hadn’t done anything, it was just not very busy back at home. She told me later that she had wondered what was going on too.

The wind was right down the runway for 23 so, of course, Sandy asked the tower if we could have 14. The controller gave us a long straight in approach. I still have a little problem judging when and how fast to descend when I’m going straight in but it all came out right this time.

It was a 2.3 hour flight and I was worn out by the time it was over. I learned some valuable lesson and I am going to be very suspicious of my CFI from now on!