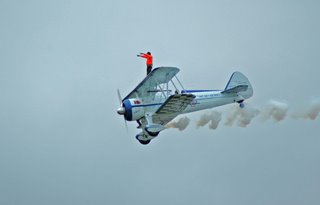 It’s been a while since I made an entry and I have some catching up to do. I haven’t flown in a couple weeks but, things have been going on.

I went to the air show at the Waukegan Airport on September 9. The weather was not ideal but the show did go on. The overcast kept the performers down low making for some great photo opportunities.

The bad weather continued for the next week so I ended up with two ground school sessions. Then I got sick and had to cancel two more lessons. I was finally feeling better last Sunday and was scheduled for my Stage 3 checkride. Again, the weather didn’t cooperate so we did the oral portion and put the flight on hold.

During the down time, I have been hitting the books in preparation for my written exam (what the FAA calls the knowledge test). Yesterday was the day and I went into the test feeling confident that I would do well. The hardest thing, for me, was slowing down so I didn’t make stupid mistakes. I got through the 60 questions in about 20 minutes then forced myself to go back over them a second time, slowly, and redo all the calculations. I only changed one answer and that was because I just hadn’t taken the time to read all the possible answers the first time around. I corrected that one then submitted the exam for scoring.

Now the suspense began, the proctor who was administering the test ran into a problem logging into the system to get the results. It took a couple calls to LaserGrade and a half hour on the phone to get the issue resolved. In the mean time, I was waiting to see how I had done. Finally, the score came through and it was just what I had hoped for, 100%. I took the test right at Skill Aviation so I got plenty of congratulated from everyone who was in the office at the time.

With the written done, it is time to concentrate on finishing up the flying part of the training. Sunday, we will try again to get the Stage 3 checkride done and then I’ll be ready to move onto Stage 4 which is the solo cross country and checkride preparation stage.