After my last lesson, Sandy and I talked about the schedule for July. I will be going on an Alaskan cruise at the end of the month so I wanted to schedule my usual twice a week lessons up until then. Sandy said we would get my first solo done before I leave so we can concentrate on the dual cross country stage after my trip. With three weeks to go, rain coming down and a chance of thunderstorms in the forecast, I was expecting to stay in the pattern for more takeoffs and landings on Sunday – if we could fly at all. So, when Sandy called my cell phone just as I was getting in the car to leave for the airport, my first thought was that she was calling to cancel the lesson. How wrong I was! In fact, she was calling to tell me that we would try to get my solo done and to invite my wife to go to the airport with me so that she could be there for the big event. It was nice of her to invite Georgia but, now I had the whole drive up there to stew about soloing. 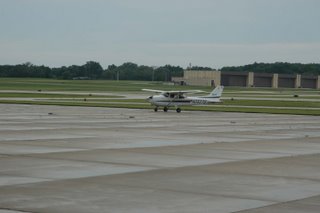 The first thing I notice when we get to the school is that there are more cars in the parking lot than usual. Just about every instructor is working on this Sunday. Most of the airplanes are out on instructional or discovery flights. N35079, my ride for the day, sits alone on the rain soaked ramp.

We go into the conference room where Sandy quizzes me about solo privileges, endorsement requirements and that sort of thing. She takes my student pilot certificate and logbook and endorses them for solo flight in a C172R. As she hands them back, she assures me that there is no pressure to do the solo today. Sure there isn’t. She has invited my wife to watch, told all the instructors that this was the day and signed off my endorsements. No pressure to get it done at all!?!

By the time I finish the preflight, I am starting to feel confident that I really can fly this airplane by myself. Sandy comes out and we taxi to runway 23 to try a few landings with her on board. We do four takeoffs and full stop landings. Each time, from when the controller clears us for takeoff until we are clear of the runway after the landing, I get nothing but silence from the right seat. I know that she is judging how I am doing without any help from her. I am also aware that, as we are making our trips around the pattern, other airplanes from the school are returning from their flights. 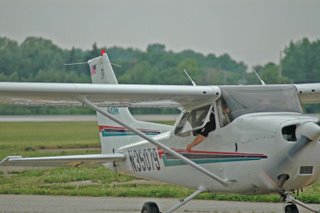 After the fourth landing, she tells the tower we are headed back to the ramp. We pull into a corner of the, now almost full, tie down area. Sandy asks me if I am ready and I know that I am. She calls the ground controller to advise him she is getting out and that her student will be taxing back to 23 for his first solo. She tells me to give her three good landings, opens the door and gets out. She puts her head back in long enough to say “have fun” and then the door closes and I am on my own.

As I taxi back to 23, I realize that I am not nervous at all. I am just going to go do three more of exactly the same thing that I have already been doing. The rain has stopped by now and, passing Skill Aviation, I notice that a small crowd is gathering out in front of the office. Besides Georgia and Sandy, I can see Kim, who I have flown with twice, and a couple other onlookers. I want to make these landings look good for them. 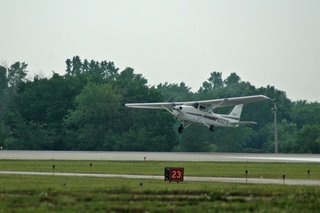 I get to the hold line, do my pre-takeoff checks and use the magic words “student pilot” for the first time. “Waukegan tower, Cessna 35079 – student pilot, ready for take off on 23.” He clears me to go, I taxi to the centerline, add full power and am soon in the air. No turning back now! I am going to be making at least one landing. The climbout is definitely quicker with just me in the plane. I make my crosswind turn right at the end of the 6000 foot runway and am at pattern altitude well before turning downwind. I have to use a little less power than usual to keep from climbing on the downwind leg. Power reduction and first flaps abeam the number. Base turn. Airspeed and altitude looking good so add the second notch of flaps. I don’t want to overshoot final so I end up starting my turn a little too early. No problem. Make it shallow and intercept the extended centerline. I’m a little high as I roll out so I put in the last notch of flaps and take out some more power. Over the threshold I take out the rest of the power and ease back on the yoke to start the flare. I don’t want to balloon so I try not to pull back too fast. The landing is just a little flat but on the mains and almost on centerline. Mission accomplished! I have successfully taken an airplane into the air and brought it safely back to earth – all by myself. 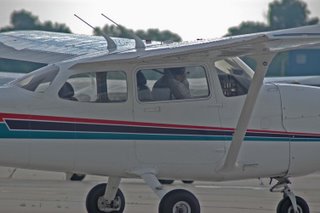 I roll clear of the runway, clean up the airplane and taxi back. The group in front of Skill is now waving and cheering. I find that I really am having fun and I am ready for more. On the second landing I do balloon just a little so I add a touch of power and settle softly to the runway. I can almost hear Sandy’s voice saying “nice correction.” Last time around. This time I am exactly centered on the runway and touch down gently with no balloon. It is the best landing of the three and a good one to end on. I taxi back to the ramp and pull 079 into a parking spot.

As soon as I shut down and open the door, the congratulations start. After the obligatory photos in front of the airplane, we walk inside where I get a round of applause from the other instructors gathered inside by the picture windows. The radio is tuned to the tower so I know they were listening. Sandy asks for my logbook and makes the entry – 1.2 total hours, .7 dual, .5 pilot in command, “First Solo – Great Job” in the comments.

People asked me how it felt to be alone in the airplane. To be honest, once that passenger door closed, the rest of the flight was pretty routine. I have read many other accounts of students first solos and, that seems to be the most common reaction. It is a tribute to the excellent training we get from our CFIs. They know when we are ready to go it alone even if we have our own doubts. When the time comes, the training kicks in and the solo flight is no problem at all. It is only after it is over that we realize that we have accomplished something that only a very small percentage of people will ever do.