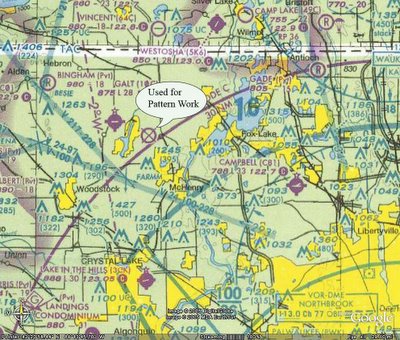 Yesterday was about 40 degrees warmer than Wednesday was. It was a much nicer day to be outside but, again, the visibility wasn’t great. It would be nice to have a horizon to reference one of these days. Still, we did get to fly so it was a good day.

The checklist is getting easier. Tim makes it a point to explain why we do the items on the list rather than just doing them because they’re written down. Taxiing felt better today but, I still kept my hands off the yoke. Next step is to be able to hold the yoke but not try to steer with it. I was also able stay more or less straight while braking this time.

Takeoff went well except that I don’t feel like I’m doing a very good job of holding the runway centerline after liftoff. I also found I was chasing the airspeed needle a little. I have to work on the sight picture and holding attitude by outside reference. I’m sure that will come with more practice so I’m not really worried about it.

We covered a lot in this lesson. The plan was to head over to Galt Airport (10C) where Tim would demo the landing sequence. On the way there, I practiced turns in both directions while Tim pointed out landmarks in the area. I finished the turns with a steep one in each direction. On the first one, I didn’t get the back pressure out soon enough on the roll out so we zoomed up a couple hundred feet and got a little slow. I did better on the second rollout but lost altitude during the turn.

Tim did the landing at Galt then I taxied back and took off. On the way back to Campbell, we did more pilotage training. We flew over an unused private field and decided to use it for some rectangular pattern practice. I flew around and around the field trying to stay a constant distance from the runway. It was a good introduction to ground reference maneuvers. I also learned how to change fuel tanks. Electric fuel pump on, switch tanks and make sure to feel the detent, check the fuel pressure and listen for a smooth engine, turn the fuel pump off while again watching the fuel pressure and listening to the engine.

By now we were almost home. Tim spotted the airport first and I saw it soon after. I was too close to the runway on downwind so the base and final were just one continuous turn – and I still overshot a little. I had just about gotten us lined back up when the wind pushed me sideways. Tim did a good job getting us straightened out and on the runway without a go around. We even made the turnoff to the ramp. Another 1.3 hours in the log book.

It was a good lesson and I learned a lot. I have to work more on multitasking. If I get the bank angle steady and roll out on heading, I probably let the altitude vary. If I concentrate on the altitude, I miss the heading. Also, I haven’t got a good feel for trim yet. Either I forget to trim or I fiddle with it too much. I don’t think any of these are major problems for me though. I just need to keep practicing so it gets more natural.

No lesson next week but, I am scheduled for January 2.