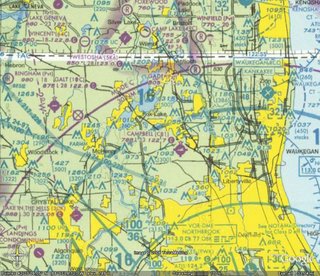 Yesterday’s lesson was all about pattern entry and exit. We spent about an hour in the classroom going over the procedures for getting into and out of controlled and uncontrolled fields. When the white board was filled with sketches and we had inspected the sectional and the A/FD, Sandy made one final point. What we had just gone over were the best practices for pattern work. When actually in the air, be alert and ready for anything to happen because it will. With that in mind, we were ready to go fly.

We took off on runway 23 and flew the few minutes it takes to get to Galt Airport, where we would work on patterns at an uncontrolled field. We did the standard 45 degree entry to the left downwind for runway 27. As I was making the turn to base, another pilot came on the air and suggested we check the wind sock since winds were now favoring runway 9. We went ahead and made a low pass over the centerline for 27 and, sure enough, the wind sock showed a very light wind was coming from the east. First lesson in expecting the unexpected, the wind can change quickly – it’s only about 10 minutes from Waukegan to Galt. We maneuvered to the north and re-entered the pattern for runway 9 behind the aircraft that had advised us of the wind change. We did another low pass and then went around again.

This time Sandy asked if I wanted to try landing. The runways over at KUGN are huge so I haven’t landed on a real narrow one since those first lessons I had at Campbell. Galt’s runeway is 36 feet wide, about the wingspan of a C172. I was willing to give it a try though. The approach was good and I leveled off at the right height without ballooning. The touchdown was “firm” but certainly not as hard as others I have done. Sandy asked how I thought I had done. I told her it was a little hard but not too bad. Then she asked how I thought it went considering that she hadn’t touched the controls at all. Well, in that case, it was a pretty good landing!

As we taxied back to depart, an inbound aircraft called to ask which runway was in use. Sandy told him we were using 9. Just as we were getting ready to depart, he called again to report he was entering on the crosswind for runway 27. Lesson two in expecting the unexpected – other pilots will fly non-standard entries for runways other than the one you are using. Sandy got back on and again advised that we were planning to depart runway 9. I don’t know if the other pilot couldn’t hear us or if he just didn’t care but, he never gave any indication that he even knew we were there and kept reporting positions in the pattern for 27. On final, he called a touch and go but didn’t say whether he was staying in the pattern or departing. We decided we had done all we came to do so we took off and headed for home,.

Back at Waukegan, I got a lesson in the importance of being flexible at controlled fields too. Runway 5 was now in use so the controller told us to report a 4 mile base for that runway. Just as I was about to make the call at 4 miles, he came back on and told us to change that to a 3 mile final so he could bring another aircraft in ahead of us. I turned away from the field to get 3 miles of distance before turning final. Neither of us could see the traffic so, I called twice for updates on his position. Finally, we were told he was over the numbers and no longer a factor. I got lined up with the runway, but I never really got a good handle on my speed so I came in high. It’s a very long runway and we got down OK. If the landing at Galt was “firm”, this one was definitely “hard”.

This turned out to be a great lesson. I learned about flying correct pattern entries but also got a real world introduction to staying flexible and expecting changes. I hope I learned the lesson well and that I never get so complacent that I don’t react to the changing airport environment.