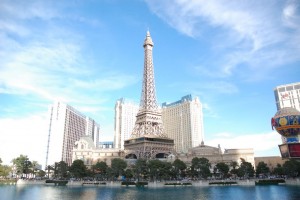 Georgia and I flew to Las Vegas last Friday afternoon. The main purpose of the trip was to attend our niece’s wedding but we also made a mini vacation out of the it.

The trip from Chicago was one problem after another. It started when Georgia’s mobility scooter set off alarms with the TSA. Apparently, when the agent swabbed it for explosives it came up positive. That attracted a half dozen other agents who stood in a circle and tried to figure out what to do about this “dangerous” device. Two of them went into a small office and came out with loose leaf binders that they paged through for several minutes. Finally a supervisor arrived and, after more discussion, he decided that one of the new enhanced pat downs was in order. He called a female agent over to pat Georgia down then gave the scooter a pat down too. He ran his hands over the frame and handle bars, turned the wheels and squeezed the seat cushion and backrest. After the inspection, the supervisor decided that the alarm was probably triggered by one of the medications Georgia takes and sent us on our way.

If we thought we were home free now, we were about to find out otherwise. We got to the gate and checked in with the agent there. He told us that Georgia should drive the scooter down the jet way  and then I should bring it back up so it could be loaded on the plane. When I got back to the gate though, the agent told me there might be a problem with the batteries. The DOT has released new rules for transporting lithium ion batteries and it seems to be causing a lot of confusion. I was shown a printout that said the battery must be less than 1600 watt hours. I assured him that ours are well under that but, he wanted something in writing. I have never seen a battery with the watt hour rating printed on it so I wasn’t sure how I could convince him. He consulted with the captain of the aircraft and the crew chief but no one seemed to want to make the decision to allow the batteries on board. An airline supervisor arrived and she asked me what documents I had that she could look at. All I could show her was the owners manual which also didn’t give the the battery rating in watt hours but did say they are 24 volts and 10 amp hours. By now, all the other passengers were on board the airplane and we were holding up departure. Finally, the supervisor called someone in maintenance and gave them the scooter makers phone number. Two minutes later her phone rang back and she told me I was cleared to take the batteries on board.

When I got on, Georgia was in something of panic. Apparently the announcement that the doors were closing had been made a few minutes before and she thought I was being left behind. She had no idea about what had been going on since she got to her seat. She had asked one of the flight attendants who assured her they wouldn’t leave me but she had still been scared. Now that I was in my seat, she could at last relax. We had flown with this scooter several times before with out a problem so it was disappointing to have so much trouble this time.

We arrived at McCarran International Airport a few minutes early and the scooter was waiting for us at the aircraft door. I put the batteries back on it and we headed off to baggage claim. One suitcase came around on the carousel but our second checked bag didn’t show up. When only we and one other couple were left waiting, we accepted that the bag had been lost and I went to the claim desk. I gave then lady my claim tag and she took all the information. She told me another flight from Chicago would arrive in an hour and  that there was a 98% chance our bag would be on it. Of course, this was the important luggage. It held my suit and Georgia’s dresses that we would need for the wedding the next day. We, and the other couple who were missing two bags, decided to wait for the next flight to arrive.

As you might guess, our bags did not show up on the next flight. Another flight wouldn’t be in for several more hours so we went on to the hotel after being assured our missing luggage would be delivered. We did get it about 9 PM – strangely enough, that was just before the next Chicago flight was due to arrive. Apparently it had been at McCarran all the time but who knows where. As it turned out, this was the last of our problems and the rest of the trip was a joy.

We stayed at the Mandalay Bay Resort which was very nice. Most of the other wedding quests were also staying there so it was convenient to meet up with everyone. We spent some time Friday night talking with family but everyone was tired from traveling so we split up fairly early to rest up for the big wedding day on Saturday.

The next morning we had breakfast at the hotel buffet then got together with Georgia’s sisters and their families. We also met the grooms parents and enjoyed their company very much. Before we knew it it was time to get dressed and get over to the wedding chapel. We shared a cab with Georgia’s sister Bonnie and Bonnie’s husband Steve who readers of this blog met in the Smokey Mountain post. 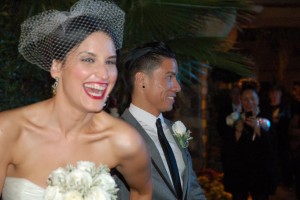 The wedding was very nice. Unlike some Vegas weddings, there was no Elvis impersonator or hokey setting. It was a dignified but happy ceremony at the Viva Las Vegas Wedding Chapel that, I’m sure, will be a wonderful memory for Kristina and R.J.

You can see more wedding photos at  http://picasaweb.google.com/tclough1/KristinaRJWedding#.

After the wedding, we all returned to Mandalay Bay for a reception dinner and celebration at the House of Blues.