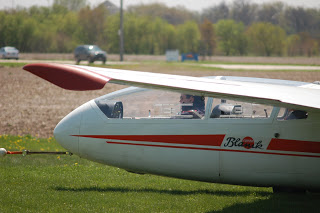 In the last post, I said that I had submitted my application for membership to an area soaring club. A couple days later, I was notified that I had been accepted as a member of the Sky Soaring Glider Club. This past weekend was my first chance to exercise my membership privileges by flying one of the club sailplanes.

Friday evening brought a fresh round of thunderstorms to the area so Georgia and I didn’t leave for the campground until Saturday morning. That day was cold, rainy and windy with no flying going on at the glider port. Sunday was the only flyable day of the weekend and many club members took advantage. With so many pilots waiting to fly, I was only able to get one training flight in for the day. It was a good one though.

Georgia went with me to the field where we arrived a little after 10AM. I put my name on the flight list and settled in to wait my turn. Another student was ahead of me on the list so her instructor took both of us through the pre-flight of a Schweizer 2-33 2 place glider. It was pretty straight forward with only a few differences from preflighting power planes. As it turned out, this isn’t the sailplane I would fly later but a good introduction none the less. I also got some instruction on hooking up tow ropes and running the wing while I was waiting.

With me being deluged with new information, Georgia was kind of left sitting by herself. So, when someone was needed to “work the board” she volunteered. The job consisted of keeping track of all the flights by logging the aircraft N number, pilots name, tow pilot name, instructors name if one was required, tow height, time off, and landing time. It was a pretty challenging job for someone who was not only new to the club but to soaring in general. She did a great job though. By asking questions of anyone close by, she got every flight logged with the correct names and times.

Finally, my name came up on the list. I had been waiting for the 2-33 to become available expecting to get my lesson in that one. So far, it was being used for student flight while the Blanik L23, another 2 place ship, was being used for annual checkout flights. Every club member needs an yearly checkout and, with the season just getting started, a lot of people were trying to get theirs done. I was sort of surprised then when one of the CFIs led me over to the L23. It is a higher performance sailplane than the 2-33 so I wasn’t disappointed.

I climbed in the front cockpit and got some help with the straps. Then I was given a quick overview of the controls which consist of a stick, rudder pedals, spoiler handle, trim lever and brake handle. There is also a manual gear handle but, the gear on this one is inoperative right now and is locked down. The tow rope was attached, we closed the canopies and did the brief before takeoff checklist. I gave a thumbs up to the wing runner, waggled the rudder and we started down the runway behind the tow plane.

The CFI did this first takeoff with me following through lightly on the controls. Once away from the traffic pattern, I got a chance to try flying on tow. I learned that it takes a very light touch on the controls to stay in the right place behind the tow plane. I got us too far out of position a couple times and the instructor had to come on the controls to help get us back. Still, I didn’t do too bad for the first attempt. At 3000 feet AGL, we cleared left and right, I pulled the release handle and we were soaring.

We started out with the basics. I did some straight and level flight to get an idea of the sight picture. Then I did shallow and medium banked turns. My instructor was pointing out landmarks on the ground to help me get oriented to the training area and the field location. We wont be getting out of gliding distance from the landing strip during these training flights and I will have to know exactly where I am at all times before I can solo.

Next, I did some straight ahead slow flight, turns in slow flight and then straight ahead and turning stalls. The L23 really wants to fly so my stalls were a little wimpy. Just a quick nose drop and we were flying again. My CFI assured me that it would enter a spin if I wasn’t coordinated when we stalled. He demonstrated that by intentionally stalling with the controls crossed and letting it spin for a half turn. He’s right, it does happen very fast. I’m sure we will do a lot more stall and spin awareness training on future flights.

We were encountering some areas of lift during these maneuvers so, we took advantage of the conditions to do a little thermaling. I would try turning in lift until I got out of it then my instructor would get us back in and let me try working it again. We got back to our initial release altitude quit rapidly and then I pitched down to fly at best glide speed while we looked for another thermal. One of the other sailplanes was working a thermal near us so I flew over to join him. We climbed until we were at the same altitude (apparently the top of the thermal) at which time he headed off in search of more lift. We followed for a short distance but soon broke it off and turned back toward the field.

I did more turns, more slow flight and some flight at various airspeeds to keep working on attitude flying and getting familiar with the sight picture. Finally, we were down to 2000 feet msl (1100 feet agl) and turned toward the runway for our landing. As we entered the downwind for runway 27, the tow plane was just lifting off with another glider in tow. That kind of messed up our pattern but, it was a good lesson in adjusting my base and final turns to always stay in position to land on the runway. There are no go-arounds in sailplanes! I had just a little trouble staying lined up on final. I was over controlling again. With a little CFI help at the last minute, we got down fine and rolled to a stop.

Once out of the glider, we talked about the flight. My instructor assured me that I had done a very good job. I wasn’t so sure up to then. I knew that I had some trouble getting used to the sensitivity of the controls and had been over controlling . He told me that was normal for power pilots making the transition and assured me I will get the feel quickly. We spend some time walking around a line on the hanger floor to help me get a better idea of the angles I should be looking for in the patterns. The idea is to be able to land without using the altimeter just by knowing what the angle to the ground should look like at each position in the pattern. Without power to bail you out, it is critical that every approach gets you to the runway. That and flying the tow will, probably, be the hardest things for me to learn.

We walked over to the table where Georgia was still keeping the flight log. She told us our flight had been 44 minutes. The longest of the day, up to then. The sign up list was now very long so I didn’t even try to get back on it for another flight. Besides, I was surprised at how tired I felt. It was just like the early flights of my power training. It was almost 2 pm by now anyway. I was ready for a rest and Georgia was ready to turn over the board to someone else so, we said our goodbyes and left to get some lunch before heading home. It was a very good first lesson and I look forward to more good ones to come.