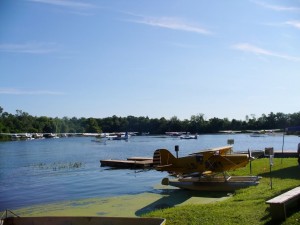 Tuesday I let Georgia sleep in while I caught the 7 AM North 40 bus over to the show grounds then walked to the main bus park to catch another one out to the seaplane base. The contrast between that location and the main site is amazing. While AirVenture at Wittman is sensory overload, the seaplane base is tranquil and relaxing – at least it was early in the morning when I was there. It is a wooded area on a bay of Lake Winnabago. I had wanted to come out here every year but just never got around to it until this trip. I will certainly go back. 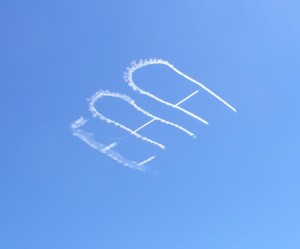 After I had taken it all in, I rode the bus back to the bus park, walked back to the North 40 bus turnaround point and took that one to the hotel to get Georgia. We loaded our – too much – stuff into the car and drove back to AirVenture for our second full day. It is amazing just how much we carry with us to events like this. We had lawn chairs, water bottles, hats, camera bags, small cooler and Georgia’s TravelScoot. Of course that doesn’t include what we pick up through the day. We always have more when we leave than we came with.

We walked down some of the side streets this morning. That included the LSA Mall where we saw a lot of new and interesting light sport aircraft. This is surely the fastest growing segment of general aviation. My favorites included the very capable new Super Legend from American Legend Aircraft, the kit built Zenith STOL CH 750 which can easily operate off a 400 foot strip,  the not new but very affordable ($60,000)  X-Air LS, and especially the amphibious Searey LSX. Any of these would be fun toys to have.

After lunch we went over to the flightline in time to see FiFi, the only flying B-29 Superfortress, arrive escorted by four P-51 Mustangs. Once the huge bomber was on the ground, the afternoon pre-airshow airshow kicked off in earnest with a formation of various Van’s RV homebuilts,  Bob Hoover’s P51 Mustang named Ole Yeller now owned by John Bagley, and  Chris Darnell taking the Team Chaos Flash Fire Jet Truck for a high speed run down runway 18.

This was a tribute to Bob Hoover day The airshow itself started off with Chuck Aaron in the Red Bull Helicopter. Next the sky filled with WWII aircraft. Everywhere you looked you could see liaison aircraft, fighters, transports and flights of trainers passing overhead. Nowhere but at AirVenture will you see so many vintage military aircraft in the air at one time. And this was just a preview – the main warbird show wouldn’t be until later in the week. The military portion of the show closed out with the Trojan Horseman six ship T-28 demonstration team. Then, the Liberty Parachute Team dropped in with their American Flag presentation.

The other airshow performers for day two included: Sean Tucker in his Oracle Challenger, Julie Clark doing aerial ballet in a T-34 Mentor, Georgia’s favorite the AeroShell Aerobatic Team in their T-6s, Steve Oliver and his Chipmunk named Skydancer, Kent Pietsch repeating his camper top landing demo in his Interstate Cadet, Scott Yoak who did a  routine in his P-51 Quicksilver dressed in a shirt and tie like Bob Hoover did it, Clyde Zellers with an SNJ, Corkey Fornof and a LoPresti Fury, and a special Bob Hoover Tribute featuring four of the aircraft Mr. Hoover flew including the P51 and Bob Odegard in a Shrike Commander making the famous Hoover dead stick landing.

As it turned out, that was the end of our 2011 AirVenture. We had planned to spend part of Wednesday there but the day started out with a soaking rain. By the time we checked out of the hotel at 10 AM, it was only a drizzle and we were almost fooled into going. I had looked at the radar though and I knew there was more rain coming. By the time we got onto Highway 41 headed south the sky opened up into a heavy downpour and we drove most of the way home in the rain. We will be back though. Planning for next year has already started. Maybe we can make it for the full week.

If you haven’t yet been to AirVenture, I encourage you to go soon. I have heard many people say they wish they had made their first trip sooner but I haven’t heard a single person say they wish they had put it off longer. Don’t miss out on general aviation’s greatest event. Start making your plans now.
AirVenture 2012 will be July 23-29 of next year. See you there!