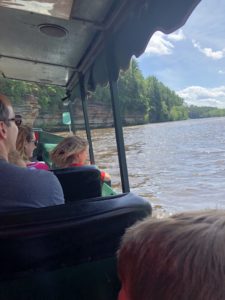 ​​We no longer have a travel trailer but, our grandson Maxwell remembers when we did. Since he was about three he has been asking if we can buy another one ​so we can take him camping.

Buying another trailer isn't an option right now but we did do the next best thing. Last week we rented a cabin at a campground near Wisconsin Dells and took Max there for a four night trip. Now that he is six, he is old enough to really enjoy The Dells.

​On Monday, we went to Chicago to get Max. We were not leaving until the next day but he would stay at our house Monday night so we could load the minivan and head out on our trip Tuesday morning.  He was excited and had trouble getting to sleep. I let him sleep in a little ​on Tuesday morning while I ​got everything​ loaded.

We ​were on the road about 10 am and made it to The Dells around 1:30. The trip took longer than expected because of a long detour for construction. Still, we were there in plenty of time to get some lunch before checking in at the Baraboo Hills Campground.

These are very nice deluxe cabins with private bathrooms. Something of a must for a six year old and his grandparents!

We unloaded and organized our little cabin and then went into Baraboo for groceries.

​By the time we got back and put everything away, it was getting pretty late in the evening. We decided to go out to eat rather than cook that first night so we went to the Log Cabin Restaurant. Max enjoyed the rustic atmosphere and the many animal carvings they have. The food is always good there too.

​After dinner we went back to the campground, made the beds and went for a walk before turning in for the night.

​Wednesday morning. I made bacon and eggs at the cabin before we left the ca​mpground for our first day in Wisconsin Dells itself. There were a few things we had planned to do and others that ​​would be more spur of the moment.

​We had planed to start with the Tommy Bartl​​ett Exploratory but, on the way there, we made an extra stop at Parson's Indian Trading Post. Parson's has been a fixture in Wisconsin Dells forever. It ​has been in operation since 1918 so it predates all the amusement parks, water parks and other attractions. I remember going there when I was not much older than Max.

We went through the museum to see the Native American artifacts and then shopped in the store when they ​sell native crafts as well as the usual tourist stuff. 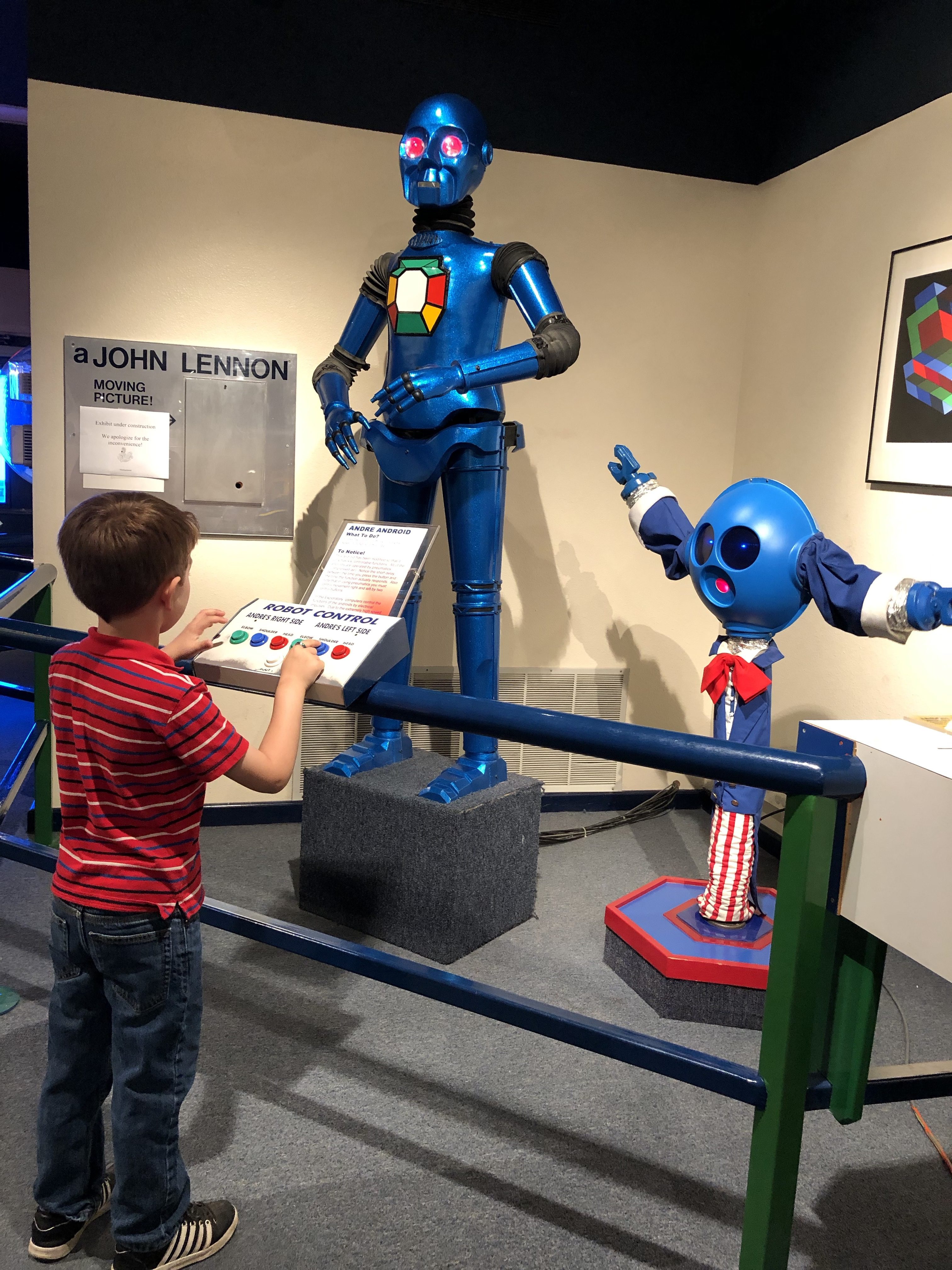 The Exploratory is just across the the parking lot from Parson's so it was a quick trip to get there.

This is a great place for kids with hundreds of hands on experiments that teach science, math and engineering in fun ways. ​The children play while they learn.

Max was fascinated with everything but really loved the interactive MIR space station and the robots.

The Exploratory filled up our time until we finally left to get a late lunch before our next planned event. 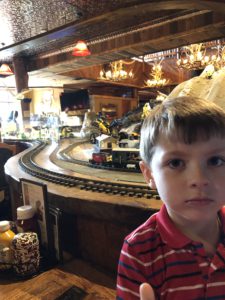 ​We went back the way we had come, into Lake Delton and to Buffalo Phil's Family Restaurant. The big attraction at Phil's is the train served food. Model train tracks run all over the serving floor and the trains drop off food right at the tables.

​The trains ​might be what gets people in but the food is good too. Buffalo Phil's is a must meal stop when visiting The Dells with kids.

​Phil's is right next door to another attraction called Knuckleheads. We would go there on another day but time was running out Wednesday and we had somewhere to be.

​Our last stop in Wisconsin Dells on this second day was the Rick Wilcox Magic ​​Show.

Max and I are both big magic fans and we had been looking forw​ard to seeing this show. Rick and his wife Susan Wilcox have been doing t​here magic show in The Dells for over 20 years. Georgia and I saw them for the first time almost that long ago.

Max has been practicing his own magic tricks at home and ​he actually knows how a lot of the tricks are done. He loves watching magicians on TV​ but was his first live magic show.

I was impressed at how sophisticated an audience member he was. Even when he knew how a trick was being done, he would applaud loudly and tell us how what a good job the magician was doing. 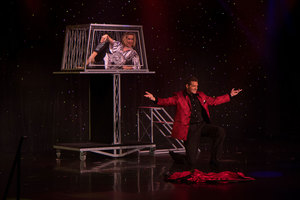 When he ​saw something new he was really enthusiastic. At one point Rick did the classic levitation trick of floating Susan in the air.

Max whispered to me, "We know how he does that right?"

Just then Rick added a twist to the act that neither of us saw coming.

Max jumped up and ​​yelled, "That was so good!"

​All three of us really enjoyed this show and we can recommend it to all Dells visitors.

After the magic show we went back to the cabin. I grilled hot dogs and brats for a quick dinner then Max and I played a game of mini golf. That turned out to be Max's favorite activity at the campground so we would play a few more times during our stay. 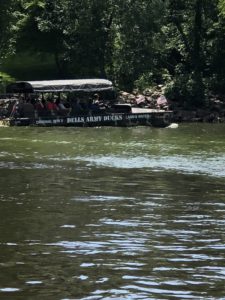 ​Wednesday was another day in Wisconsin Dells but we did get in a round of mini golf before we left the campground.

Our first stop today was at the Origina​​l Wisconsin Ducks for a ride through the woods, river and lake in one of these amphibious vehicles. It was Max's first duck ride and he ​had been looking forward to it.

This ​company was the first in the world to offer duck rides and have done it non-stop since 1946. It is another must for visitors to The Dells.

The tour leaves from downtown and heads into the forest where we bounced over ​trails and down steep hills that let the speed build up.

​Then the duck enters the Wisconsin River and turn​ed into a boat as we traveled past some of the famous rock formations that were the original tourist attraction in this area.

We left the river at Dells Creek and ​went overland again before splashing into Lake Delton. That entry into the lake is always a highlight of the tour.

After crossing the lake the tour goes into the woods again and ends back in downtown Wisconsin Dells. ​Not Georgia and my first duck tour but it was Max's and great fun for all of us. 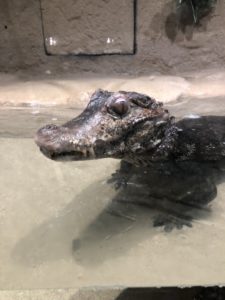 Our other stop was one Max picked out before we left home. He is very interested in alligators and wanted to go to Alligator All​​ey so he could see and feed some of them. They have a bunch of 'gators there as well as turtles, snakes, frogs and other reptiles and amphibians. By the way, it is one of the least expensive things you can do in The Dells.

We bought a package of meat for Max to feed to the alligators. You put the chucks into tubes above the water and use a plunger to push it into the enclosure. As it falls, the animals swarm after it. Really fun to watch.

After he ran out of meat, Max still had a great time going from enclosure to enclosure looking at the animals. They have some huge snakes and alligator snapping turtles but the star of the show for Max was the two headed snake. He couldn't get enough of watching him.

​Max's parents were coming up from Chicago for a short visit so we had to get back to the campground.

I put a chicken on the grill then we went up the mini golf course to play while we waited for Edwin and Angeli to get there.

They arrived as we finished our game and the first thing Max told them was that he saw a two headed snake! It sure made an impression on him. We all went on to the cabin and visited while the chicken finished cooking.

​Angeli and Max got the picnic table covered and I brought the chicken and sides there so we could eat outside.

​When dinner was done, I started a campfire and we toasted marshmallows​ to make s'mores for desert.

It was getting late so Angeli and Ed left to go ​check into their hotel and we got Max ready for bed at the cabin.

​Thursday was a day for Max to spend with his parents. They picked him up before lunch and spent most of the afternoon in the Dells. Max enjoyed go carting and had fun at the Deer Park. ​​The Deer Park is another place I remember from my childhood.

While Max was gone, Georgia and I went to Ho-Chunk Casino for a while. This is usually our main destination in The Dells but, on this trip, it was just a short break. After ​a couple hours there we went back to the cabin ​for a little rest time. 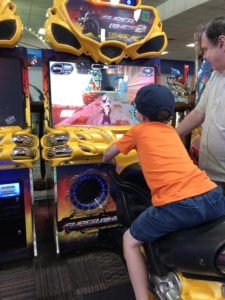 Ed and Angeli brought Max back in the late afternoon. They had to leave to go back to Chicago so the three of us went out to our last dinner of the vacation. Max picked Buffalo Phil's again for more train served food. I'm sure that if it had been up to him we would have eaten every meal there!

After we ate, we went next door to ​Knuckelheads Arcade​ to play some of the games. It was a fun way to pass the evening before we had to go back to the cabin and do some packing for the trip home the next day. 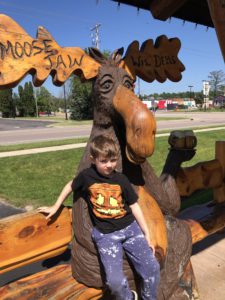 ​We would be making the drive home on Friday so we got up fairly early to finish packing and load the car. ​After a stop at the office to check out, we ​left the campground to look for a place to get some brunch.

The restaurant we picked was ​Moosejaw Pizza​ and Brewery. It might not sound like a breakfast place but they do have a great breakfast buffet.

All that was left was the drive ​back. We would take Max back to Chicago before we went home.

The drive went well, with just one quick lunch stop, until we got close to Chicago. Then we hit Friday rush hour traffic. The last 20 miles took longer than the first 120. But we got Max ​to his house and then drove home to Wauconda.

It was a very nice trip and we really liked having Max with us. We are both looking forward to future tr​avel with ​him.