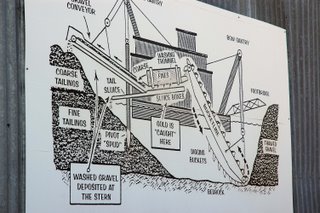 Our tour group, along with several others, gathered in the hotel lobby on Thursday morning. What seemed like total confusion to us was routine for the Holland America people who got everyone on the right buses and on their way without a problem. Our group was split up between two buses. One would take a riverboat tour in the morning and visit an old gold dredge in the afternoon. The other bus would reverse the schedule. We were in the latter group so our first stop was Gold Dredge Number 8. 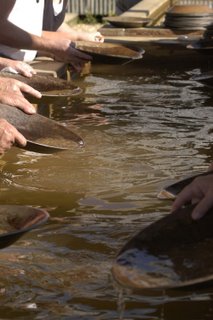 Several gold dredges worked the gravel beds of central Alaska in the early to mid 1900s. Dredge number 8 operated from 1928 to 1959. The tour of the dredge is a look into the history of Alaskan drift mining. Most of the machinery is still in place just as it was when the dredge was abandoned in 1959. After the dredge tour, we were given the opportunity to try some gold panning. I passed on that in favor of getting more pictures of the site and of those who were panning.

The dredge site was also our lunch stop. The meal of beef stew, biscuits and blueberry muffins was served family style in the camps mess hall. No excuse to leave this tour hungry.

Our afternoon trip was on the riverboat Discovery II. I really enjoyed this excursion. It is a great look at life in Alaska from the time of the ancient Athabascans to the current time. I get to put in a little more aviation content too. 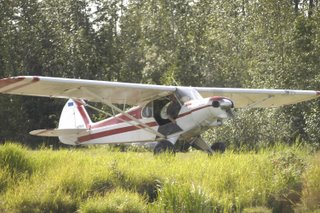 Right after leaving the dock, we came to a 900 foot gravel airstrip right on the river bank. The boat held position in the water while one of the local pilots gave us a demonstration of short field flying. He got his Super Cub off the ground in about 150 feet then came around and landed using less than half of the runway. It was an impressive look of the kind of bush flying that is going on everyday in Alaska. 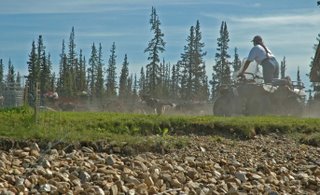 Our next stop was at Susan Butcher’s house. Susan was not there since she was in a hospital in Seattle battling leukemia. In her place, the sled dog demo was given by Jessie Royer who is another up and coming musher. She hitched her dogs to a 4-wheeler and took them for a run around the property to show us how they do summer training. This part of the story has a sad ending though. Susan Butcher died in Seattle a couple days after our visit to her home. 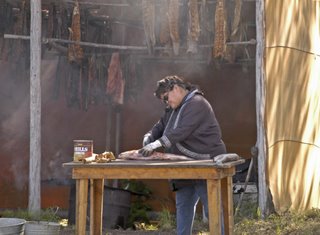 Stop number three was at a re-creation of an Athabascan fishing camp where Dixie Alexander talked about life in the camps and demonstrated how salmon are caught in fish wheels then cleaned and smoked for the family’s use. Near here, we saw the spot where the Chena and Tanana rivers come together in what is called the “wedding of the rivers.” 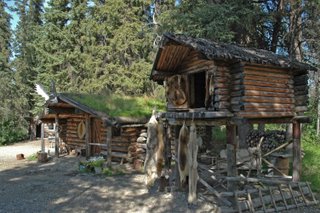 The next, and longest, stop was at the Chena Indian Village where the boat tied up and let us off for a guided tour of exhibits showing Athabascan life from ancient time to the present. We saw Dixie Alexander again at this stop where she exhibited animal skin clothing made in the Athabascan style. 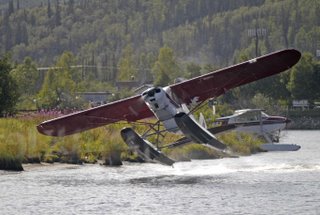 On the way back to the dock, we got one more bush pilot demonstration. The airplane was another Super Cub but this one was on floats. The pilot took off and landed right next to the boat to give us a good look. All along the river, we saw houses with airplanes and boats in the back yard. A confirmation of just how important the airplane is to life in Alaska.

This was another long day and we were ready to relax back at the hotel. Before turning in for the night, we packed an overnight bag for the trip to Denali. The rest of our luggage would be taken to the hotel in Anchorage to await our arrival there on Saturday. 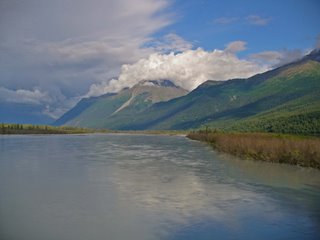 Friday morning we were back in the lobby waiting to get on another bus. This would be a short ride to the train station where we boarded one of the McKinley Explorer dome railway cars for our trip to Denali National Park. It was a relaxing morning when we could just sit back and watch the spectacular scenery through the dome of the car. The landscape of interior Alaska in definitely different from that of the coast so there was always something new to see.

Not long before the train entered the park, we stopped to pick up a representative of the McKinley Chalet Resort who gave us packages with our room keys and tickets for the afternoon tour of the park. Our room was F132V which seemed a little odd until we learned that the V stood for view room. That was something to look forward to.

The train got into the station a little before noon and our bus tour was scheduled for 1:30 PM. That gave us just enough time to get to the room, which really did have a great view, and drop off our overnight bag and some of the heavy camera gear. We had been offered a chance to purchase a sack lunch on the train and we were glad we had. We ate at a table in the courtyard of the resort then went out front to board our bus.

The Denali Natural History Tour goes a little further into the park than cars are allowed to go. The bus makes it first stop at one of the visitors centers where we watched a short film about the history of the park. We had been told several times to be sure and look up at the windows as we left the building. Here they are so that you can see them too. 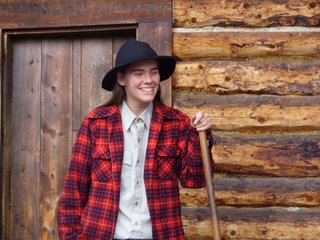 Stop number two is at the Savage Cabin interpretive Trail. A short walk led to an old log cabin where a park employee talked to us about life in the Alaskan wilderness of 100 years ago. A little longer walk back to the bus is lined by many native Alaskan plants and has a couple scenic views as a bonus. Just beyond this stop, we got a brief glimpse of a moose retreating into the heavy brush beside the road.

The next stop was a scenic overlook where we saw the place where Mt. McKinley would have been visible if it hadn’t been covered in clouds. We didn’t get a chance to see the mountain during our entire stay at Denali. The area we were in was sunny but McKinley was wrapped in clouds the whole time.

A little further along and we saw a caribou on the other side of the road. This animal was also in the brush so all we could really see was his antlers and sometimes part of his head and back. 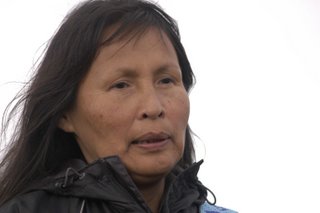 The stop at the end of the route was at Primrose Ridge where we were met by an Athabascan woman named Shirley who told traditional stories and shared a traditional dance and song. We could have seen Mt. McKinley from here too – but it was still hiding from us. It was still a wonderful view, even without the main attraction. 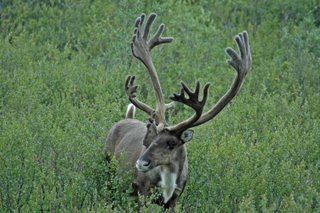 On the way back to the resort, we had our best wildlife encounter of the trip. A caribou just off the road decided to stay within our view for several minutes. We snapped off a lot of pictures of him in that time.

Back at the chalet, we got some dinner in the hotel restaurant and retired to our room. 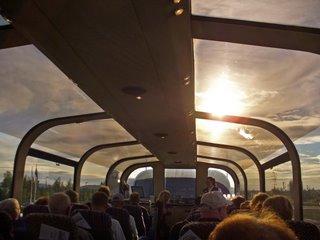 We boarded the McKinley explorer again this morning for the trip to anchorage. More gorgeous scenery including another look at the place Mt. McKinley would be if it was visible. We had a late breakfast before boarding the train so we opted to skip lunch and have an early dinner in the dining car. Until then, we just sat back and relaxed. The only wildlife we saw on this leg was a quick glimpse of a grizzly bear and her cub fishing in one of the many streams we crossed. There was not enough time to get a picture. 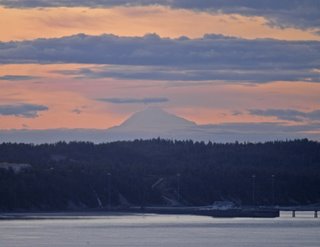 Shortly after dinner, we pulled into the Anchorage station where buses were waiting to take us the short distance to the Hilton Hotel. Our room was on the 13th floor (officially 14 but we know that 13 comes after 12) with a great view to the north and west. Just before sunset, the clouds to the north cleared and Mt. McKinley came into view 120 miles away. The mountain had hidden from us the whole time we were in Denali but gave us a this one peek before we left Alaska.

Our flight home on Sunday was at 9:45 PM so we had the whole day to spend in Anchorage. The hotel stored our luggage for us after we checked out so we were free to walk around town unencumbered. The first place we wanted to go was the Saturday/Sunday market right across the street from the hotel. It is a huge street market with food, crafts, products and entertainment from local vendors and performers. If you want to do souvenir shopping in Anchorage, this is probably the best place to do it.

Leaving the market, we walked up the street for a couple blocks to have lunch then did a little more shopping until it was time to go back to the hotel and catch the transfer to the airport.

Our flight aboard an Alaska Air 737 left Anchorage at 10PM Alaska time and arrived at Chicago O’Hare airport about 7AM Chicago time. We were tired and glad to be home but sorry to see the trip end too. As the Alaska tourist brochures say, “Once you’ve gone to Alaska, you never come all the way back.”