Sitka is another tender port so we met our group in Pharaoh’s Palace before boarding the tender for the trip to shore. This was the first day that we saw the more typical southeastern Alaska weather. The day was cool and rainy but, since out first excursion was in a semi-submersible boat, it wouldn’t have much effect on us in the morning. The Sea Life Discovery was waiting for us at the same pier the tender tied up to so we only had to go a few steps in the rain. 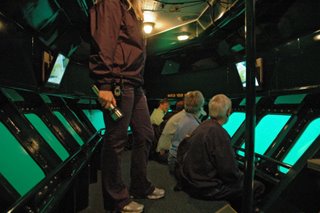 The semi-submersible is sort of a cross between a glass bottom boat and a submarine. It rides very low in the water with the passengers seated about 6 feet below the waterline. This meant that we didn’t have to be looking down all the time to see the undersea vista.

Our first stop was a shallow area covered with thick undersea grasses. Several species of fish were using the plants as hiding places. On the bottom, we saw sunflower starfish, clams and crabs.

Stop two was a kelp forest in much deeper water. In addition to the fish and starfish, we saw many snails and hermit crabs on the kelp leaves. As we moved slowly through the kelp, we also began to see jelly fish of various sizes drifting close to the windows. 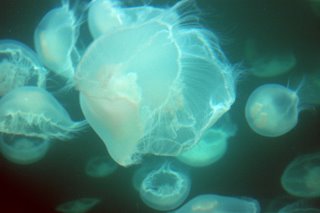 Our third stop was supposed to be a specially built, underwater dock where divers would enter the water to show us specimens of sea life. We were diverted from our route when the captain spotted a large group of moon jellyfish near the boat. With a little maneuvering, she was able to position us in the middle of it. Suddenly, there were jellyfish all around us and as far as we could see through the murky water. The boats naturalist assured us that this massing of the moon jellyfish only happens a couple times a year and that to be able to position the boat within the group was even rarer. It was an amazing sight. 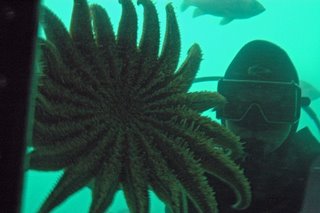 After our encounter with the jellyfish, we moved on to the under water dock. Two divers entered the water to give us a closer look at the sea life. One diver brought up a starfish and swam around the boat holding it close to each window. The second diver took a video camera down to the bottom and filmed what he saw down there. The images were shown on monitors around the boat.

Leaving the dock to go back to the Sitka harbor, we all went up to the upper deck. The deck was covered with a canvas canopy to keep us dry and set up with a table. We were served crackers with a salmon dip top by kelp pickles. Another kind of cracker had kelp marmalade on them. The kelp treats were surprisingly good.

It was still raining steadily so, once back on the dock, we decided to skip the tour of the town that we had scheduled. We caught a tender back to the ship for a little relaxation time. I spent most of the afternoon on the balcony watching bald eagles that were flying from the mainland out to an island in the harbor and back. If you go to Alaska, be sure to take binoculars with you. We found many occasions when we were very glad we had them.

We dressed and went down for the second formal dinner night then made our way to the show lounge to see the musical that was the main entertainment for the night. 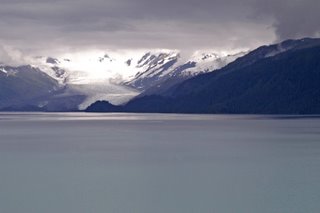 This was the last full day of the cruise and the second sea day. The captain had promised that today would be the highlight of the cruise so we were eagerly anticipating the ships entry into College Fjord in the afternoon. We did a little final shopping in the onboard shops, had lunch on the Lido deck and generally just killed time.

Finally, about 3:30 PM, the ship’s naturalist came on the public address system to announce that we had entered the fjord. We took our chairs on the balcony with binoculars and cameras ready. The first glaciers were already in view and we were soon seeing floating ice around the ship.

We could see Harvard Glacier growing larger and larger ahead of the ship. The open decks were getting crowded with passengers from the inside cabins so we were glad we had chosen to have a balcony of our own. A little further along, we encountered large numbers of sea otters floating on their backs with ice chunks all around them. Their were also seals on some of the larger ice bergs but, unfortunately, none visible on our side of the ship. 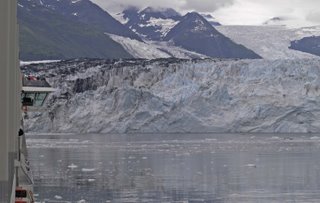 The captain moved the ship closer and closer to the glacier then turned sideways to place the starboard side, which we were on, parallel to it. The maneuvering thrusters brought us closer until we were less than 1000 feet from the face. We could clearly see into the fissures where the ice was a deep aquamarine blue. This is not caused by the blue of the sky but is because the ice is so compressed and dense that only the blue spectrum is reflected from it. 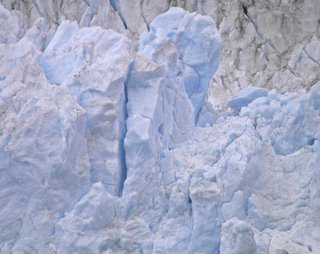 Everyone on board must have been as awed as we were because no one was speaking. It seemed very quite at first, but we soon became aware of the sounds that the glacier itself was making. This is not a static thing but rather a moving river of ice that creaks and groans as it slowly pushes into the sea. The ice floating around us was also making noise. The air bubbles within the ice are highly compressed so that when they break, as ice melts, they make popping noises. Small pieces of the heavy ice sounded like shotgun blasts when they fell into the water below the face. Sometimes these small chunks were all that fell. Other times they were just a prelude to the calving of a larger section of the ice wall. These made a noise more like a cannon shot than a gun blast. 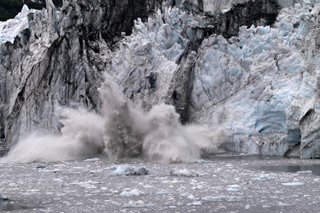 The falling ice was moving away from the glacier and toward the ship making it impossible for the captain to turn around and face the port side toward the glacier. This was good for those of us on the starboard side but meant that the passengers in port side cabins had to find space on the deck. 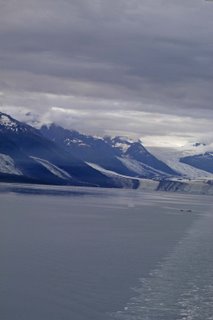 In all, we stayed in position for over an hour just watching the action. Finally, it became necessary to pull away and turn the ships stern on the glacier. It had been some show and really was a highlight of the cruise. We had gotten so caught up in the spectacle that we decided to skip dinner so we could stay on our balcony. Now that we were pulling away, we went up to the Lido deck to get something to eat.

Day 8 – Whittier and Anchorage to Fairbanks

The ship tied up to the dock in Whittier, Alaska about 12:30 AM but debarkation wouldn’t begin until sometime after 7:00 o’clock. In the mean time, luggage was being taken off the ship and sent on to Anchorage. In our case, we would meet up with our suitcases at the Anchorage airport later in the morning. Passengers who were staying longer would have their luggage waiting at their hotels. 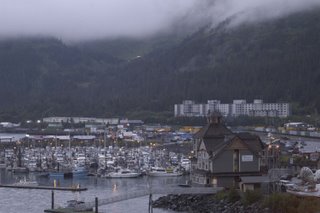 Whittier is one of the most unusual town in America. All of the, approximately, 200 residents live in one condominium building. The building also houses shops, a theater, a bowling alley and other amenities. There is only one road into the town and it runs through a one way tunnel that the roadway shares with the railroad. Traffic into town goes through the tunnel on the hour while outbound traffic goes through on the half hour and vehicles drive on the railroad tracks.

We got off the ship a little after 8:00 AM and boarded a bus. There was a short wait at the tunnel then an hour drive to Anchorage. At the airport, we picked up our luggage and got on an Alaska Airlines MD-80 for the flight to Fairbanks where we arrived about 3:00 PM.

We were met at the Fairbanks airport by representatives of Holland America’s Gray Line Alaska who took very good care of us for the next four days. I give great credit to those Holland America people who did such an amazing job of getting our tour group, and all it’s luggage, from place to place without a hitch. All we had to do was relax and enjoy the trip while they did all the work.

Another bus took us to the Westmark Hotel and our luggage was delivered to the room within a few minutes of our arrival. It had been another long day so we were content to have dinner in the hotel’s Northern Latitudes Restaurant and just unwind in our room for the evening.