I was up early on the third morning so I sat out on the balcony and watched while the ship was anchored in the harbor. Ketchikan is a busy port and the docks can’t handle all the cruise ships that visit. The lines take turns anchoring and tendering their passenger to shore and today was Carnival’s turn to tender. We had to be in the Pharaoh’s Palace lounge by 7:45 AM to meet our tender group. A 5 minute trip in one of the ships lifeboats had us on shore by 8 AM.

Our first excursion of the day was to the Great Alaskan Lumberjack Show. The 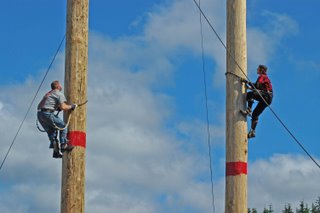 show is a little bit touristy but still very entertaining and fun. The performers are good at getting the crowd involved which added to the excitement of the “competition.” The unusually warm and sunny weather helped make this a very pleasant outing.

Our afternoon excursion was entirely different. This one was a Misty Fjords Flightseeing trip in a float plane. The Misty Fjords National Monument and Wilderness is part of the Tongass National Forest. This area ranges from temperate rain forest and muskeg at the lower elevations to an alpine zone above timber line. 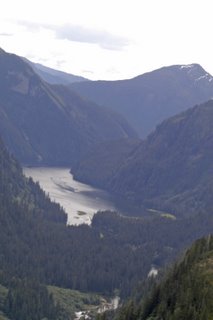 I had hoped that we would be flying in a Beaver but, because of the size of the group, we actually ended up in an Otter. I wasn’t disappointed for long though since the flight was such a wonderful experience.

Seeing the southeastern Alaska landscape from the air is amazing. We took off from the Ketchikan harbor, right next to the cruise ship, and flew through snow covered mountains and over deep, glacier carved valleys and fjords until finally landing on a fjord deep in the mountains. Once the engine was shut down, the only sound was the lap of water against the floats.

After our short stop, we took off again and flew back by a different, but no less spectacular, route. We landed next to the ship and taxied back to the Promech Air dock. We were back on board the Spirit in time to share the account of the days activities with our dinner companions. 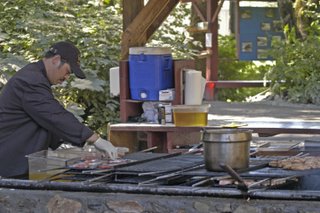 We had a more leisurely departure from the ship this morning. The ship was tied up at the dock in Juneau and we had nothing planned until lunch. We walked down the gangway about 10 AM so that we could look around a little before we got on the bus that would take us to the Gold Creek Salmon Bake. The salmon bake is located in a wooded area with a salmon spawning stream running through it. This was another warm, sunny day and it was pleasant under the trees. We enjoyed a lunch of fresh glazed salmon with a buffet of ribs, chicken, salads and vegetables followed up with blueberry cake with more of the brown sugar salmon glaze poured over it.

After lunch, we had time to stroll around the grounds, watch the salmon swimming up the stream, and get a few pictures of the waterfall that limits how far the fish could go. As we boarded the bus to go back to the dock, we heard people talking about a black bear that was in a tree just a few yards down stream. We didn’t see the bear but we heard later that other visitors from our ship did. 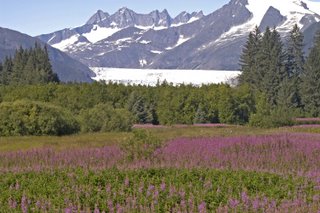 Our bus driver made a short stop at a pullout so that we could get a look at the Mendenhall glacier. It seem incredible that the entire valley we were in was carved out by the sheet of ice in front of us.

Back in town, we had a little time to look around the shops near the dock before we left on the Evening Whale Quest. Another bus delivered us to the Allen Marine dock where we boarded a comfortable whale watching boat and moved out into Stephen’s Passage in search of whales. The center isle of the boat was set up with tables full of appetizers like salmon pate and reindeer sausage. There was no time on this whole trip when we had any excuse to go hungry.

We encountered the first humpback whales within a half hour or so. This was a pod of three that was just diving as we came upon them. The captain kept the boat in place until the whales resurfaced and then stayed with them until they made their next dive. These were the first whales that Georgia and I had seen so it was an exciting time for us. We were both clicking our cameras as fast as we could. The boats are not supposed to spend more than a half hour with any group of whales so we moved on after they made the second dive. 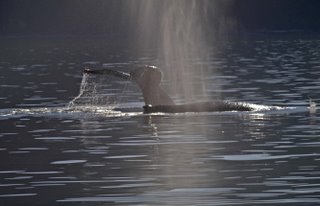 Further out in the passage, we saw the bore wave that marked the tide coming in. We could see groups of whales all along the wave. There were at least ten in the area near the boat with some on the surface all the time. In addition to the time limit, the boats are supposed to stay at least a hundred yard from the whales. Fortunately, the animals don’t know the rules and one surfaced within a few feet of the boat, giving everyone on board a thrill.

All too soon, it was time to head back to the dock so that we would be on board the ship before sailing time. Along the way, the captain took us by a buoy that was a resting place for a group of bachelor sea lions. The lazy bunch was enjoying their sun bath and didn’t move more than enough to turn their heads and watch as we circled around them before continuing on our way. 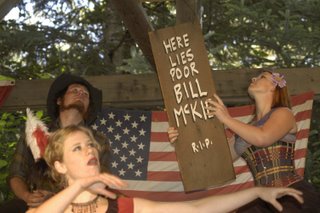 Yet another sunny day. This morning’s excursion was another tourist type trip. This one a trolley tour of Skagway and a stop at Liarsville for a snack and a show.

The tour starts out at the cruise ship dock and goes through downtown Skagway and on to Liarsville – the place where the newspaper reporters set up camp when they went to Skagway to cover the gold rush of 1898. The present day Liarsville is a place to hear some music and Robert W. Service poetry while having a little fun in the outdoors. 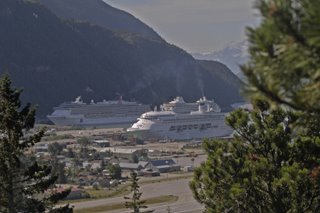 On the way back, the trolley stopped at the Gold Rush Cemetery where we saw Soapy Smith’s grave and that of Frank Reid, the man who shot Soapy. The final stop was at an overlook for a view of the ships in the harbor. Lest you think I forgot about the aviation content, you can see part of the Skagway airport at the bottom of the picture.

Shortly after getting back to the dock, we left for our other excursion of the day. This one was a ride on the White Pass and Yukon Railway. If you travel to Skagway, don’t miss this ride. 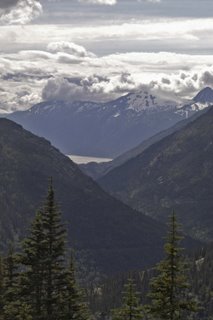 The trip we took went through Skagway, up the White Pass and just across the border into Canada. Here is where we saw some of the most spectacular scenery of our whole Alaska trip. For much of the way, the railroad follows the same path that the stampeders followed in 1898. There are places where the narrow and treacherous old trail is still visible.

Along the route we saw high mountain peaks and steep sided valleys. Bridal Veil Falls and Pitchfork Falls are two of many waterfalls that flow from the snows high up on the mountains. As the train clattered across the high tressel, we could look down almost a thousand feet to the river below.

It was a long day and, by the time we got back on the ship, we were ready for a relaxing dinner and evening on the balcony.