We got back from Alaska this morning. The heading at the right warns that I might post about an occasional non-flying adventure and, this is one of those. Although I didn’t do any flying on the trip, there are still going to be many references to aviation. It is almost impossible to spend any time in Alaska without encountering airplanes. The state has more certificated pilots, per capita, than any other state in the union. We saw airplanes everywhere in Alaska and they will come up in this narrative.

I am breaking this up into four parts to avoid one monstrously long one and it will probably take a few days to get all of then done. So, here is what I did on my summer vacation.

On 25 July we boarded an American Airlines MD-80 for the flight from Chicago to Seattle. After a 2 hour layover in Seattle, we flew to Vancouver, British Columbia aboard an Alaska Airlines Dash-8 Q200 turboprop. From the Vancouver airport, it was just a short ride to our downtown hotel where we arrived about 7 pm local time. We had dinner at the hotel restaurant, explored a little of downtown Vancouver and then turned in early.

Day 2 – Vancouver tour and aboard ship 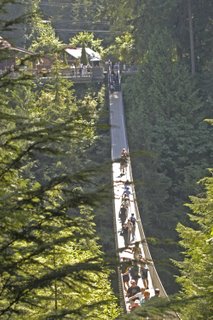 Our cruise ship didn’t sail until 5pm on Wednesday so we scheduled a tour of Vancouver. The tour bus would pick us up at our hotel and drop us off at the cruise ship terminal later in the day. Vancouver is a beautiful city so we were glad that we took this option to get to the ship. The walk across the Capilano bridge was an experience. It really gets bouncy when a lot of people are on it. I tried to take pictures from the middle but it was moving around way too much.

We boarded the Carnival Spirit about 2pm. We cruised on the Carnival Miracle last year and the layout of the two ships is identical. That made us feel at home right from the start. We had requested early seating dinner but, our boarding cards showed us scheduled for late seating. We got that straightened out by the second night but, for this first day, we went up to the Lido deck to have a light snack to tide us over. 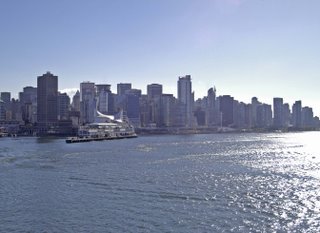 After eating, we went to our cabin and got mostly unpacked before the life boat drill. Following that required exercise, we returned to the cabin and watched the shoreline from our balcony as we sailed away from Vancouver and out into the inside passage then headed on down to dinner. We spent the rest of the evening exploring the ship and watching the scenery.

Day 3 – Cruising the Inside Passage

This was an at sea day which gave us a more of a chance to adjust to the time change and get acclimated to being on the ship. We slept in a little then had breakfast on the Lido deck. I’m glad we did the north bound version of this cruise. The scenery along the British Columbia coast is impressive but, if we had seen it at the end of the trip, we might have taken it for granted.

In the afternoon, we attended the cruise director’s ports of call talk and the wildlife talk given by the ship’s naturalist. Tonight was the first formal dinner of the cruise and we were now scheduled for the early seating so, we went to our cabin to dress and then down to the Empire dining room where we met our new table mates. 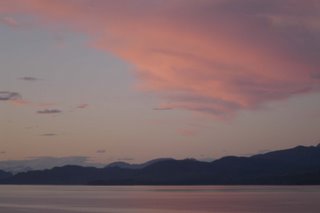 After dinner we stayed around the lobby and had some formal portraits taken by the ships photographers. Then, back to our cabin, we changed into more casual clothes and watched the sunset from our balcony. Tomorrow we would be up early for our first day ashore in Alaska.