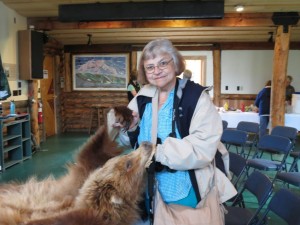 We left Anchorage Sunday morning on our way to Denali National Park. We would be spending two nights there which was one of the main reasons we picked this particular cruise tour. After one stop at the Alaska Veterans Memorial, we arrived at the Denali Visitor Center in the late morning. Georgia stayed there to shop and rest while I went on a 1.5 mile introductory hike into the park. Rob picked us up at the end of the hike (Georgia was already on the bus) and dropped us at the Denali Educational Center where we were given an introductory talk and served a hot dog lunch. 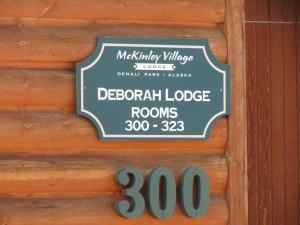 From the center, we got a golf cart ride to the McKinley Village Lodge which would be the home base for our stay at the park. McKinley Village is a group of buildings on the bank of the Nenana River. After checking out the Summit Lodge, which is the main building, we went over to Deborah Lodge where our room was located. Jane had warned us that, compared to the rooms we had the previous two nights, this one would be pretty basic. But, it was clean and comfortable and we were perfectly happy with it. 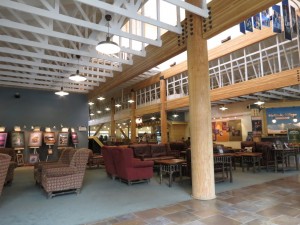 We had the park’s Tundra Wilderness Tour booked for the next day so we went back to the main lodge to meet up with Jane and get our tour time. It was going to be at 7 AM so we would have another early morning. We walked around the grounds for a little while, had dinner in the Gold Rush Dining Room then went back to the room to relax for the evening. 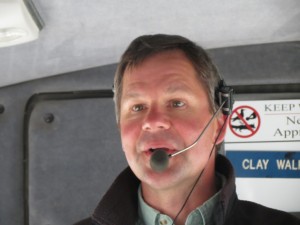 The next morning we were back at the Summit Lodge early to get breakfast before our long tour. Jane met us there with our tickets and we boarded one of the park buses for our Tundra Wilderness Tour. Our guide Clay greeted us and, after a stop to pick up more passengers at the Denali Princess Lodge, we headed into the park. 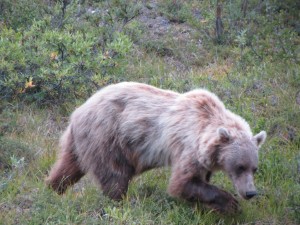 Although we were all watching, we didn’t see any wildlife in the first 15 miles of the tour. That is as far as private vehicles are allowed to go so, had we been on our own, we wouldn’t have seen much at all. But since we were on a park bus, we continued past the ranger’s check point and soon came upon our first animal of the day – a grizzly bear right beside the road. Then, just beyond that bear, we came across a second one although this one was a little further from the road. 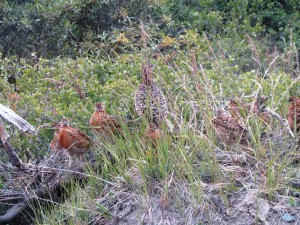 The third wildlife encounter was a family of ptarmigan, Alaska’s state bird. This group included a female with her chicks and the male close by. The birds were in their brown summer plumage. Later they will change to all white to blend in with the snow. 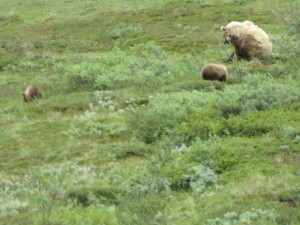 This sighting was followed by one of a female grizzly and two cubs. When the bus stopped, the cubs took off on the run to get close to their mother. She ignored the bus and just kept eating so the cubs settled down and copied her.

I don’t have space go into detail about each of our wildlife encounters but, over the nine hour tour, we saw fifteen grizzlies ( Clay’s highest count for the year), many caribou, a few Dall sheep high up on the slopes, an arctic ground squirrel and a pika. 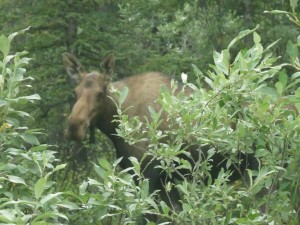 What we hadn’t seen though was a moose. In wasn’t until the tour was almost over that we finally came across one. We were back down to a lower elevation by then and once we saw the first moose we quickly found two more. They were feeding in thick willows and, even though they were close to the road, they were very hard to see.

This drive was not just about the animals though. We went through some gorgeous country including the polychrome pass at the tours highest point. The tour is planned for 53 miles into the park but can be extended another 9 miles – which is what Clay did. We were trying to get a glimpse of Mt. McKinley but it just didn’t happen. As it is on most days, the big mountain was obscured by clouds.

We arrived back at the lodge in the late afternoon – tired but very satisfied with the experience we just had. 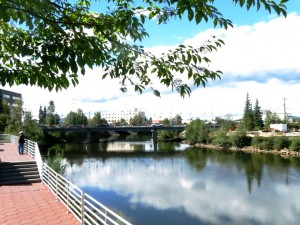 On Tuesday, we again boarded the motorcoach and made the relatively short drive to Fairbanks. Rob dropped us off downtown where we had a couple hours on our own. Georgia and I had lunch (but no fudge) at the Fudge Pot then went shopping until the bus returned to pick us up. 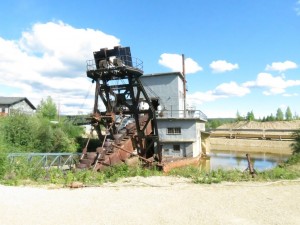 Our next stop, and the last “official” tour of our cruisetour, was at Gold Dredge No. 8. Now, Georgia and I visited the dredge when we were in Alaska in 2006 and were not really excited about seeing it again. Back then the dredge was just setting out in a field where it ended up when it stopped working in 1959. Other than walking through it, there really wasn’t much to see. I am happy to say that a lot has changed at the site in the last six years. 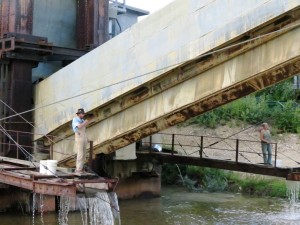 Now, the site is much larger and a small train carries visitors past displays of different mining methods used in the Fairbanks Mining District over the years. Water is again flowing through the dredge’s sluice boxes and the guides make some very good educational presentations. 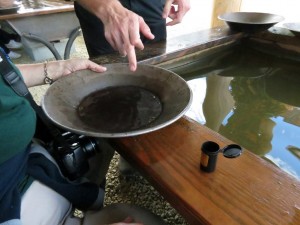 After the mining tour, the train let us off at the gold panning area. Yes, this part of the tour is definitely aimed at separating tourist from their money. The bags of gravel they gave us to pan are, of course, salted with small flakes of gold. Still, the panning technique is the same whether the gravel comes from a stream or a pile behind the store so we learned a little about how to pan for gold. We combined the gold we found and Georgia bought a small pendant with the flakes inside as a souvenir. All in all,Gold Dredge No. 8, while still touristy, is much better than it used to be. 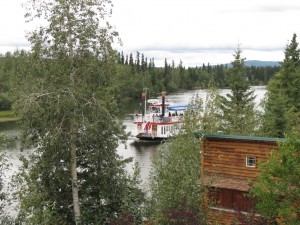 At the end of the day, we got off the bus for the last time at Pikes Waterfront Lodge on the Chena River where we said goodbye to Rob and Jane. This was the end of the cruisetour so, from here on, Georgia and I would be on our own.

Pikes advertises itself as “The friendliest hotel in Fairbanks.” We haven’t stayed at all of them so we can’t verify that by experience but, the staff at Pike’s was certainly very helpful and friendly to us. We enjoyed our four day stay very much.