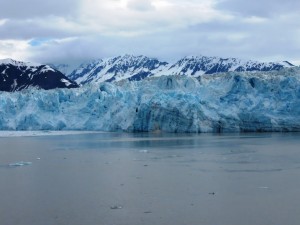 Our last full day of the cruise portion of our cruisetour was a sea day with a stop at the Hubbard Glacier. We started out by watching the approach to the glacier from our balcony. The captain first turned the starboard side toward it so we were able to get a very good view. I was trying to catch a calving event on video but kept missing them. Finally though, I was able to record the largest one of the day. My video is below. 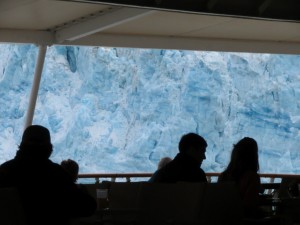 When the ship turned to face the port side toward the glacier, we went up to the Windjammer Cafe on deck 11 to get breakfast and watch the ice from there. Glaciers are fascinating things to watch and listen to. They pop, creak and boom as they move – too slow to see except when the chunks fall off but not to slow to hear. The ice in the water crackles and pops as the trapped air is released by melting.

Late in the morning we left Disenchantment Bay, sailed through Yakutat Bay,and entered the Gulf of Alaska for our final run to Seward. With only water to see around us, we packed out bags, picked up our picture package and got ready to leave the ship in the morning.

When I woke up Friday Morning, the ship was already docked in Seward. The first passengers would be disembarking at 6 AM but we were not scheduled to depart until 9:30. Since we were staying with Royal Caribbean for the land portion of our cruisetour, we were supposed to be meeting our tour guides at that time. However, when 9:30 came around, we were told that our guides were missing. Construction had delayed their drive from Anchorage to Seward. Rather than keep us on the ship until they got there though, we were taken to the Alaska Sealife Center (our first tour stop) by motorcoach and met up with the guides there. 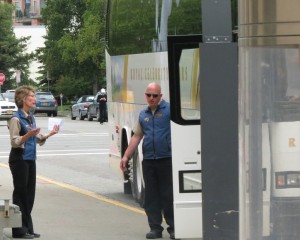 Our tour guide was Jane and she met us outside the Sealife Center with our tickets. Jane would be traveling with us for the next 5 days and took excellent care of all our hotel and tour arrangements as well as providing knowledgeable commentary as we drove from place to place and dealing with all the questions and requests of her 26 guests.

Later we would also meet our driver, Rob, who not only transported us safely over our long route but also made sure our luggage was in our hotel rooms each night and was back on the motorcoach before we left each morning. 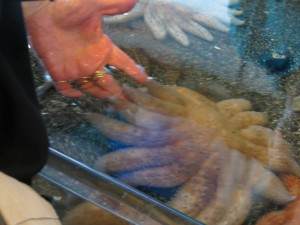 The Sealife Center itself has some interesting exhibits. Many are interactive and allow visitors to touch the animals. There is also underwater viewing of fish, sea lions and seabirds.

The center is right on Resurrection Bay and provides a magnificent view of that body of water from an observation deck. 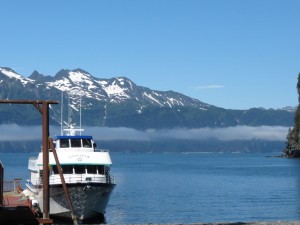 From the Sealife Center, we got back on the bus for a short drive to the town docks where we boarded the tour boat Nunatak for a Resurrection Bay cruise with Kenai Fjords Tours. The first order of business was a stop at Fox Island for a salmon and prime rib lunch. While we ate we watched a presentation on the Kenai Fjords National Park given by a park ranger. 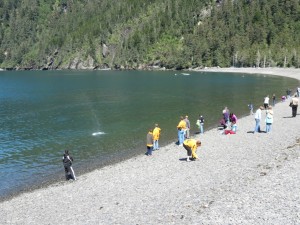 After lunch, we all went down to the “skipping stone” beach. The beach is covered with smooth, flat stones that are perfect for skipping. Most of the group gave it a try before getting back aboard the Nunatak. 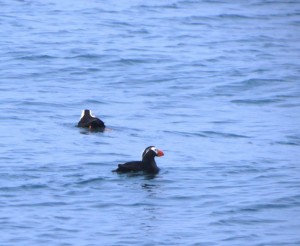 From Fox Island, we cruised further out  into the bay looking for wildlife. One of the first sightings was a special treat for Georgia and I. We had been hoping to see puffins and we came across many of them on this tour.  Alaska is home to both the tufted and the horned species of puffins and we saw both. 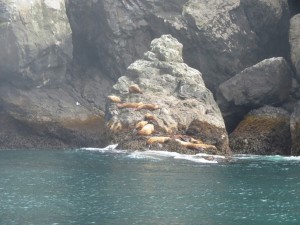 Another plentiful animal we saw on Resurrection Bay were Steller sea lions. They were sunning themselves on the rocks near shore and pretty much just ignored our boat. 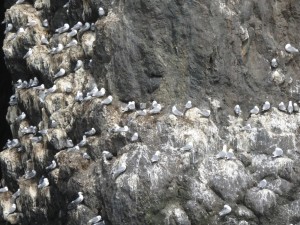 The rock cliffs are also home to huge numbers of birds including puffins, gulls, common Murres, and many more. We saw them all over the cliffs as well as on the water. 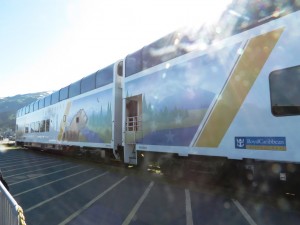 By mid afternoon, we were back at the dock and then on the bus which took us across town to the Alaska Railroad station and our reserved rail cars that would take us to Girdwood, Alaska.

The train carried us in luxury through more of the amazing Alaska scenery. The domed top upper level offered panoramic views while the lower level dining room provided us with a gourmet dinner. 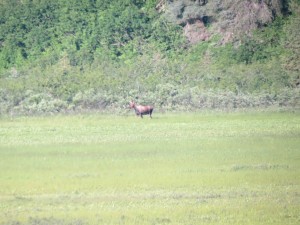 Close to the end of our ride, the lady in the seat behind us called out that she saw a moose. It was far from the train but the rest of us located it too. The word was spread through the car and reached the train staff. The engineer actually brought the train to a complete stop so we could get a longer look. 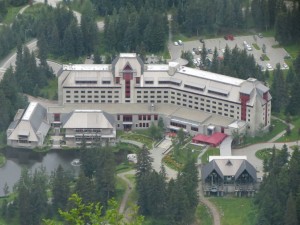 Rob met us at the Girdwood station and took us to Alyeska Resort where we would spend our first night ashore. Jane handed us our key packets that included tickets for the Alyeska Tramway.  Georgia and I wanted to ride the tram up the mountain but it was almost 10 PM and the tram had stopped at 9:30. We would have to do it in the morning before the motorcoach left for Anchorage. Jane advised us to catch the first tram at 9:30 AM so we would be back down in time to board the bus by 10:30.

We went on up to our very nice room and repacked a couple of our suitcases so that we would only need two delivered to our room each night. The other two could stay on the bus until the tour ended in Fairbanks. Then it was to bed. 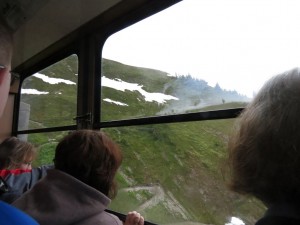 Saturday morning we got up early to eat breakfast and look around the resort before the tram start running. Finally it was time to board the first tram and rise up the mountain above the snow line. The tram takes almost 10 minutes to climb 2300 feet.

At the top, we got off and walked to the observation deck to get photos of the resort far below us. The deck is between the tram station and a small gift shop. I walked over to the edge and took a couple pictures wondering why I was the only one there. 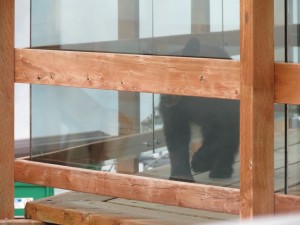 Georgia was coming down the stairs toward me and I turned back to help her. That’s when I saw the black bear coming around the corner of the gift shop! It looked like he was going to come out on the observation deck where I was standing so I told Georgia not to come down and then followed her back up the stairs. 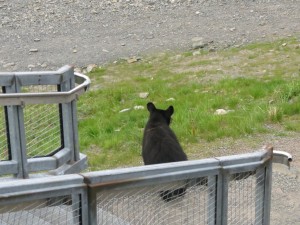 The bear decided he didn’t want anything to do with the people who had just arrived to disturb his peaceful morning and turned back down another set of steps to the ground then hightailed it back into the woods. I’m sure he enjoyed having the place to himself before that first tram full of humans arrived. Two trips to Alaska and the first bear we encounter was at a gift shop! We had a story to tell our fellow guests on the bus ride to Anchorage that morning. 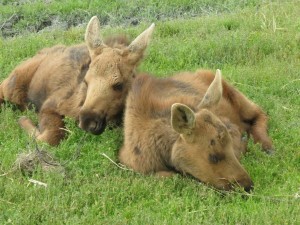 Before leaving Girdwood, we made a stop at the Alaska Wildlife Conservation Center. The center takes in injured and orphaned animals for rehabilitation. Those that can’t be released back into the wild have a permanent home at the center. 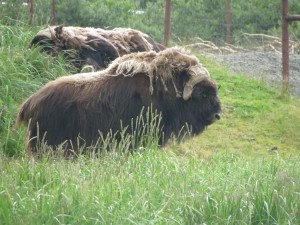 We saw bears, moose, elk, caribou and reindeer, lynx, a porcupine, an owl, and an eagle. I was happy to see that the center was also home to several musk oxen. These prehistoric looking animals are one of my favorites.

One special project at the conservation center is a herd of wood bison that were brought in from Canada. The wood bison has been extinct in Alaska for 100 years. Plans are to build up this herd and then release them to repopulate the species.

We had lunch at the center than got back on the motorcoach for the drive to our next nights stop. 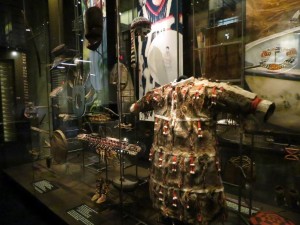 Rob dropped us off at the Anchorage Museum where we were free to explore on our own for a few hours. The Eskimo exhibits were the most interesting to me. It was fascinating to see just how resourceful they were (and are) at using the natural materials available to them. 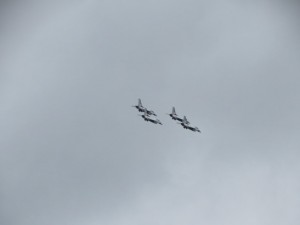 Georgia and I made a fairly quick trip through then went outside to enjoy the nice day. It turned out that the US Air Force Thunderbirds were doing an airshow at Elmendorf Air Force Base that day. The jets were making turns over the city and I was able to snap a couple pictures.

Rob picked us up in the early evening and took us to the Anchorage Marriott for our second night. Georgia and I had dinner at the hotel and turned in early. The next day we would be making an early start for Denali.