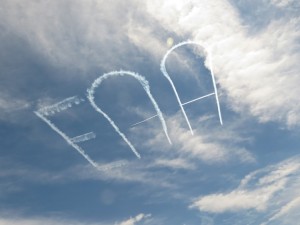 This was the first time that Georgia and I planned to spend the whole week at AirVenture and the first time we would take a trailer there to live in for that week. We hitched up Sunday morning and made the three hour drive to Sleepy Hollow Farm Campground in Oshkosh, Wisconsin.

There are a few options for camping during the event. Camp Scholler is the EAA campground and will accommodate as many RV and tents as want to come. While there are a very few water and electric sites, they are hard to get. The vast majority of sites are boondocking spaces. We didn’t want to do that this first time.

Those who fly-in can pitch a tent under the wing of their airplane and thousands do just that. Since we were bringing our travel trailer, that wasn’t an option for us. 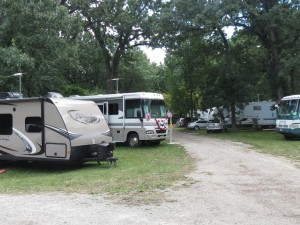 The third option, and the one we chose, is to camp in a private campground or on private property in the area. We picked Sleepy Hollow Farm since it is the closest to the main gate. In fact, Sleepy Hollow is surrounded on three sides by Camp Scholler. We had a water and electric site that worked out great for us. The spaces here are tight and the park was full to the max. The first site we were given was too small for our trailer but the staff was quick to find us another one and we got in there without much trouble.

Once parked and hooked up, we went over to the AirVenture grounds to trade our online tickets for wrist bands and look around the still quit show grounds. Then we drove to Friar Tuck’s for dinner before returning to the trailer to get settled in. 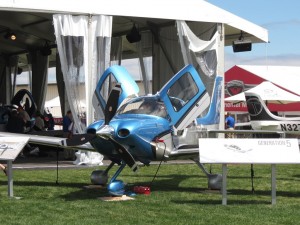 Monday was the official opening day for AirVenture 2013. I started out the day by walking over to the forum area (about a 10 minute walk) for an 8:30 AM  “iPads in the Cockpit” forum. I learned a lot about what to look for when selecting aviation apps. After that, I walked through some of the aircraft exhibits and got back to the campground in time for lunch.

Sleepy Hollow offers a free golf cart ride to the show grounds so Georgia and I used that to go back over for the afternoon and evening. We went through one of the exhibit hangers then setup our lawn chairs for the first of the daily airshows. 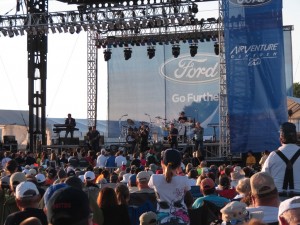 After the airshow we moved our chairs over to the main stage area and closed out the day with the Chicago opening night concert. 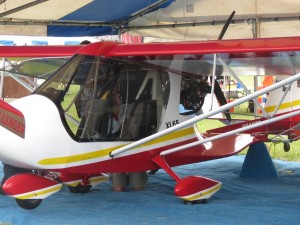 Georgia joined me on the grounds later that morning and we spent some time in one of the exhibit hangers before getting lunch. 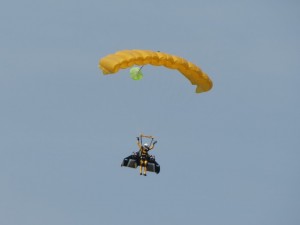 The highlight of the afternoon airshow was the first public U.S. flight of Yves Rossy, the “Jet Man.” He flies pretty high so there were times when I found it hard to follow him. It is amazing that he can maintain altitude and even climb with just a small set of wings and four tiny jet engines strapped to his body. 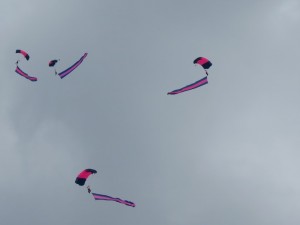 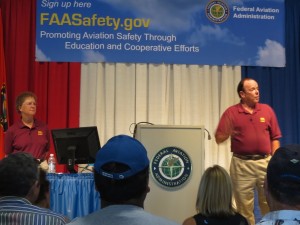 Wednesday was another early day as I began with an “Getting Started in Ultralights” forum. Georgia was off on her own doing some shopping but we met up at the trailer for lunch. Then I went back to see John and Martha King give a very entertaining “Risk Management” presentation.

We were going to skip the afternoon airshow but go to the first night show of the week. Since we would be leaving after the campground shuttle stopped running for the night, Georgia brought the truck over to the parking lot in the early afternoon.

We walked through the fly market and visited other exhibits. As we were passing close to the flight line, we heard the PA announcers reporting that a line of thunderstorms was approaching Oshkosh and asked everyone to take cover. The rest of the afternoon airshow was cancelled.

Georgia and I went into the EAA merchandise building, which quickly filled up, and stayed there for the next hour or so. As it turned out, the storms missed the airport and all we got were some gusty winds and a couple light rain showers.That would be the only rain of the whole week. Once the rain stopped, we ventured out to get dinner and setup our chairs for the night show. 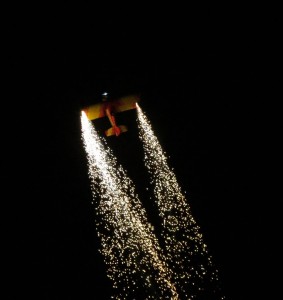 After the show, we followed the huge crowd through the dark to the parking lot and the truck. It turned out that parking had been a mistake. As we left the lot, a left turn would have put us a few hundred feet from the campground entrance.  The problem was, we couldn’t turn left. The Oshkosh police had the roads all one way going out. We followed the traffic, getting further and further from Sleepy Hollow. We finally stopped by one officer directing traffic and asked him how we could get back. He told us he couldn’t let anyone through. We had to go several miles south then follow back roads to get headed north on the one way roads and back to the trailer. What would have been a less than ten minute walk turned into a forty minute drive. That was the last time we took the truck.