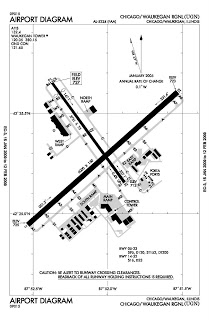 We finally got a decent flying day yesterday and made another flight in the Cutlass.  It was cold but the skies were clear and the winds light.

This flight was pretty much a repeat of the first complex session.  I did more climbs and descents to practice setting up the power, propeller, mixture and cowl flaps.  Those are the four things that have to be managed at every configuration change.  Pete also had me do some transitions to approach configuration which includes the four items listed plus managing the landing gear, flaps and carb heat.  I felt more comfortable with the added workload this time.  Not as rushed as I was on the first flight.

A new task for this flight was very slow flight in landing configuration with the stall horn blaring.  After a few minutes of that, Pete had me pull the power back and bring the nose up into a stall.  Recovery is pretty much what I am used to except remembering to set the carb heat off and to push the power in more gradually than I would in a fixed pitch airplane.  After the air work, we headed back to the airport for some landings.

Runway 32 was in use and I hadn’t landed on it in a long time.  This is Waukegan’s shorter runway at 3700 feet.  I remember back to my private training when I would use the whole runway and need brakes to make the turn off at the end.  Yesterday, I was only using the first half and making the turn off at the mid point (C2 in the picture) with no effort.  Strange how what used to seem like a short runway now seems so long.

We did four landings with two good and the other two just fair.  I ballooned a little on both of those.  I need more practice handling the extra speed of the Cutlass I guess.

From now on, we will be concentrating more on the pattern work to get those 25 landings and 5 go-arounds the insurance company requires done.