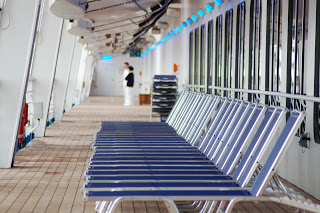 The only sea day of this cruise gave us a chance to rest and spend some time exploring more of the ship. We also attended the cruise director’s debarkation talk which, sadly, means the trip is nearing its end.

Tonight was the second and last formal night in the dining room and, as it turned out, our last time eating there.

We had booked our longest tour of the cruise for today so we had to be in the lounge even before the ship docked at the port of Naples. We were going to visit the Amalfi Coast and the towns of Sorrento, Positano and Amalfi – a nine and a half hour motor coach trip. Our guide for the day was Guilia and the driver, who had to navigate the narrow and winding coast road, was Genaro. 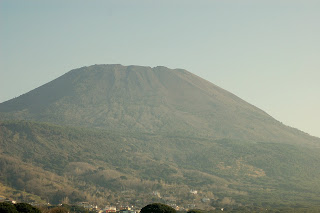 As we left the port behind, we passed close to Mount Vesuvius and got glimpses of the destroyed cities of Herculaneum and Pompeii. Soon we were on the coast where the spectacular views kept us looking from side to side to take it all in. Spring, with the flowers in bloom, is a wonderful time to make this drive. The hillsides are covered with terraced gardens and fields of lemon, orange and olive trees.

We made a couple photo stops at scenic overlooks before our early lunch stop at Sorrento. The meal was typical Italian style with three courses and wine. Shopping time was provided for those interested.

Back on the road, we passed through the small villages and towns hugging the shore line. The coastal road was not built for motor coaches and some of the encounters with other vehicles were quit entertaining to watch. We also made more photo stops at some of the most beautiful spots anywhere in the world.

Amalfi was our next real chance to get off the bus for a while. Georgia and I got a drink of lemon juice and a gelato at an outdoor cafe near the ocean then poked through the small shops until it was time to get back on the bus for the trip back to Naples and the ship. Our tour was the last one back and, I believe, we were the last two people to board the ship before it sailed for our final night at sea.

We decided to skip dinner in the dining room tonight but went up on the Lido deck to eat instead. Then back to the cabin to pack and get our luggage outside the door by 10:00PM. Porters would collect it during the night and we would meet up with it on the dock at Civitavecchia the next day.

The ship docked at Civitavecchia at 3:30 in the morning and passengers started debarking about 6:00AM. We had an early breakfast and then waited in our cabin until time to get off the ship. We were spending two extra nights in Rome so, when we got onto the dock, we just identified our suitcases and then handed them back to the porters for transport to our hotel room.

The bus ride into the city of Rome was supposed to take two hours but ended up being closer to four because of very heavy traffic. We had no schedule to meet so just enjoyed the view out the windows. 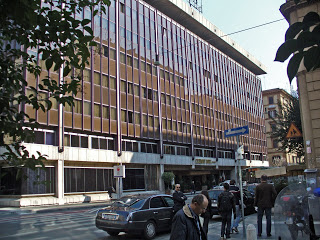 Our room at the Hotel Cicerone was very European and comfortable. We settled in, got our luggage brought up, found the Carnival rep to arrange for a car and driver for a tour of the city the next day and then went out looking for a pizzeria for lunch. We ended up at Pizzeria San Marco and enjoyed it very much; so much so that we returned for dinner on our second night. After lunch we looked around a little, found an ATM to get Euros to pay our driver the next day (they don’t accept credit cards), and just enjoyed the afternoon.

Right after checking in, we had called the hotel restaurant to make reservations for dinner so we got dressed and went down at 7:00PM. Le Bouchon is a little on the pricey side but, it was convenient and the food and service were excellent.

We slept in this morning but made it down stairs before the included breakfast ended at 10:00AM. Then we had a couple hours to explore the neighborhood before our driver Marco picked us up for a tour of the city. He asked what we wanted to see but we just told him to show us as much as he could in three hours. He did a very good job of cramming a lot of sight seeing into that time. The big advantage of a car over the bus tours is that the car can go places the buses can’t. We were able stop very close to the sights which saved a lot of time we would otherwise have had to spend walking. 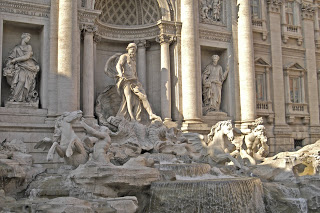 We saw all the usual attractions like St. Peter’s, the Vatican Museum, the Coliseum, Roman Forum, Palatine Hill, Circus Maximus and Trevi Fountain. We saw the top of the Spanish Steps but were not able to get to the bottom for the classic view of the steps. Police were stopping cars and directing them away from the area around the bottom. We didn’t get an answer about why.

The car also took us to some points where we 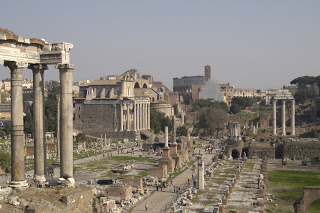 could get panoramic views of many of the buildings we had seen up close. I recommend this way of seeing the city. The cost ended up being higher that a bus tour would have been but, not by a lot. If we could have teamed up with another couple, it would have actually been cheaper because the price of the car is the same for four people as it is for two. Unfortunately, the people we arrived at with either had flights out on the second day or had already made other plans.

Back at the hotel, we went to the room to drop off the stuff we had with us in the car and the souvenirs we bought during the day. Georgia also took the time to call both British Airways, who would fly us to London, and American Airlines to arrange for wheelchairs at Rome’s Leonardo da Vinci – FiumicinoAirport and at London Heathrow. Then we went back to San Marco Restaurant for dinner.

Our flight was scheduled to leave Rome at 12:15PM so, Carnival had a car at the hotel to pick us up at 8:45. Rome traffic can make the trip to the airport a long one but, our driver did a good job and got us there with time to spare.

After we checked in for our flight, an assistant met us with Georgia’s wheelchair and helped us get through security and to the gate. This flight was almost on time so it looked like we would have plenty of time to change terminals at Heathrow.

On landing in London, a wheelchair was waiting at the arrival gate. Again, the aide sped our way through security and onto a shuttle bus for the ride to the international terminal. There, we were handed over to another aide and finally to a “buggy” driver who drove us to the gate in his golf cart. Arranging for the wheelchairs had been a good move and we appreciated all the help.

As our Chicago flight was taxiing out, the captain made his welcome announcement and gave the current time in Chicago. I set my watch to the time he said and that matched the time on the flight progress display on the cabin screen. All through the flight, the display showed our arrival time in Chicago as 7:15PM so; we thought we were right on time. However, just before we landed, the captain again came on. This time he said the local time was 8:15 PM and apologized for the late arrival, blaming it on strong headwinds. I could hear people around me questioning the time. The cabin display still showed 7:15. For some reason, the display had not been corrected for daylight savings time and, no one from the flight crew had ever said anything about the time being wrong. It wasn’t a big deal for us since we were home now but, most of the others on the plane had connecting flights. After we parked, a gate attended boarded the plane and announced that anyone with a connecting flight at 9:30PM or before had been re-booked for the next day. Glad it wasn’t us this time. We got out luggage (all of it), went through customs without an inspection and called a cab to take us home.

It was a great trip despite the airline snafus. Now we have to figure out what our next adventure will be.