​I took ​my DJI Mavic Air out for a test flight today to see how it handled the cold weather. It wasn't extreme cold but it was below freezing ​at the time. Not only was it cold but the wind was strong too. UAVForecast was reporting winds of 17 mph gusting to 24 mph at 250 feet. Judging by how it felt on the ground, I think ​the gusts were even stronger than that. I had the high wind warning on the screen for the whole flight.

​For this test I used the Litchi App to set up a series of waypoints that just went up and down the street in front of the house a few times and then flew around in rough circles for the last part of the mission to keep the drone close in case of trouble. I used 275 feet for the altitude. Litchi estimated the mission length at 12 minutes and the Mavic ​would be recording video the whole time.

​Preparing For The Cold

​Before I went outside, I powered up the remote and the drone to check for any updated from DJI. There was no point in doing that out in the cold. There were no​ updates but I did get a compass calibration warning. I would have to do that outside.

I put extra batteries in my shirt pockets ​to keep them warm under my coat. 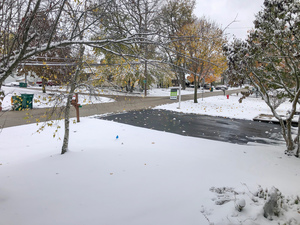 The ​driveway was still wet from Halloween snow we had yesterday so I found a cardboard box to put the drone on and keep it out of any pu​ddles.

​Just before stepping out the door, I opened the Litchi App, connected my phone to the remote and powered it back on so I would be ready to go.

​As soon as I stepped outside, the lens on the Mavic Air fogged up from the temperture change. While that cleared, I fired ​up the drone and calibrated the compass

​I set my cardboard box in the driveway and ​​put the drone on top of it. Right away, the wind gusts started pushing the box ​across the drive. I got a couple paint cans from the garage to weight it down and keep it in place. 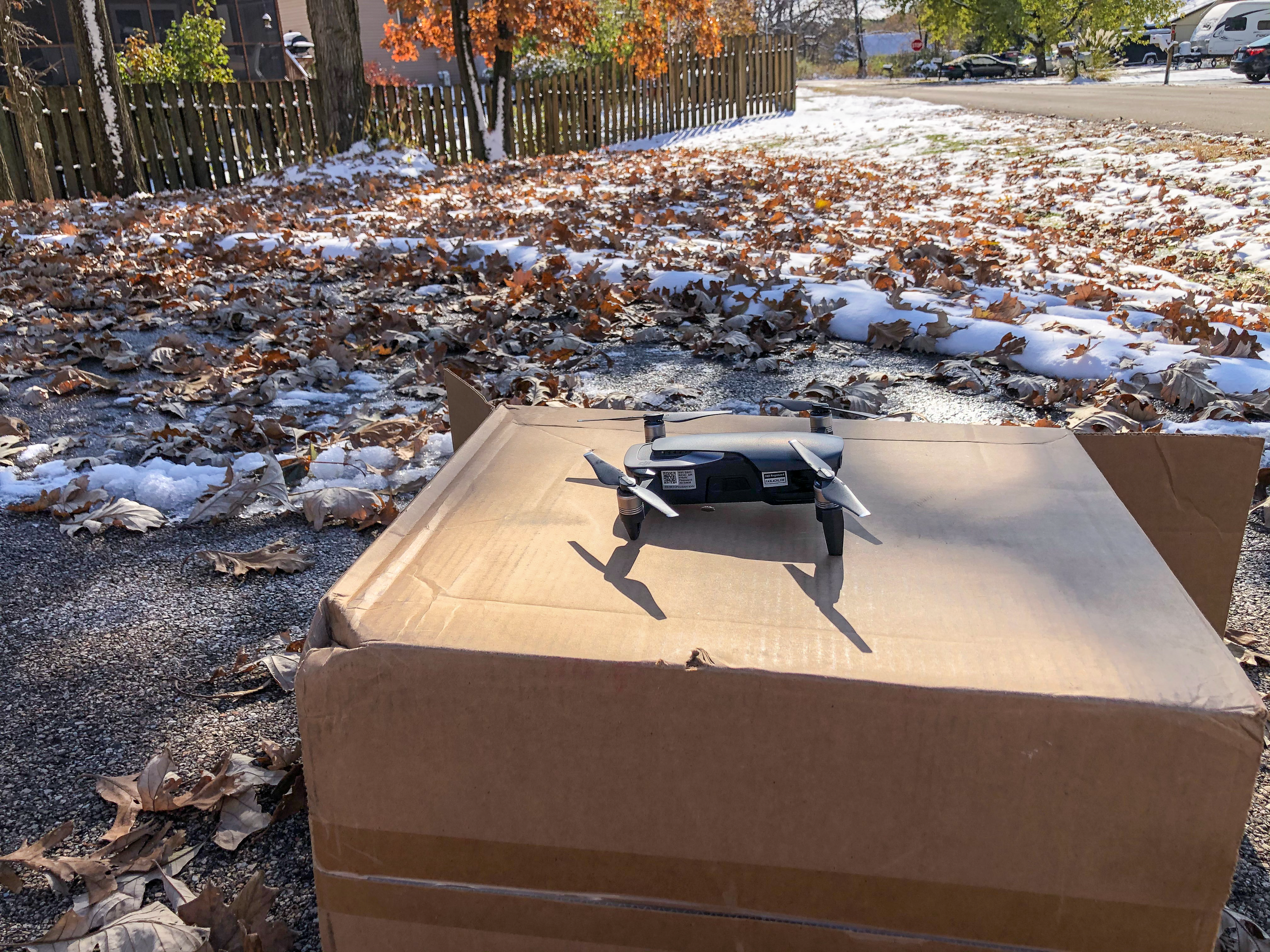 With my launch pad steady, I took off, let it hover for a minute while I checked the controls​, climbed above the trees and started the Litchi mission.

I was very impressed at how well the Mavic Air handled the wind. It would ​move a little when a gust hit but the video stayed steady and the drone completed it's mission without a hitch.

The actual flight time ended up being just over 10 minutes which was a couple minutes less than Litchi estimated.

I used Return To Home to land but it did have a little trouble. The Mavic came down over the box but was moving side to side with the gusts and didn't want to come all the way down. I ended up taking over and landing it manually.

​With a few common sense precautions, the Mavic Air can handle cold weather just fine. It is also amazingly stable in the wind although the Litchi App auto-land did struggle a little with that.

Battery temperature during flight doesn't seem to be an issue. The battery felt warm after landing​. and I didn't see any unusual decrease in ​battery power during flight. I will see what happens in more serious cold.

I had a couple more distant missions planned ​for flying out over the lake and back but I chickened out because of the wind. I really didn't want to dunk my drone today!

Now that winter is here, I am glad I would have to give up flying just because it gets cold outside.