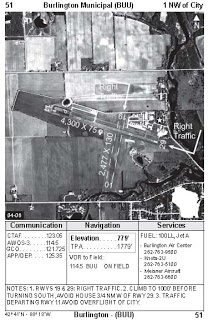 We had planned a dual session to work on crosswinds so, naturally, the winds were very light all day yesterday. As a plan B, we decided to go to Burlington for some soft and short field practice. I haven’t done maximum performance landings for months. Since BUU has both turf and hard surfaced runways, it was a good place to work on them.

We approached the field from the south east so, I stayed south of the airport and well above pattern altitude until I could enter the right downwind for 19 from the west side. That first landing on the grass was far from “soft.” I was too fast on the approach and never got slowed enough to make a nice gentle touchdown.

I kept moving and back taxied for a takeoff from the turf. The takeoffs went fine and, each of the next two landings was an improvement over the one before. My speed control on final was good on both. I never did get my flare as high as it should of been but, they were better.

Next, we switched to paved runway 29 for some short field takeoffs and landings. Again, the takeoffs were fine but, my landings were a little flat and fast. I need to concentrate on that flare. After three of of these, we exited the pattern to fly back to Waukegan.

As we climbed out of Burlington, we noticed that the ceiling was lower than it was when we arrived. I had been at 3200 feet on the way out but, I could only get to 3000 on the way back. It looked like there might be some rain showers along the Lake Michigan shoreline at, that turned out to be the case. My landing at Waukegan was in a light rain but, it stopped as we pulled into our parking space.