Lesson 73 – An Almost Solo and Crosswinds 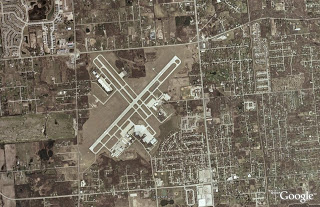 While Sunday’s session was an almost flight, yesterday’s lesson was an almost solo. There were a few rain showers around but ceilings were forecast to be 4000 feet or higher and winds were supposed to be light. Sandy didn’t want me to go out to the practice area but cleared me to solo in the pattern.

I got the key and went out to preflight the airplane. I found a rubbed spot on a tire that I thought was questionable so, I asked Sandy to take a look. While we were inspecting the tire, it started to rain a little and the wind seemed to be picking up. We listened to the new ATIS which was reporting a ceiling of 1700 broken (well below my solo limit) and wind gusts to 16 knots (just barely over my limit). Plan B was do do a dual session to work on crosswind landings.

The wind was from 040 so, we started out on runway 5. With the wind so closely aligned with the runway, the crosswind component was small. I was holding my correction OK on final but, I was rolling level just before touchdown. Sandy’s fix for that was to switch to runway 32. This was more of a direct crosswind and it quickly became obvious to me that I had to keep making corrections all the way through the touchdown and roll out. The gusts were bouncing us around more on this runway but, each of the five landings I did was an improvement over the one before.

With the low ceiling, the tower controller was busy with IFR traffic taking off and landing on runway 5. He had to keep switching our patterns from left to right and back. I’m sure he was happy to see us go when we finally asked to taxi back to parking.

It was a real work out for me but a good lesson in gusty crosswinds.