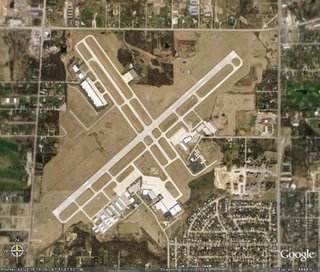 I had my first lesson at Waukegan Wings last Thursday. I think that it went very well. Making the change feels like the right decision.

Sandy, who will be my lead CFI, took care of the paperwork to get me enrolled in the private pilot training program and then we spent some time going over the syllabus and talking about how my training would proceed. On a previous visit, I met with the general manager and we set some specific dates for when I could expect to complete each phase of the training. Now I have a clear picture of what I need to accomplish to achieve each of those goal dates. With the paper work done, Sandy gave me a rundown on what we would be doing during this lesson and we headed out to the airplane.

I flew in a C152 during my training in 1989 but this was my first experience with the Skyhawk. We did a thorough preflight, pre-start check and run-up then were off to runway 23. Sandy handled all the radio calls while I tried to pay as much attention as I could. The taxiing went OK. I don’t think I did as well as I did the last time in the Warrior so I will blame the weaving on getting used to a new airplane and to trying to hold the controls in the correct position for the wind. Right from the start, Sandy put emphasis on knowing which way the wind was blowing and what that meant to what we were doing. She continued that all through the lesson but, I admit, it usually took me a little time to figure out just where it was coming from. I’m glad she is teaching this right from day one because it is one of those things I wondered if I would ever grasp. Now, I know that I can figure it out and I’m confident that it will get more natural with time.

I had a little trouble staying straight on the takeoff roll but it wasn’t horrible. I had more trouble getting to and holding a constant speed after liftoff. I was a little fast all through the climb out. I should have been at 79 knots but I was consistently just under 85. I need to work on keeping the nose in the right position. I am also still not sure what I should be doing to stay on the runway center line. But, I expect that to click very soon so it is not really a concern.

Now, I know for a fact that Sandy had not read this blog before our lesson but, she had me working on the very things that I have posted as concerns. I guess she must be good enough to quickly assess what her students need help with. We did a lot of work on trimming. Sandy would let me fiddle with the trim until I thought I had it right then she would show me what small correction I needed. She also had me look out the side window while she got us out of trim then had me get it back to where it should be. I have a much better feel for how a trimmed aircraft it is supposed to feel now. I just have to practice to get better at it. Having the airplane trimmed helped a lot with my tenseness too. I was much more relaxed on the controls – most of the time.

The other main focus of this lesson was to maintain straight and level flight and execute turns, climbs and descents while looking outside the airplane. After a few medium turns in each direction, Sandy covered the attitude indicator and had me do them totally by outside reference. For the most part, that went well. I still have some problem with altitude control so I will have to work on that part of it.

As we flew back to Waukegan, Sandy pointed out the prominent land marks that would help me find my way. I followed through on the controls while she flew the pattern and landed. She helped me with the rudder pedals as we taxied to the ramp and parked. We secured the airplane then went inside for a debrief and a look at what is coming up in the next lesson, which is scheduled for Tuesday. I have homework to do before then.