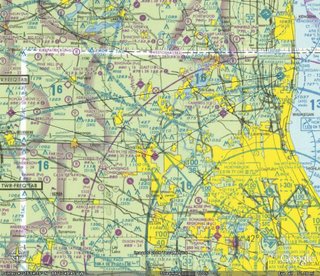 The goal for this lesson was to use pilotage to fly to Poplar Grove, from there to Lake in the Hills and then back to Waukegan. The distance didn’t qualify as an official cross country flight, but it was a very good introduction to what travel by airplane is all about. My basic task was to follow along on the sectional chart and to know where I was, in relation to landmarks on the ground, at all times. In fact, the real challenge was doing that navigation while also keeping the airplane straight and level and looking for traffic at the same time.

Taking off from Waukegan, the visibility was pretty good but, as we got away from Lake Michigan, the haze got thicker until we were down to less than 4 miles visibility. That added to the difficulty of seeing landmarks and made this a realistic training exercise. I did a good job of navigating to C77 but had some difficulty actually finding the airport. I know that Sandy spotted it well before I did.

We landed on turf runway 9 at Poplar Grove so I could get a little more soft field experience. My first approach was too high and I had to go around. The second time was a better approach and proper speed but touchdown still just a little too firm to be a good soft field landing. We taxied to the hard surfaced runway and took off on 12 which was a pretty good heading for Lake In The Hills.

This was a short leg and, again, I had no trouble along the way. As at Poplar Grove, I didn’t actually see the airport until we were almost on top of it. I still surprises me that something as big as an airport is so hard to see from the air. Maybe it would help me if all runways were painted blaze orange.

We didn’t land at 3CK, just overflew the airport and then turned for home. The first half of this leg was the only part of the trip that gave me any real trouble with the navigation. I switched to the Chicago VFR terminal area chart which has a larger scale than the sectional. The difference threw me off enough that I thought we were much further from landmarks than we actually were. It was only a minor problem though and, since we were so close to Waukegan, I knew the area from earlier training flight and found the airport fairly easily.

I am developing a fondness for little airports. I look forward to the time when I can spend some time on the ground to see more of them. Each one seems to have it’s own unique character that makes me want to learn more about it.