Saturday morning we had breakfast at the hotel then got back in the car for more driving. The plan was to drive up the eastern (Lake Michigan) side of the peninsula all the way to the tip then come back down the Green Bay side arriving in Fish Creek about 5 PM. We had reservations for a fish boil at 5:45 but wanted to get there early enough to watch the preparations. 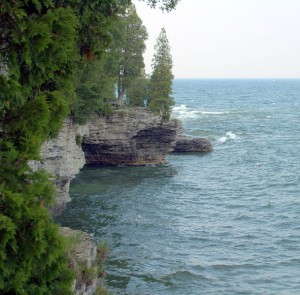 Our first stop of the day was at Cave Point County Park. Besides seeing and hearing the water rushing into the caves, it is a very pleasant place to enjoy the scenery. This side of the peninsula is less traveled and less populated than the western side and is sometimes referred to as the “quiet side.” The shoreline here is rocky and really quite spectacular. 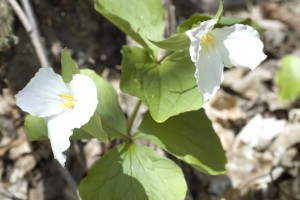 As we were leaving the park we saw a patch of trillium blooming beside the road. We decided to find a place where we could pull off the road and get some pictures of the flowers. That turned out to be a bigger challenge than expected. We saw flowers where there was no place to stop and, when we could pull off the road, found no flowers. Finally we located both parking spot and trillium plants at a wildlife viewing area and there we got our pictures. Besides the trillium and other wild flowers, the famous Door County cherry and apple trees were also in full bloom on this late spring weekend.

After our flower hunt, we got back on track and made our next stop at the Jacksonport Maifest. Georgia made good use of her TravelScoot as she made her way among the arts and crafts tents. I got my exercise just keeping up to her. We did a lot of looking but no buying. We did stop to shop in Bailey’s Harbor though.  The Novel Ideas bookstore caught our eye and we had to stop. We both like bookstores and this is a very nice little shop. 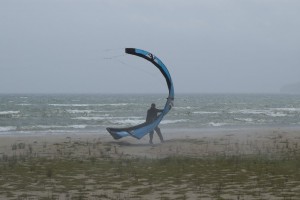 On the edge of Bailey’s Harbor we found a town park with a small beach and scenic shoreline. It was still much too early in the year to swim in Lake Michigan but, some kite surfers where taking advantage of the strong breeze so we stayed for a little while to watch them. 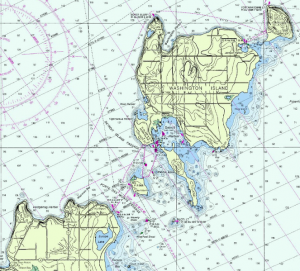 It was getting close to midday so we decided to drive straight through to the end of the road and get some lunch at the tip of the Door County peninsula. Northport is a very small town that is the terminal for the car ferry to Washington Island. Unfortunately, there was no place to eat at the ferry dock. So, we made the short drive back to Gills Rock where there is a passenger ferry over to Washington Island. We ate at Shoreline Restaurant which has a view of the harbor and the passage between the peninsula and island that the French explorers called Porte des Morts (Death’s Door) giving  Door County it’s name.  Lunch there was very good.

We were now headed back south along the busier Green Bay side. The rest of the afternoon was devoted to shopping in Sister Bay and Fish Creek. The streets in both towns are lined with an eclectic collection of small shops. Just before 5 pm we pulled into the parking lot of the White Gull Inn and the end of Main Street in Fish Creek, where we would have our fish boil dinner. We entered the inn and were greeted by a hostess who showed us to our table then invited us to join the other early arrivers on the patio to watch the boil. 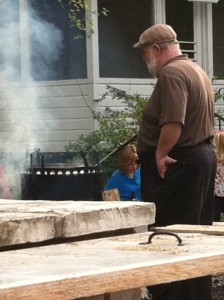 At the edge of the patio is a fire pit in the middle of which was a large kettle of water over an open fire. From time to time the “boil master” would add wood to the fire and check the water. When it got up to a good rolling boil, he put a long handled basket into the kettle then dumped in two large baskets of red potatoes and about a 2 pound “pinch” of salt. As the potatoes boiled, Georgia indulged in a glass of wine and I had a beer. The group of guests grew until the patio was full. 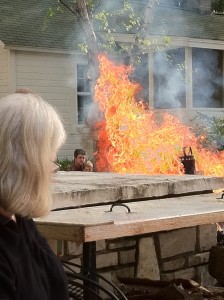 Now, the boil master added a second basket on top of the potatoes and dumped a tub of whitefish pieces into it. On top of that went another large scoop of salt. The salt is not to season the food but to raise the specific gravity of the water so that the oil and grease from the fish rises to the top. Very quickly, the fish was cooked and the boiler told us to get our cameras ready and watch closely. He threw a can full of kerosine on the fire which blazed up high above the kettle. The sudden intense heat caused the water in the kettle to boil over carrying the grease with it into the fire.

When the flames burned down, the boil master and his assistant lifted both baskets out of the kettle and led the guests back into the dining room. There we formed a line and were each handed a plate of potatoes and fish which we carried to our tables where coleslaw and bread had already been placed. Our waitress came to take our drink orders and showed us how to easily debone the whitefish. Boiled fish might not seem like a treat but it really is very good when cooked this way. When the waitress offered us seconds I had to have a little more. Desert was Door County cherry pie ala mode.

The full day of exploring left us tired so, after dinner, we were satisfied to drive back to Sturgeon Bay and to our hotel room.