Another day of classes for Georgia and another day to enjoy the ship for me. This was our last full day aboard. The seas were a little rougher and the ship was moving more in the morning but, it got calmer as the day went on. I took a lot of photos then spend a couple hours out on the deck. Once Georgia was done with her sessions, the group posed for photos while we husbands took them. Then Georgia and I went to the ship’s photo area to pick up the last of our pictures and the cruise video I had ordered a couple days before. Then to our cabin to get started with packing. Our suitcases would have to be out in the hallway later before midnight.

Later, we joined the cruise organizer for hamburgers and milk shakes at Johnny Rockets, the 50’s style diner. The classes and shore excursions had made for some hectic days. It was nice to have some quiet time to get better acquainted. After dinner, we said our good byes then took a last walk down the Royal Promenade before going back to the cabin to finish packing and get the suitcases out in the hall. We watched the farewell parade from our bay window then turned in for our last night at sea.

We didn’t have a flight home on debarkation day so, we were in one of the last groups scheduled to get off the ship. We had a leisurely breakfast in the Windjammer Cafe and hung out there until just before 9:30. Then we made our way down to deck 3 to wait for the blue tag group to be called. Once off the ship, we waited in a long line for immigration. Then we collected our luggage and found a porter who waited with us in another long line to get through customs.

Finally through the terminal, we got a cab to take us to Enterprise where we picked up our rental car. I brought our Garmin C580 GPS on the trip so I got it out, set it on the dash and entered the name of our hotel. Suddenly, we knew right where we were going. GPS is an amazing tool for finding your way around strange cities. If you have one, you should take it with you when you travel. We like the friction mount which makes it very easy to move the unit from car to car as well as to move it to the floor when stopped to keep it out of sight of potential thieves.

We had planned on taking a boat tour this first afternoon but, it started raining as we left the rental lot so, we went straight to the hotel instead. The rain got heavier as we drove and we were in a full blown thunderstorm by the time we got to the Pelican Grand Beach Resort. We were earlier than we had expected to be and our room wasn’t ready yet. To pass the time, we had lunch in the bar then found chairs on the veranda where we could watch the lightning out over the Atlantic. It wasn’t long before our room was ready. 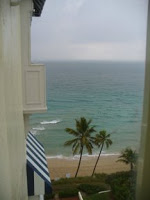 The room was very nice with wrap around windows that offered views of the beach and ocean as well as the city of Fort Lauderdale. Unfortunately, because of the rain and our other plans, we never did get to take advantage of that beach. That first rainy night, we just drove a few blocks to California Pizza Kitchen for dinner. When we got back in the car, the radio was announcing that a tornado warning was just ending. Apparently, a tornado had been sighted, not too far away, while we were in the restaurant. We went back to the hotel to stay in for the rest of the evening.

We booked a tour of the Everglades, Miami, and Biscayne Bay for today and were to meet the tour group in Miami at 10:15 AM. The GPS got us to our meeting point and we parked the car at Bayside Marketplace.

The first part of the tour took us to Gator Park just outside the city on the Tamiami Trail. Here we took an airboat ride, watched an alligator show and had lunch. This is a typical tourist spot but, the airboat ride was good. We saw alligators, turtles and birds up close. They must feed them well to keep them around. The visit to the park was much more fun than I had expected.

From here, we were taken back to Miami where we got on another bus for the city tour. This one took us through Little Havana, South Beach, Coral Cables and Coconut Grove. We ended up back at Bayside Market, where we had parked the car. The last part of our tour left from here and was a boat trip around Biscayne Bay. This was mostly, a look at the mansions along the shore and on the islands. Then it was to the car for the drive back to Fort Lauderdale and the hotel.

It was raining again on our last morning in Florida. We slept in a little then checked out of the hotel and went for lunch. After turning in the rental car, we took a cab to the airport where, no surprise, the flight home was three hours late. The night was so clear that we could see the lights from 100 miles around as we flew back to Chicago. Our landing path to O’Hare took us out over Lake Michigan where we got a good view of Navy Pier and the Loop. Our flight touched down about 10:20 PM and, by the time we got our luggage, called a cab and got back home, it was well after midnight. We were ready for some sleep.