42 RVs owned by members of the Camping World of Chicago Owners Club, plus another 4 occupied by Camping World staff, descended on the Wagon Trail Campground in Ellison Bay, Wisconsin for their 2013 Door County rally. The 22cd annual event was held from August 21-25 and Georgia and I attended for the first time.

Many of the attendees arrived earlier in the week  but, because I still have to work, we left Wednesday morning for the five hour drive north. We had loaded the trailer and the truck on Tuesday so all we had to do was hitch up and go. After a short lunch stop, we pulled into the campground just after 1:30 PM. 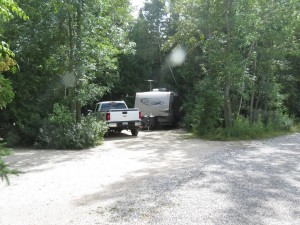 Wagon Trail has very large campsites that are screened from each other by trees, giving them a nice sense of privacy. Ours was just steps from the tent Camping World had set up for the club activities. I backed into the space and we got setup in time for the first scheduled event – a social hour to get acquainted with our fellow club members. Since this was our first time attending we didn’t know anyone. We quickly learned the group is very accepting of new members and they made us feel welcome right from the start.

At 4 PM, we played bingo for RV prizes. Camping World supplied enough prizes to make sure that each couple won one of them. Georgia and I were one of the last winners but we did finally win a picnic table cloth with weights to hold it on the table and a citronella candle.

A campfire and entertainment were scheduled for later in the evening but the weather was starting to look threatening and our hosts let us know that that event would be rescheduled for the next night. Dinner was on our own so we grilled steaks at our camp site. The steaks finished just as the first rain drops fell forcing us to retreat to the inside of the trailer to eat.

We had the weather radio on and by 7 PM we were hearing warning for severe thunder storms with hail, heavy rain and wind gust to over 70 MPH. The warnings specifically mentioned damage to trees and mobile homes – not what you want to hear when you are living in a travel trailer under large trees!

At about 8 PM the campground’s sirens started wailing so we jumped in the truck and drove over to the office where most of the campers were gathering in the rec hall. Having a solid building around us was comforting. Many of us were watching the radar on tablets or smart phones and we saw the darkest radar returns pass
just to our north out over Lake Michigan. We got a lot of lightning, very heavy rain and some strong winds but it was not as bad as it could have been. To everyone’s relief, all the RVs survived unscathed. We did find that the slide out leak we thought had been fixed was not and we had water on our floor again. More about that later. 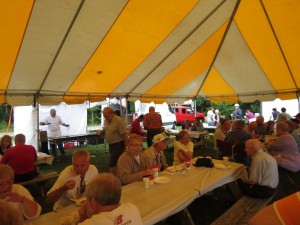 By Thursday morning, the skies were bright blue and they would stay that way for the rest of the week. We were up in time to walk across the road for pancake breakfast at the group tent. The pancakes and sausage were very good and we got to meet more of our fellow club members.

Breakfast was followed by the annual club meeting which included announcements about the upcoming events and introductions as each couple rose to introduce themselves and tell us abut the RV experience and interests. Last was a chance to sign up for optional activities so we got in line to be one of the first to sign up for a technician visit so we could get that leak looked at again. 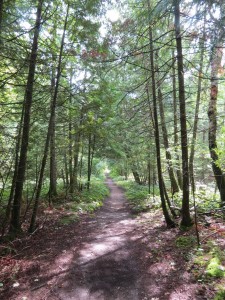 I decided to take a walk and followed the trail through the woods that ended up at Rowley Bay Resort and the Lake Michigan shoreline.I spent some time taking pictures before walking back to the trailer for lunch.

We relaxed at our campsite until we went back to the tent for the ice cream social at 2 PM. While we were eating our Door County ice cream, we looked online for restaurants that had fish boils on Thursday night. There are many places that do boils but many are Friday and Saturday only. We found Pelletier’s did boils every night and had good reviews so we made a reservation. 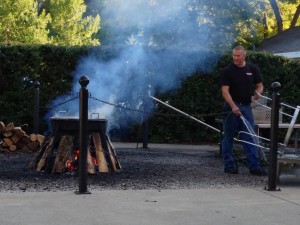 After the ice cream, we left the campground and drove south along the peninsula with some shopping stops along the way. We ended up in Fish Creek in time for our 6 PM reservation and, since it was a very nice evening, found a table outside where we could watch the boil and eat without moving back into the restaurant. Pelletier’s was a good choice. The boil was fun and tasted very good.

After dinner, we went back to the campground where the bonfir,e that was washed out the night before, was just getting started. The entertainer who had been scheduled was not available but the Camping World crew was able to come up with a replacement in a guitar player and singer whose name I missed – sorry. He was good though.

Friday’s activities started with an RV discussion with Camping World sales and service personnel under the tent. I was surprised at how much useful information I picked up by listening to other rvers asking questions. It was well worth our time to attend this session.

We spent most of the rest of the day touring Door County as we drove south along the east side all the way to Sturgeon Bay and then back up the west side to the campground – with many stops in between. The drive took most of the day but,even then, we didn’t make it to the northern tip because we had to be back in time to get ready for dinner and dancing at Rowleys Bay Resort that night.

Since we were going to drive over to the resort, we could take two more people with us. We checked with the Camping World folks and they matched us up with another couple needing a ride. Just before 6 PM, we made the short drive to the resort.

The buffet dinner was very good with plenty of selections. The live music for dinner and dancing was pretty good and veryone seemed to have a fun time. We left fairly early and the party was still going strong.

Saturday morning we headed back to Fish Creek for breakfast at Al Johnsons Swedish Restaurant – the place with the goats on the roof. We had an hour wait to be seated but we can’t go to Door County without eating there at least once. The Swedish pancakes are great and it is just a fun place.

After breakfast we crossed over to the east side on the peninsula for a short visit to Cave Point County Park. That is another place we always try to visit when we are up there. The rocky shoreline is spectacular. We had other places to go so didn’t stay long.

From the park, we continued north all the way to Gill Rock and then on to the tip of the peninsula to complete our tour of the full length. We spend some time at the Washington Island Ferry dock and visited the gift shops there then stopped at the Shoreline Restaurant for two pieces of sawdust pie. We had to get back to the campground for our visit from the Camping World technician so we couldn’t spend as much time as we wanted to.

Tom, the master technician, arrived just after we got back and looked over our slideout for ideas about why it was still leaking. He did some caulking around the downspout where the slide meets the trailer wall in an attempt to block off any path the water might be taking. I think it might be fixed now but we will have to have it out in a heavy rain to be sure.

Sunday was a travel day for most of the attendees and we were up early prepping the trailer and truck for the drive home. We did walk over to the tent for a continental breakfast that was the final event on the schedule.

After breakfast, I stayed to help take down the tent and clean up the area while Georgia finished packing up 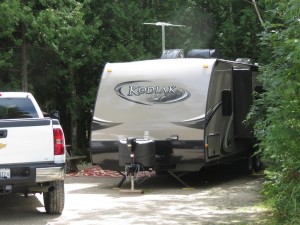 the inside of the trailer. Then we hitched up and started our long drive home.

This was a great rally and I hope we can do it again next year. Is possible we will make it a full week.