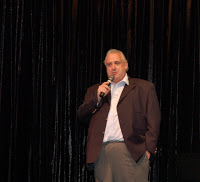 Our first full day on board the Splendor was a sea day. We used the morning to explore the ship and attended cruise director John Heald’s first port talk covering Copenhagen, Warnemünde and Helsinki. Lunch on the Lido deck was followed by more explorations and some quiet time on our balcony.

At dinner we met Steve and Judy and Steve and Dorothy, the other two couples sharing our table. Like Mike and Debbie the night before, we found we truly enjoyed their company. We didn’t miss a single dinner this whole cruise because we looked forward to our time sharing the days experiences with our table mates. Thank you all for making a wonderful cruise even better.

After dinner, we went to the night’s show in the Spectacular lounge. Then, before bed, we set our watches ahead one hour. This was the first of six time zone changes we would make during the trip. We would set the time ahead three times going out and set it back three times on the return leg.

There has been a settlement and harbor on the site of Copenhagen since Viking times. That town of Havn (harbor) grew to be the current capital city of Copenhagen (København in Danish).

We took a city and boat tour that gave us a good overview of the town. Our dinner companions, Steve and Judy, were also on this tour. The boat ride through the canals and harbor was especially nice. The view of the city from the water is a pleasant mix of the modern and ancient. The area of Nyhavn is a look at 17th century Copenhagen. Nyhavn means “new harbor” but, in this case, it was new in the 1670s.

The tour boat gets close to the Little Mermaid statue but, from the back side. This particular statue seems to hold the sad record of being the most vandalized monument in the world. Her head has been cut off (at least twice), her arms removed, she has been knocked off her base and repeatedly painted. Just about every protest in Copenhagen invites a new attack on the statue.

The city tour took us past the major landmarks of the city including Tivoli Gardens, Amalienborg Palace – where we stopped for the changing of the Royal Guard, Christiansborg Palace – home of the Danish Parliament, and much more.

Back on the ship, we shared our impressions of Copenhagen with our table mates then saw yet another show in the Spectacular lounge.

Warnemünde is a resort area that is, technically, a district of the city of Rostock, Germany. Formerly part of East Germany, the area is slowly making the transition from communism to a market economy. Before and during World War II, Rostock was home to the Heinkel aircraft company. That made the city a major target for Allied bombers during the war. After the war, the rebuilding that was done by the Soviet Union mainly consisted of ugly concrete factories and apartment buildings.

The soviet communal apartment buildings still stand but are being remodeled to look less stark. The interiors of most of the buildings have been converted to individual apartments from the old multifamily ones. Now, the exteriors are also undergoing change. Bright paint, stairways and balconies are making the old gray concrete a rare sight. Where unaltered buildings still exist, the contrast with the new look is stunning.

Our tour included the city of Rostock and some of the surrounding countryside of the state of Mecklenburg-Vorpommern. The drive down linden tree canopied roads was very pleasant. We made a photo stop at Bad Doberan Cathedral, parts of which date from the 14th century. From there, the tour continued through some of the newer areas of Rostock and back to the ship.

With it’s location on the Baltic Sea, tourism is one of the main industries of this region. It is popular with both German and foreign visitors. Warnemünde itself was bustling with temporary beer gardens and food vendors to meet the needs of the summer beach goers. As the ship sailed out of port about 11PM, there were still crowds of people along the shore to wave goodbye and toast our voyage.

Our second sea day was a good chance to relax after two days ashore and to rest up for the four shore days coming up. John Heald gave another port talk to cover the upcoming ports of Saint Petersburg and Tallinn. He always provided valuable information that made going ashore easier.

This was our first formal dinner night of the cruise. We got dressed a little early so we could get some photos taken before dinner. After dinner, we went to the production show in the Spectacular. Then to bed since we had an early tour in Helsinki the next morning.