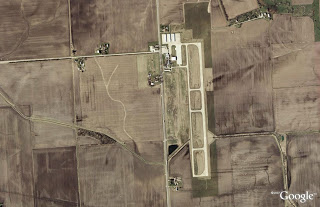 This was a dual flight to Morris, Illinois that was meant to get me back into the cross country phase of training. Overall, it went very well. I found all my checkpoints and the airport without much trouble.

We couldn’t go direct from Waukegan to C09 because that route would have taken us too close to O’Hare. Instead, we flew southwest at 3300 feet (to stay under the 3600 foot floor of the B airspace in that area) until we intercepted the route 47 VFR flyway depicted on the back of the Chicago terminal area chart. From there, we turned due south, climbed to 4500, flew past Aurora and on to Morris.

The runway at Morris is 18/36 and the wind was 270 at 11 knots. This made Sandy very happy since it would give me a direct cross wind. Another aircraft in the pattern was using 36 so that is the one we set up for. My first approach was too high so I did a go around. On the second one, I got down OK but did some weaving on the runway because I didn’t get the ailerons into the wind enough.

Sandy had another student scheduled after me so we made this a quick stop then got back in the air for the return trip. Again, the navigation was not a problem and we hit all the checkpoints. I had do another go around on the first approach back home because I was not lined up correctly. The second one was much better but, it is obvious that I need some cross wind practice after the layoff. Conditions permitting, we will work on that Sunday.