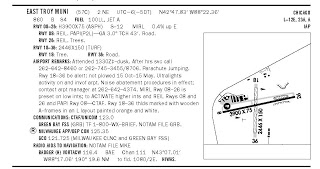 I had hoped to get my long cross country done yesterday but, strong winds and rain showers prevented that again. We decided to use the winds to get in some crosswind practice. Sandy chose East Troy as our destination because I hadn’t been there before. That would give me more pilotage practice on the way. I also asked Sandy to give me a simulated engine out because I haven’t done one in a while.

Our dual sessions are now aimed at getting me ready for the checkride so, we started out with a discussion of how the test will typically go and some specific things to expect and be ready for. One particular thing that Sandy mentioned is one that I am going to have to make a real effort to remember. I go through my FLOW checks when I am supposed to – usually – but, I have gotten sloppy about saying each item out loud and backing the checks up with a look at the appropriate checklist. I have to get back into the habit of telling the instructor (and soon the examiner) what I am checking and to say “checklist complete” when I have completed the checklist for each stage of the flight. I might seem like a small thing but, it is an important one.

The airplane was in the hanger so I got to do the preflight in comfort. Once we pulled it outside and got in though, I found that I couldn’t get my seatbelt to extend from it’s roller. Finally, one of the other CFIs got a screwdriver, took the plate off the rollers and got it unstuck. By now, we were over a half hour late getting started. No one was scheduled for the airplane after me so, we just extended our time a little.

The takeoff and trip to 57C went fine. I remembered my checklists and found the airport without much trouble. Sandy asked me where we were a few times and I always knew. I was pretty sure that I saw the airport while we were still well out but, I couldn’t see the runway so I doubted myself. I told Sandy I wasn’t going to descent to less than 500 feet above the traffic pattern altitude until I was sure. She approved of my decision. I stayed on the left hand pattern side of what I thought was the airport and, as we got a little closer, the runway came into view.

It was very windy and quit bumpy below 3000 feet. My entry into the pattern was more like 90 degrees that the proper 45 degrees because I didn’t get far enough upwind and ended up being blown toward the approach end of runway 26. I had to turn in more which caused the sharp angle. We were getting bounced around a lot on final and I ended up touching down before I was ready. I was off the centerline and put some side load on the mains. Fortunately, these little Cessnas can take the abuse we students give them.

We taxied back and I did two more landings and one go-around. This was the worst wind shear I have flown in so far. I had to make constant, and sometimes large, corrections from pattern altitude all the way down to the ground. None of my landings could be called good but, each one was a little better than the one before. I was an excellent learning experience.

Once we were clear of the airport area on the way home, Sandy pulled the power for the simulated engine out emergency I had asked for. We were right over the Bong Recreation Area with it’s wide open spaces so, I told her I was going to land there. The area alongside the old runway is a great emergency landing field. I got the speed down to best glide speed, went though my engine out checklist, tuned 121.5 on the radio and simulated an emergency call. I only made one turn over the end of the field before we were down to about 1200 feet above the ground so I flew a short downwind, a tight base and set up on final. I was high,which is good with no engine, so I put in a couple notches of flap. We came down to about 500 feet AGL before putting the power back in and climbing out. Sandy agreed that I had the field made and my procedures were good. Her only negative comment was that I had kept my speed at 65 knots even after the field was made. I should have added a little extra speed on final because of the gusty winds.

I took us the rest of the way back to Waukegan and got into the right downwind for runway 23. Sandy asked the controller for a short approach and pulled the power abeam the numbers. I usually do a good job at this maneuver and I turned toward the runway at what I thought was a short final. I wasn’t in close enough this time though and the strong wind blew us so far out that I would not have made the field. I had to use the power to get us to the runway. Another lesson learned. This was a very good session – the wind taught me a lot.