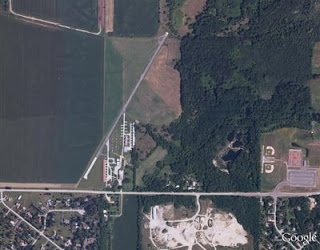 Friday afternoon brought some the best weather of any flying day I have had this year. We were expecting a big snow storm late in the evening (and we did get it) but, ahead of the storm, we had only high clouds and big blue patches. The wind was shifting around a little but was light enough that it wasn’t a problem.

Once outside the hanger and ready to go, I called ground for a VFR departure. ATIS had reported winds 250 at 7 knots with runway 23 in use but the controller offered me the choice of runway 32 or 23. Since the club is located just off the end of runway 32, we opted for the short taxi and almost straight out departure to the practice area. I got the gear up, the airplane setup for cruise climb and up we went to 3000 feet. I leveled off there and then configured for another climb to 4000 feet and another level off.

Pete asked for a steep turn in each direction and, as I rolled out of the second one, he pulled the power. I pitched up a little to slow to 75 knots and grabbed the emergency checklist. With no restart, I looked for a place to go. I knew Westosha was nearby so I looked for that first. As it turned out, we were right over the top of the runway. I dialed in the CTAF, announced we were over the field at 3300 with a simulated engine out and started my spiral down. After 3 turns, I rolled out on the downwind for runway 21, put the landing gear down and flew a tight pattern. Unfortunately I still ended up a little low and had to use just a touch of power to make the runway. I think it was the extra drag from the gear that threw me off. I should have lowered the gear while I was still high so I could have gotten stabilized earlier. I will have to try some more power off landings to get a better feel for how the configuration changes effect the Cutlass’ glide.

We left Westosha and went back into the practice area for some autopilot familiarization. It is a basic unit with no altitude hold so it was mostly just using the heading bug to command turns. There is a nav switch but, we couldn’t get it to track a VOR. I can play more with that on my own later.

Back in the pattern at Waukegan, I did 3 more landings and another go-around. I still need 2.3 hours to finish the club requirements so, it might take another two flights to get done. That’s fine. It’s all flying time.