A Day for the Birds 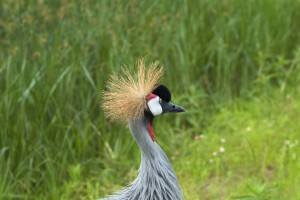 We get up to the Wisconsin Dells area often and we always see the signs for the International Crane Foundation. We had talked about stopping before but we just never got around to it. Saturday we finally made that long delayed visit.

The ICF was founded in 1973 with the purpose of preserving these rare birds worldwide. Today, the Foundation is involved in crane preservation around the world. The original facility at Baraboo, Wisconsin maintains a collection of captive birds for three purposes. Education, captive breeding and reintroduction of cranes into the wild. All fifteen of the world’s crane species are represented there.

Guided tours are available but Georgia and I elected to explore on our own. We started at the crane sculpture depicting Whooping Cranes taking off and then visited the educational center to learn more about the ICF and about cranes. The center includes hands on exhibits and video displays that give a good introduction. Paved pathways made it easy for Georgia to use her TravelScoot to get around the grounds.

From the education center we followed the pathway to the three main crane exhibit areas. First is Spirit of Africa where cranes from the African continent are kept. In the visitors center, we had been told that cranes are very territorial and that when they come up to the fence they are being aggressive and not friendly. We saw that behavior at the first pen we stopped at and at every enclosure after that. The birds always came right  up to the wire to confront us. 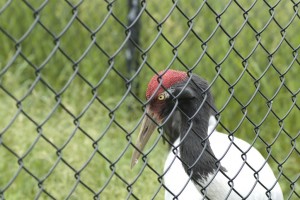 From the Spirit of Africa area we went on to the Johnson Exhibit Pod when most of the cranes are kept. The circular area is divided into pie shaped enclosures which each house a pair of cranes. It was generally the males that came up to challenge us although, in some cases, both birds would come forward. It made it easy to get closeup photos but hard to get them without wire in the way. 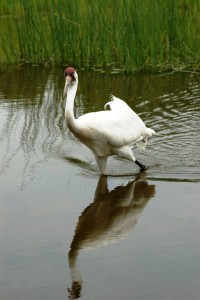 The last enclosure is the Whooping Crane exhibit. In this area there is no wire between visitors and the cranes. Instead, a seating area is on one side of a pond with deep water close to that side. The Whooping cranes will wade into the water but not go into the deep part. These birds, like all the cranes in the ICF have their flight feathers clipped so they can’t fly over fence or the pond. We spent a long time just watching the male crane feeding in the water.

A video presentation here explains the efforts of the ICF and other organizations to reintroduce the Whooping Crane into the wild. Habitat loss has made this the most  endangered of all the crane species with numbers falling to as low as 16 birds in 1942. The only remaining wild flock summers at Wood Buffalo National Park in the Northwest Territories, Canada and winters in Aransas National Wildlife Refuge, Texas. Today, the ICF supports the reintroduction of other breeding populations into the wild. A flock was established at Necedah National Wildlife Refuge in central Wisconsin. To get the young birds to migrate to Florida each fall, they are led south by ultralite aircraft as part of Operation Migration.

Three fledgling birds from this flock were hatched in the wild before this year when four hatched. This is still far from a sustainable breeding record and more captive hatched birds will have to be introduced into the flock in years to come. It is a big step in the right direction though and a second reintroduction site in the Horicon National Wildlife Refuge in Dodge County, Wisconsin is planned for early fall of this year.

We really enjoyed our visit to the International Crane Foundation. If you are in the Wisconsin Dells area, take a little time away from the crowds and pay them a visit. You and the cranes will both benefit.

The ICF is just a short distance from the Ho-Chunk Casino so we had to visit there of course. We went for the Saturday prime rib and crab leg buffet and stayed for the slot machines. It was a rare good day of gambling for us as we came away with more money than we started with. We weren’t big winners but we had a few hours of fun and a good dinner paid for by the one armed bandits.

Previous Post A Day at the Races Next Post Sporty’s “Flying With the iPad, iPhone and Android”