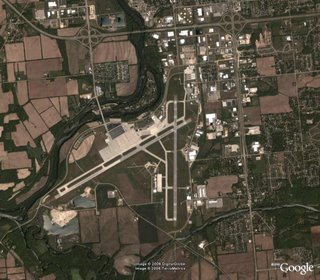 My first night flight got me 1.5 hours of night flying and three night landings. I need a total of three hours, ten landings, and one night cross country to qualify for private pilot. Last night, we finished off all those requirements. I chose Rockford as the destination because it satisfied the cross country requirement and gave me experience with one of the few remaining TRSA airspaces.

The cruise to and from Rockford went fine. I didn’t get lost and I am actually getting much better at matching what I see on the ground with the chart. I stayed ahead of the frequencies so that the radios were already set up when I needed them.

The night landings required for the private pilot certificate must be to a full stop. The tower controller suggested an interesting procedure that saved a lot of time. I would land on runway 19, exit taxiway D, do a 180 and hold short of the same runway until ready to go again and then do an intersection takeoff. That meant that I was using the first half of the 8000 foot runway for landings and the second half for takeoffs. Pretty slick! The first couple landings were not easy for me. I had some trouble keeping the runway in sight. Sandy suggested using the taxiway parallel to the runway and that did seem to be easier to see in the dark. The last two patterns were better when I did that. I also had a little trouble judging my height about the runway. I flared just a little high every time.

The air was smooth for most of the flight but very rough right in the vicinity of UGN. The ASOS was reporting winds 210 at 16 – no gusts in the report. As I came down through 2000 feet I started getting bounced around and, by pattern altitude, it was a real struggle to just hold a heading. I kept my speed up on final and got down without any real problem but, it was very hard work. Sandy was following through on the controls just in case I got in trouble but didn’t have to help. After that, I thought we might quit and to the other two landing another night. Sandy, on the other hand, thought the tough conditions would be good practice so we went ahead and finished them up. It really was good experience and my landings were not too bad at all. Once we parked, I realized I was totally wiped out from the effort of fighting the turbulence and from the concentration it took.